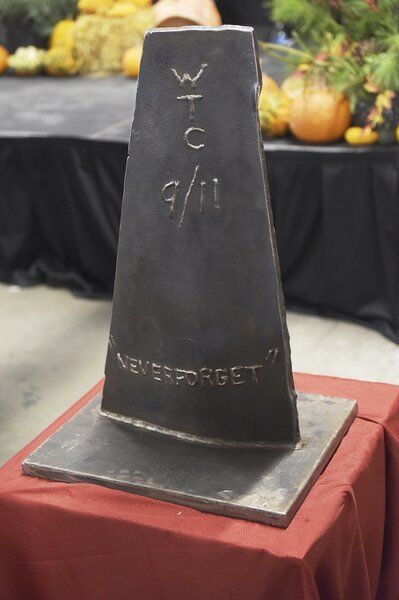 TIM JEAN/Staff photoA piece of the World Trade Center arrived at Londonderry's Central Fire Station in 2019. The local Fire Department honors Sept. 11, 2001, every year with remembrances and has a memorial at the station on Mammoth Road. 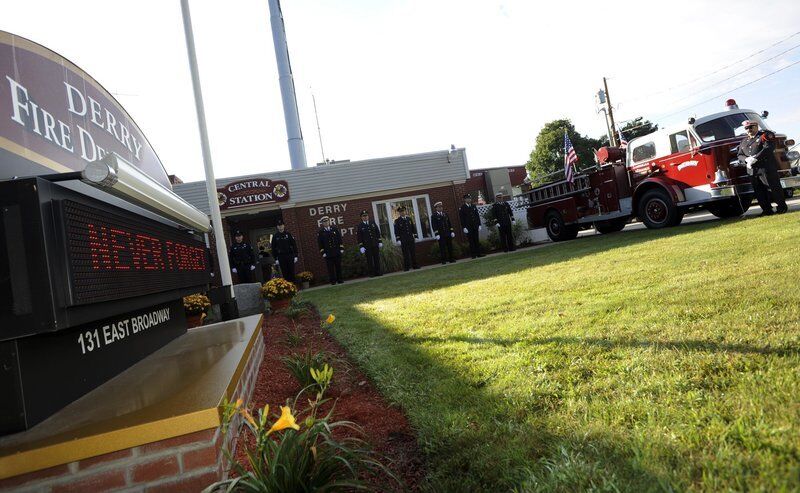 TIM JEAN/Staff photoA sign spells out "Never Forget" as Derry police and fire officials, along with residents, honored the anniversary of 9/11 back in 2011. Communities will honor the 20th anniversary this year with small, solemn services as the pandemic continues.

TIM JEAN/Staff photoA piece of the World Trade Center arrived at Londonderry's Central Fire Station in 2019. The local Fire Department honors Sept. 11, 2001, every year with remembrances and has a memorial at the station on Mammoth Road.

TIM JEAN/Staff photoA sign spells out "Never Forget" as Derry police and fire officials, along with residents, honored the anniversary of 9/11 back in 2011. Communities will honor the 20th anniversary this year with small, solemn services as the pandemic continues.

It was a day like any other, Gagnon, then a lieutenant with the Derry Fire Department, recalled.

Then the first plane hit the World Trade Center in New York City.

"The TV was on in the background," the chief remembered. "We stopped the meeting to watch. You could have heard a pin drop in the room. We were astonished at what we were seeing. Then the second plane hit. We knew then it was a real problem."

With the 20th anniversary of the Sept. 11, 2001, attacks coming up, the fire chief and others remember how that day transpired, from the morning rituals of an otherwise normal day into a day that annually brings a flood of memories.

"We were in shock like everyone else," Gagnon said, adding the Derry department started gathering a list of personnel to be available to go to New York City if needed.

"And no one knew what other things could be expected," he said.

Gagnon said he and fellow firefighters went to Ground Zero only a month after the attacks, attending funerals for fallen firefighters.

"It was quite a time down there, people were respecting each other," he said.

That day united the nation, Gagnon said, adding that 20 years later he is concerned about people often not respecting each other's opinions or beliefs.

"It didn't matter then about your political beliefs," the chief said. "Now, not the case."

Steve Fruchtman served as Windham's fire chief from 1999 to 2002 and on that day he was in his upper-level office at the town's fire station.

"The firefighters in the day room had the television on," Fruchtman said, adding that someone then came over the intercom telling him to come downstairs to see what was going on.

"I made a beeline to the day room," Fruchtman said. "Some of our off duty firefighters were coming to the station."

"We were trying to think about what was going on," he said. "But calls continued to come in during the day."

Windham firefighters were also ready to jump in and help if needed, Fruchtman said.

"I don't think anybody in fire service was unaffected by that day," he said.

Fruchtman and others also traveled to New York City to attend funerals.

Londonderry Town Manager Kevin Smith, 24 at the time, was working for then U.S. Sen. Bob Smith at his office in Manchester. Staff members there and other nearby offices heard the news of the planes hitting the towers in New York. The offices closed and staff members were sent home.

"I can also recall trying to reach my Dad who was working at the Federal Reserve Bank tower in Boston," Smith said, "to urge him to leave the building ASAP, as we were all uncertain as to which buildings might also be targets."

Londonderry Town Council Chairman John Farrell said 20 years ago he was working for a Los Angeles-based company and flying back and forth for work often.

"It was my off week and (I was) scheduled to work in New Hampshire," Farrell said. "I was at home when my wife's best friend called to ask where I was that week. After she found out I was home, she said to turn on the television and we saw the second plane hit the tower."

In the 20 years since, the Londonderry Fire Department has hosted annual remembrance ceremonies to honor Sept. 11. The Central Fire Station on Mammoth Road also received a piece of the World Trade Center steel that is on display and will be part of a larger memorial.

Smith said up until that day, he enjoyed a world of relatively peaceful times. But Sept. 11, 2001 was life changing, he said.

"With the advent of the terrorist attacks that day, two things became very clear to me: one, the freedoms we enjoy as Americans come at a cost and we are not immune from outside and internal forces who are always seeking to disrupt and dismantle our way of life," Smith said. "Two, life is not a dress rehearsal. We cannot afford to take any days for granted and we should strive to live a life of purpose and service to others.

For Gagnon, it's a hope that the events of 20 years ago are never lost. He wants to always send comforting thoughts to the families and friends of those who were lost in New York, at the Pentagon in Washington, D.C., and on that rural field in western Pennsylania.

"And hopefully, some day our country can come together again as it were then," he said.