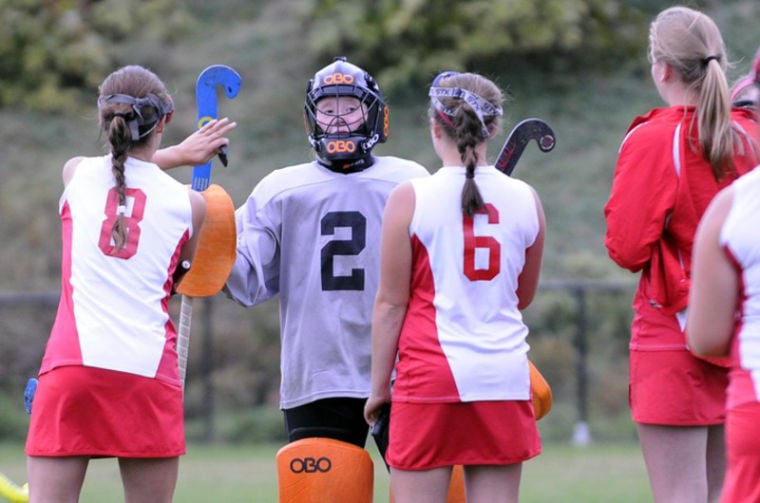 TIM JEAN/Staff photoPinkerton goalkeeper Abbey Doherty (2) gets some high fives from her teammates after shutting out Memorial High School, 6-0, in field hockey Oct. 16. 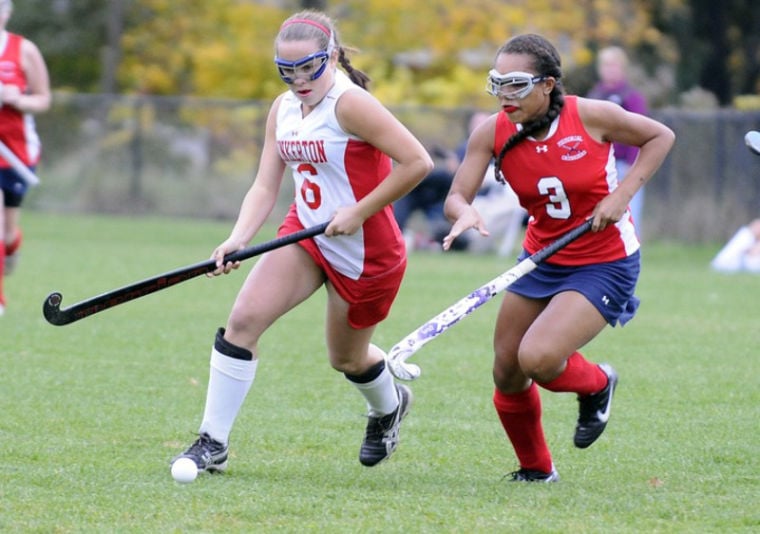 Pinkerton's Kaylie DeCosmo, left, outruns the Memorial High School defender to the ball during the first half of a field hockey game at Pinkerton Academy Oct. 16. Pinkerton won, 6-0.

TIM JEAN/Staff photoPinkerton goalkeeper Abbey Doherty (2) gets some high fives from her teammates after shutting out Memorial High School, 6-0, in field hockey Oct. 16.

Pinkerton's Kaylie DeCosmo, left, outruns the Memorial High School defender to the ball during the first half of a field hockey game at Pinkerton Academy Oct. 16. Pinkerton won, 6-0.

It was all about celebrating seniors for the Astros Oct. 17 when they hosted Merrimack. Two seniors, Zach Bell and captain Tim Wood scored Pinkerton’s two goals, all they needed for the win.

Goals were scored by Eddy Welch, Bennett Meagher, Cobi Moore and Connor Delea. Outside fullbacks Keith Reynolds and Dylan Harper played great defense in the back. Tucker Robbins kept another shutout in net.

Astros come back for win

The JV Astros had a slow start Oct. 17 against Merrimack. Pinkerton gave up a goal early, but got back on track.

Scott Sherman took a pass from Connor Rathburn, finishing it off with a perfect shot past Merrimack’s keeper to tie the game at 1. It took less than two minutes into overtime for Noah Davis to cross the ball for John Dipersio’s header goal for a 2-1 victory.

The Lady Astros hosted Nashua South Oct. 15 and controlled the game in the first half.

Astro Grace DiPersio cashed in with a nice left footed shot from 20 yards out off a pass from Katyann Grochmal 11 minutes in. Jacqui Wyka scored with just under 4 minutes to go before the half on an unassisted goal after a corner kick scrum. Pinkerton finished off the scoring 13 minutes into the second half when Reanna Romano rang a blistering 20 yard shot off the crossbar and Katyann Grochmal netted the rebound.

Call that a shutout

The Astros out-possessed the Merrimack Tomahawks, controlling the pace of the entire game. Sabrina Thomas, Marissa Clark, Emilie Laliberte, Ali Davis, and Sydney Hill were just some of the players connecting passes and possessing the ball.

The freshman Lady Astros took on a tough Bedford team Oct. 16, but could not capitalize on their few scoring opportunities. The game remained scoreless at half, but 15 minutes into the second half Bedford managed to put one in the net just out of reach of goalie Julia Bousquet.

Get out the broom

Victoria Walder had four kills and six aces on the day. Evan Duval was a force at the net with five kills during the match. Carly McDonough added three kills for the Astros, while Cheyenne Wright contributed two kills and three aces.

Whitney Leyland had three setting assists; Sarah Hicks had four assists and five aces. Sam Donahue had a fantastic serving game as well. Bianca Herlihy, Baylie Scheibert, Maggie Gildea, and Jocelyn Dennis were all instrumental in the win. Brenna Thibodeau and Alivia Connors were also big at the net with their consistent and aggressive play.

The JV Astros fell just short of beating the Merrimack Tomahawks on Oct. 17, 13-25 and 24-26. It was the best match of the season for the Astros. The team moved and played extremely well as a unit.

Cheyenne Wright was fantastic at the net for the Astros. Carly McDonough was tough at the net as well and also was phenomenal on defense. Wright and McDonough both had three kills on the day, with Wright adding two service aces. Jocelyn Dennis, Maggie Gildea, Bianca Herlihy, Baylie Scheibert and Victoria Walder all made amazing digs and passes throughout the match.

The Trailblazers won the race decidedly with a low score of 30 points. In first for the team was freshman Samantha Mangano, who ran a personal best of 20:43 and finished second overall. The Trailblazers took five of the top 10 places overall.

The Lady Astros shut out Memorial Oct. 16, 6-0, on senior day. The score was 5-0 at halftime. It was a hat trick for Julie Saltamartini. Samantha Day, Haley Harrington and Kaylie DeCosmo each added a goal. Assists came from Kaylie DeCosmo and Gabby Guerard. Abbey Doherty had 4 saves in net.

The JV Lady Astros topped Memorial, 3-0, Oct. 16. Goals were scored by Abby Amato, Maddy Lolicata and McKenzie Pierce. Emily Mosher had an assist and was awarded the game ball. Great hustle from Courtney DesRoches and Ally Rugg assisted in the win.

The JV Lady Astros finished their season with a 2-2 tie with Exeter. Goals were scored by Abby Amato and Maddie Lolicata. The game ball was given to Abby Amato for great hustle. Amanda Szostak, Bailee Freeman and Morgan Donahue had a great effort against Exeter.

The JV Astros hosted the JV State Championship on Saturday. The JV field hockey team beat Salem, Exeter, Bishop Guertin and Central, and tied the freshman Pinkerton Astros in the round robin tournament round. T

They beat Concord in a 7 vs. 7 sudden death win in the semis to go on to beat Salem, 1-0, with just seconds left in the championship game. Amanda Szostak was named All-Tournament.

The varsity Astros traveled to Manchester to take on West Oct. 18.

The Astros came away with the 63–12 victory. Peter Cyr returned an interception 99 yards to help the Astros improve to 5–2 on the season.

Pinkerton took a 36-14 lead at halftime and secured the game in second half to win. Pinkerton had several times inside the Concord 20-yard line, but did not convert in the second half. The score indicates a close game, but the Astros had control of game from start to finish.

The freshman Astros played the St. Thomas Aquinas Saints Oct. 17 and won, 37-6. The Astros dominated both the offensive and defensive sides of the ball.

Auburn - Fabienne Côté died on October 20, 2021 at St. Teresa's Rehabilitation and Nursing Center in Manchester, N.H, surrounded by husband and her children, who were singing to her as she drew her final breath. Fabienne was predeceased by her parents and three of four siblings as well as he…