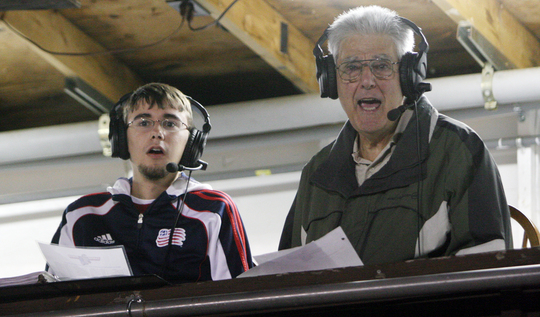 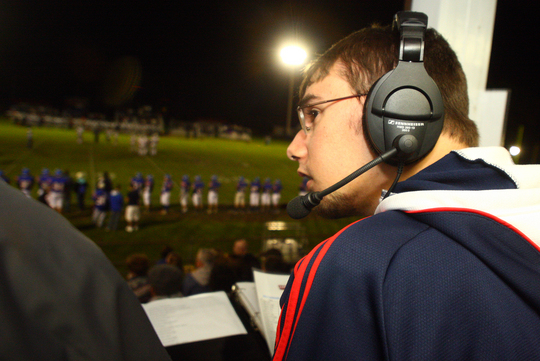 LONDONDERRY — Two years ago, Londonderry High's radio and TV production teacher Karen Robinson asked her radio broadcasting students if anyone would like to try their hand at announcing during the school's football games.

Then a sophomore, Anthony began training for live broadcasting that is now on the local radio and TV cable stations, as well as online in real time.

Color announcers assists the play-by-play announcer, often by filling in any time when play is not in progress. They provide background information on the players, such as statistics, strategy and injury reports on the teams and athletes.

This year, Anthony is getting more chances to be the play-by-play announcer, something he likes "way more," he said.

He has a faraway fan, too. Anthony's uncle is in the U.S. Navy. While in Belgium, he would listen to Anthony announce the Lancer football games online.

"That's really funny to do," he said. "It's not like a regular sport with all the balls."

Despite having muscular dystrophy, Anthony finds ways to get involved in sports.

In the spring, he is too busy for announcing because he's the varsity baseball team manager.

For the past few years, Anthony and his family have organized a bowl-a-thon to raise money for muscular dystrophy. The name of his team is the Mighty Ants.

"He's just a great kid," said assistant principal Katie Sullivan, who is Anthony's class advisor. "Every month, one of his teachers nominates him for student of the month."

Robinson said Anthony takes the time to read all the team stats.

"He knows a lot about the players," she said. "He's known most of them since he was little."

Robinson said not only is Anthony a great radio announcer for both TV and radio, but he is reliable.

"He'll be recognized on Senior Night at the football game," she said.

Anthony said he plans to study engineering in college and is leaning toward Northeastern University. He also is a member of the high school's robotics team, the PVC Pirates.

"But I'll still keep up with announcing, I hope," he said.

Anthony has a hard time getting up the bleacher steps to the press box on the football field.

Enter the Tailgators, a group of students who grill hot dogs, hamburgers and other food for the games.

"Now, when they see me arrive," he said, "they carry me up the steps."

Derry - Patricia J. Madden, 82, lifelong resident of Derry, NH, passed away Thursday June 17, 2021 at her home surrounded by her loving family. Pat was born in Derry on March 12, 1939, a daughter of the late Edward and Marian (Soucy) Olesen. She worked with her husband at Madden Appraisal Se…