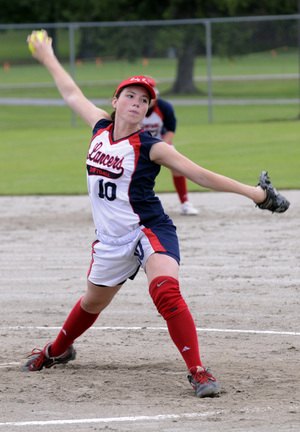 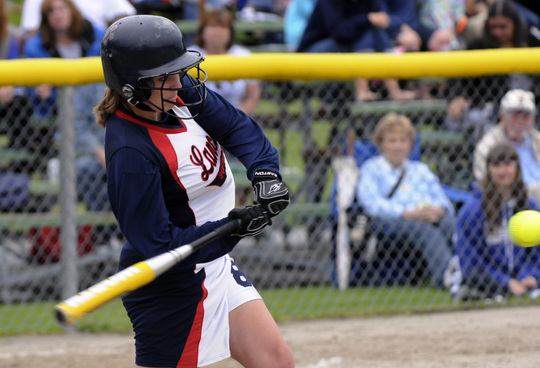 Salem pitching ace Nora Galvin and the Blue Devils (21-2) did have their hands full, however, with a Londonderry team (19-4) that pushed them to the limit.

Salem took a 1-0 lead in the second when speedy Steph Cabral smashed a line drive to left field that was misplayed. Then, when the cutoff throw to the infield was off the mark, she was waved home for what she jokingly said was her first home run.

But Londonderry pitcher Theresa Zwart (five-hitter, one earned run) was nearly as effective as Galvin, who threw a three-hitter, striking out 10, and the Lancers tied the game, 1-1, in the fourth.

Sam Nitso walked after working from an 0-2 count to lead off the inning, went to second on a bloop single by Emily Kraytenberg and then scored on a line drive single by Nicole Williams, who later added a mammoth two-out triple.

Salem grabbed the lead back in the fifth, however, when Sarah Frahm walked, went to second on a sacrifice bunt by Stephanie Long and, after a semi-intentional walk to Nicole Gubellini, scored on an RBI-single by junior catcher Jade Morrison.

And that was it for scoring, although Londonderry had opportunities.

The Lancers' leadoff batter reached base in four different innings (three on walks and one on an error), and Londonderry stranded seven runners.

In the top of the seventh, Londonderry appeared to have a final chance at tying the game.

With one out, leadoff batter Lindsey Bolduc reached base on an infield single only to be called out by home plate umpire Glen Colburn for making contact out of the batter's box.

"What a time to make that call," said Londonderry coach Wayne MacDougall. "That was very frustrating, to take us out of it like that."

MacDougall gave credit where it was due.

"We had runners on all day and, when it comes down to it, we just didn't get it done," he said. "We could have beaten them, but I give all the credit to them. They're not going to give up anything, and they're just a very tough team to beat."

The championship loss marked the third time that Salem has beaten Londonderry in the finals, having defeated the Lancers in both 2001 (3-0) and 2007 (5-1). Salem has now won 17 state softball titles overall.