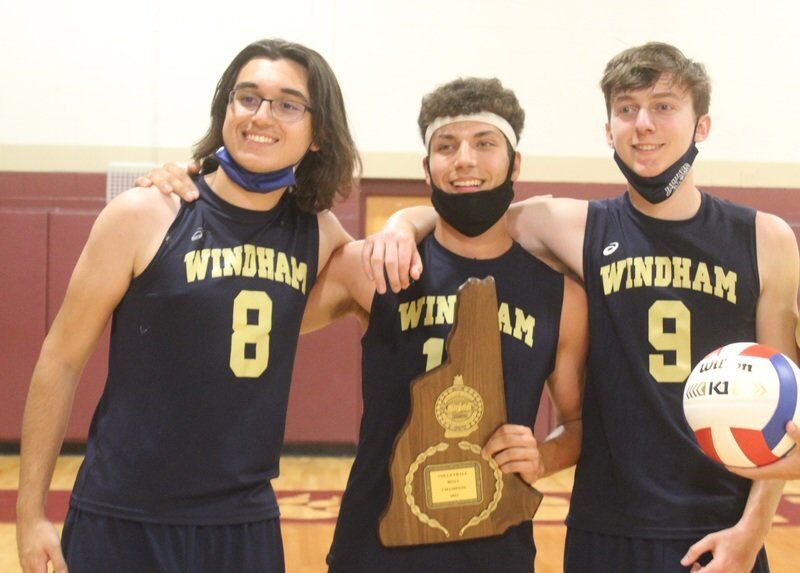 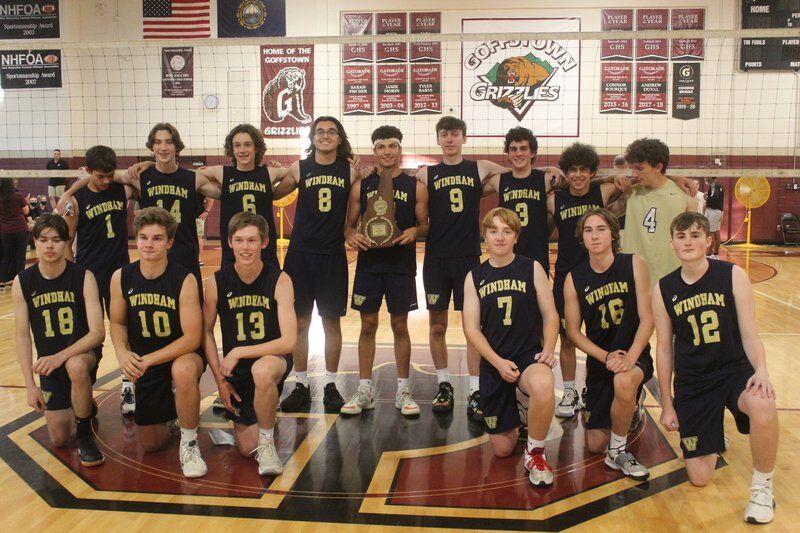 DAVID WILLIS/Staff photoThe Windham volleyball team poses with the trophy after winning the first Division 1 state title in program history and completing a perfect season with a win over Goffstown on Saturday.

DAVID WILLIS/Staff photoThe Windham volleyball team poses with the trophy after winning the first Division 1 state title in program history and completing a perfect season with a win over Goffstown on Saturday.

GOFFSTOWN, N.H. — A perfect season had a perfect finish for the Windham High boys volleyball team on Saturday.

For the first time in program history, the Jaguars are state champions.

Undefeated Windham held off a few tough runs early by a gritty Goffstown squad before the Jaguars pulled away late to sweep the Grizzlies 25-19, 25-17, 25-20 in the New Hampshire state championship game at Goffstown High School in front of a raucous crowd of a few hundred fans.

“I couldn’t ask for anything more than this,” said senior Jared Stivala. “This is amazing. I’m so happy to be here. This is a perfect way for me and my fellow seniors to end our high school careers. All the work, all the dedication, all the driving five hours for club volleyball was all worth it.”

The victory gave Windham its first boys volleyball title in its third championship game appearance. The Jags fell to Salem in 2013 and 2019. The 2020 season was canceled due to COVID-19.

“This is history,” said senior Jeff Draper. “It’s unreal. After all the hard work, and losing last season to COVID when we felt like we had a great team, it’s surreal to be here. We were so motivated to be in this moment right here, as state champions.”

The Jaguars also clinched their first undefeated (19-0) season in program history. They finished the spring with 3-0 shutouts in 11 matches, and had to hold on for just one 3-2 win, against Salem on April 21. Windham’s previous best season was a 17-2 record in 2019 on the way to the title game.

“To finish an undefeated season is just unbelievable,” said junior Kyle Gschwend. “We’ve put in so many hours to earn this moment. We knew we had a really strong team. Goffstown was tough, but we knew we could get it done.”

Goffstown (10-7), which upset Timberlane in the semifinals, was making its first volleyball championship appearance.

Windham entered the title game having already dealt Goffstown a pair of 3-0 losses during the regular season. But the Grizzlies were not going to go away quietly, jumping out to a quick 10-5 lead in the first set.

Windham was able to rally with five fast points, thanks to some tough serving from Braeden Manti and two spikes from Draper. After some back-and fourth, the Jaguars took command with six straight points with Stivala serving, and Gschwend knocking a soft shot over to clinch the set.

Goffstown then rushed out to 5-1 and 9-5 leads in the second. But the Jags once again stole back the momentum thanks to a Draper spike and six straight points on serves by Gschwend.

“We had to communicate,” said Gschwend. “Volleyball is pass, set, hit, that’s what it comes down to. We just couldn’t let their points bother us. We couldn’t let them get in our heads.”

Windham again fell behind in the third, but quickly retook control thanks to an ace by Draper and a block by freshman Jack Begley. Goffstown cut it to one point, but the Jags never let them tie it.

One point from a title, the referees conferenced before ruling the clinching point in favor of Windham.

“At first we weren’t sure if they were going to call the net violation (on Goffstown),” said Gschwend. “But I knew they were going to, so I was already celebrating. The whole team came over, the student section was going crazy. It was amazing.”

With head coach Matt Bynon away on a planned business trip, assistant Matt Heckler filled in as coach. Heckler also coaches at Bynon’s Mill City Volleyball Club that many of the Jaguars attend.

“It’s absolutely amazing what the kids did this year,” said Heckler. “Every single day, these kids showed up to work and got better. All year, coach Bynon and I have been coaching them to peak at the right time. They did that.”

After the final point, the Jags celebrated with the wild fan base.

“The perfect season is amazing,” said Draper. “But all that matters is a state title, and we did it.”

Windham High School has only existed since 2009, but perhaps no New Hampshire school can match the Jaguars in overall athletic dominance over the past decade.

Windham boys volleyball’s state championship victory on Saturday was the No. 29 overall team state title for the school.

Since New Hampshire began crowning a boys volleyball state champion in 2004, an Eagle-Tribune area team has won all but one title. Windham joins Salem (11 titles) and Timberlane (3 titles). The lone outlier is 2016, when Hollis-Brookline beat Timberlane.