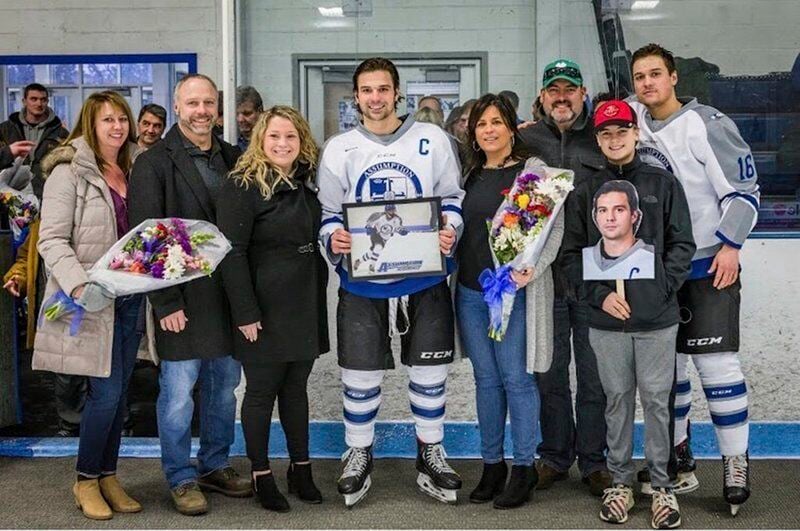 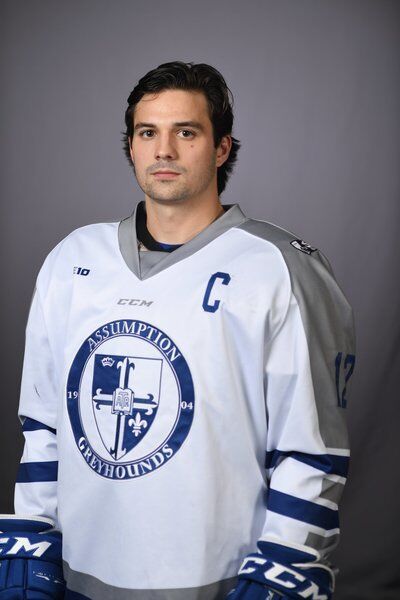 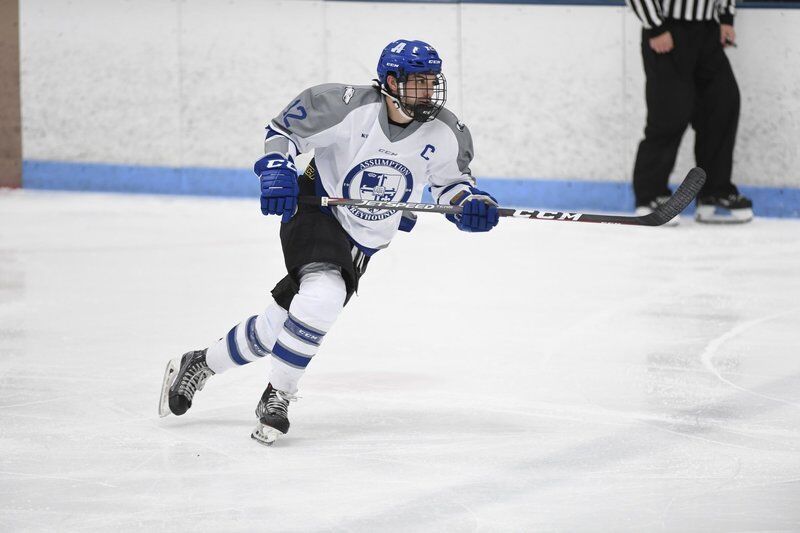 Many students enter college with dreams of becoming a doctor. Then they take, say, organic chemistry and make a beeline to the registrar’s office to change majors.

Brendan Philippon of Salem, though, was never one to take the easy way out.

He just completed his biology/pre-med studies at Assumption College in Worcester and did it with a 3.795 GPA on a 4.0 scale.

And being a college hockey standout is pretty close to another “full-time gig.”

Add in classes/labs and that is a crazy schedule.

After some soul-searching and some internships, the recent graduate decided not to attend medical school but to pursue a doctorate degree in neuroscience research. That is the study of the nervous system.

He doesn’t think he could have done it without his family.

“I owe a lot to my three parents,” said Philippon, who graduated in the top 5 percent of his class at Pinkerton Academy. “They were great role models for working hard.”

In a few short weeks, Brendan will be working as a lab research technician at the Byrne Neuroscience Lab at the UMass Medical Center in Worcester.

“I put a lot of time into it, for sure,” he said. “I graduated with everything I needed for med school. But I did an undergrad internship my entire senior year in that lab. I stuck with it. I fell in love with neuroscience.”

He’s applying to UMass in Worcester for its PhD neuroscience program.

“That’s my goal,” he said. “I may apply to a few other places. It’s usually a 5-6 year program. It’s a working position while on salary ... working and studying at the same time.”

After undergoing wrist surgery in April 2019, the 2019-20 season was idyllic for Brendan.

“It was a lot of time rehabbing. It made things tough,” he said. “It was a tough rehab to get back on the ice but I’m super grateful it worked out.”

He was on the ice for the first time with younger brother Colin, a freshman for the Greyhounds.

“In 20 years playing hockey,” said the 24-year-old forward, “it was the first time ever playing with my brother.

“And we were lucky enough to play on the same line. It was pretty awesome for the two of us and for my parents, who are always traveling all over New England. It was just an incredible experience. Amazing. We had good chemistry and a lot of success. Mom and Dad sure loved it.”

Brendan, a forward, had 5 goals and 6 assists for the 15-9-4 Greyhounds this winter. Colin, a freshman forward, added four goals and five assists.

He had four good years at the Worcester Catholic school, winning the Northeast-10 title as a freshman and collecting for his four-year career 18 goals and 22 assists.

Actually it was three good years. His sophomore year, the 5-11, 190-pounder had just one assist in 27 games.

“That was a tough one,” admitted Brendan. “There was a lot of adversity.”

The Philippons were split on Salem High and Pinkerton Academy. Their father lives in Derry and their mother lives in Salem.

Mom was a three-sport athlete at Salem High. Older sister Alex Philippon, 26, was a cheerleading captain for the Blue Devils.

But Brendan and Colin both graduated from Pinkerton. They have a young brother, a hockey player, naturally. Owen Doherty, 13, attends Salem’s Woodbury School.

Brendan said, “It was 50-50 custody with my parents. We had the choice Pinkerton or Salem. I chose Pinkerton pretty early on.”

And both boys also played for the powerhouse Pinkerton lacrosse program.

Philippon had scored 19 goals as a sophomore that winter. He went on to play for the Valley Junior Warriors out of Haverhill, then the New Hampshire Junior Monarchs and then left home to play for the Philadelphia Flyers Juniors squad in suburban Philadelphia.

Colin has a 3.5 GPA. Their cousin, 6-foot-7, 290-pound Chris Marinelli from Braintree, Massachusetts, started two years on the offensive line at Stanford (Class of 2010).