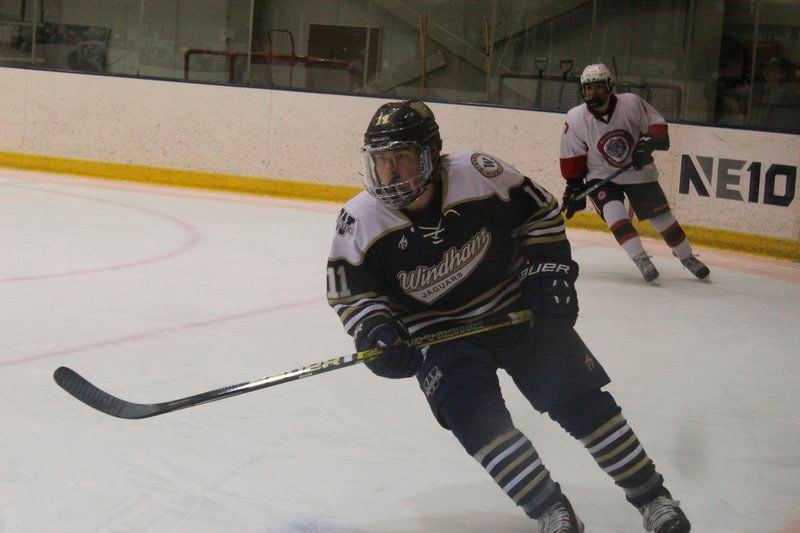 DAVID WILLIS/Staff PhotoWindham’s Jack Flanagan goes after the puck behind the net against Bedford in the Division 1 quarterfinals on Saturday. 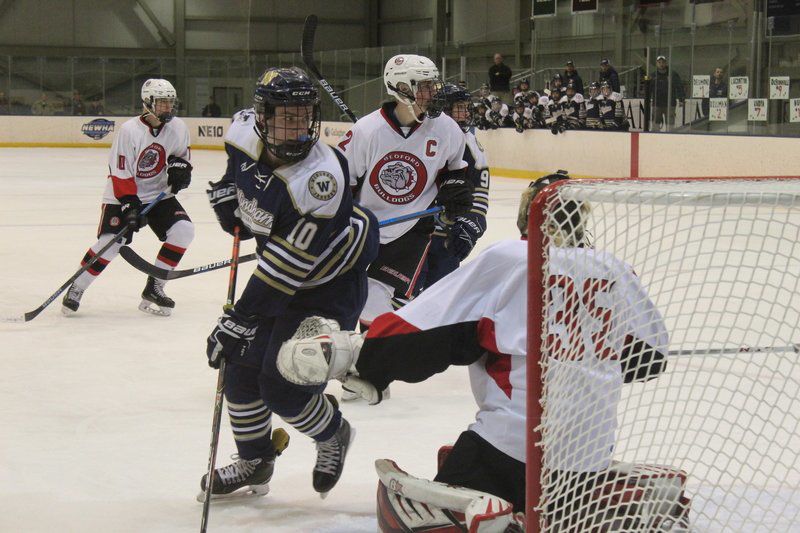 DAVID WILLIS/Staff photosWindham’s Charlie Breen plants himself in front of Bedford goalie Shea Guimont looking for a scoring chance in the Division 1 quarterfinals. 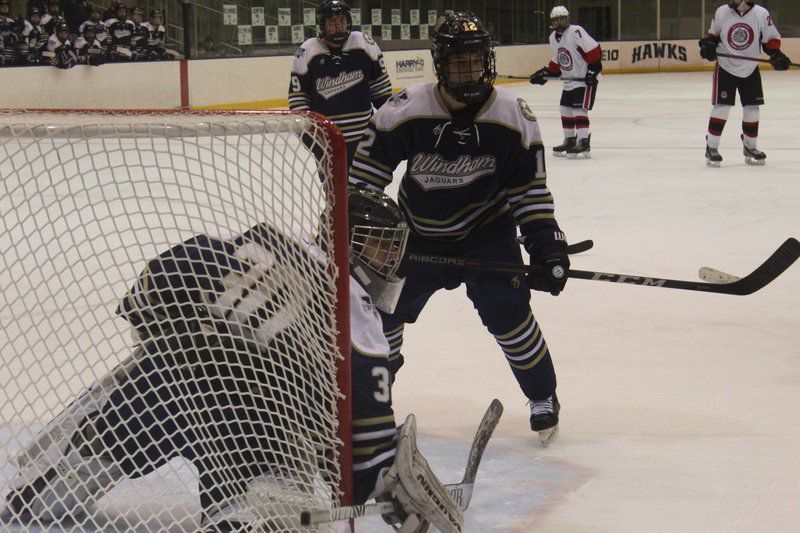 DAVID WILLIS/Staff PhotoWindham’s Jack Flanagan goes after the puck behind the net against Bedford in the Division 1 quarterfinals on Saturday.

DAVID WILLIS/Staff photosWindham’s Charlie Breen plants himself in front of Bedford goalie Shea Guimont looking for a scoring chance in the Division 1 quarterfinals.

MANCHESTER, N.H. — Windham matched Bedford shot for shot in the first period, and controlled play for nearly the entire third. But the middle period doomed the Jaguars.

No. 2 Bedford struck for all five of its goals in the second period, on the way to defeating No. 7 Windham 5-2 in the Division 1 quarterfinals on Saturday at Sullivan Arena at Saint Anselm College.

“I thought it was a good effort overall by our guys,” said Jaguars head coach Shawn Dunn. “But everything Bedford threw on net in that second period went in. Every game has lulls like that, and during our lull, everything fell for them, which was tough. But I’m proud of what we did overall today.”

Both teams came out flying in the first period. Windham (12-8-0) had a few golden scoring chances, but hit one post and saw Bedford goalie Shea Guimont come up with some huge saves to keep it 0-0 after one. Bedford (15-3-1) grabbed the lead 1:12 into the second. Jaguar Jack Flanagan made a stellar play, diving to block a shot near the net on a one-on-one. But the Bulldogs’ Will Scott controlled the loose puck and scored.

“We really matched them in the first,” said Dunn. “But after they scored their first goal, our bench kind of sank. After that, it just kind of happened rapid-fire. Every single shot they took went in, and that was unfortunate.”

Bedford made it 2-0 with 7:09 to go in the second, and tallied three more goals over next five minute to make it 5-0 heading into the third.

Windham, however, did not go away quietly.

Just 33 seconds into the third, the Jags’ Michael Montanile surged into the zone and roofed a puck over the goalie’s right shoulder to make it 5-1.

“Montanile had a great night,” said Dunn. “He came out in the third and buried that goal to change the momentum and make the team believe again. He played huge minutes, along with Owen Larouco. We only played two centers for the entire game. For them to be running every other shift against a top opponent is impressive.”

Three minutes after that, Windham defenseman Aidan Gravell took a Bobby DiCicco pass and blasted a shot glove side and into the net to make it 5-2.

The Jaguars continued to apply pressure for the rest of the third, but could not light the lamp again.

“It really showed a lot about these kids that they could come out in the third and control the game,” said Dunn.

“If you look at any preseason rankings, no one thought we were even going to make the playoffs. But to make the second round and make life tough for the No. 2 team, I don’t want to say I’m happy because we lost, but I consider this season a success. This senior group laid the groundwork for a successful program in the coming years.”