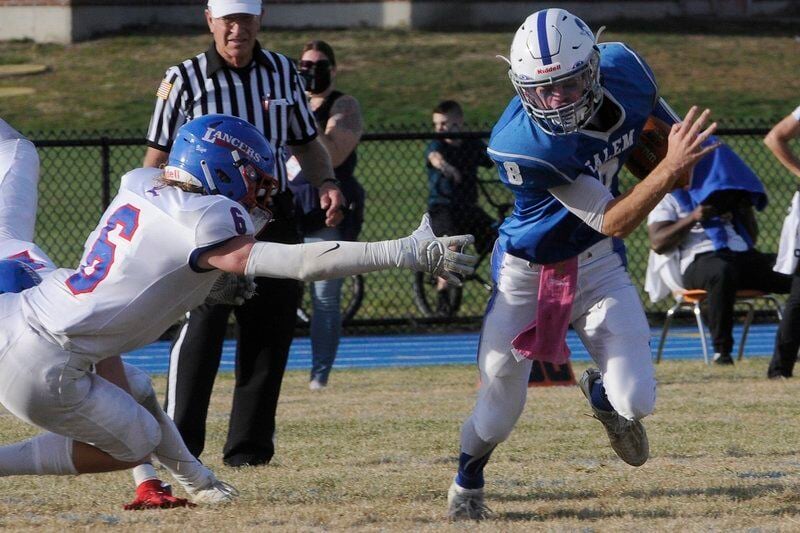 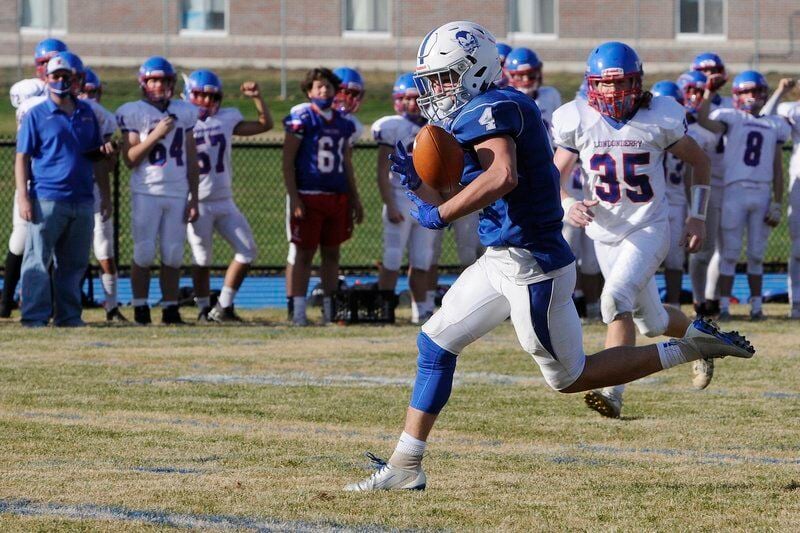 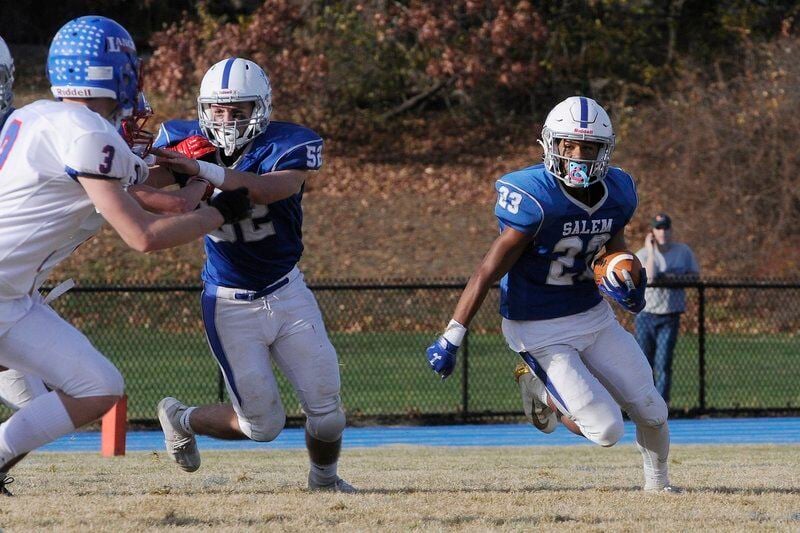 TIM JEAN/Staff photoSalem running back Dante Fernandes  runs for a gain during a Division 1 quarterfinal win over Londonderry. 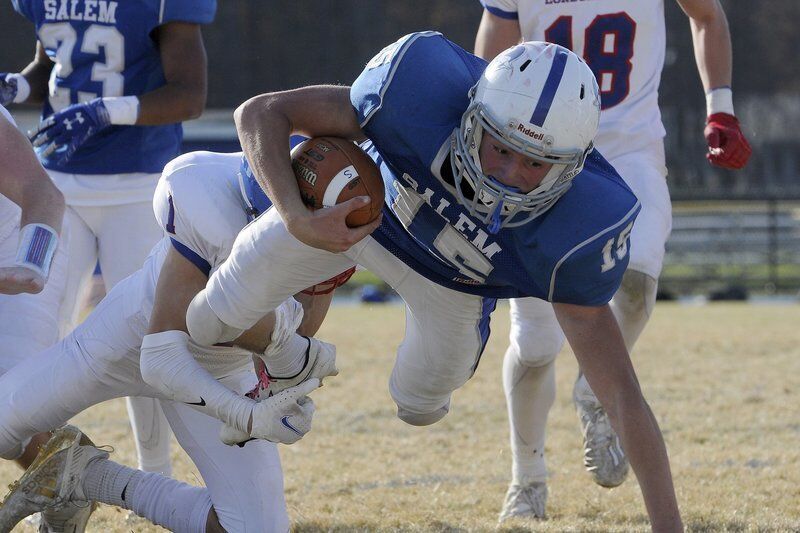 TIM JEAN/Staff photoSalem's Aidan McDonald ran for the go-ahead touchdown and  made the game-clinching tackle in the Blue Devils' Division 1 quarterfinal win over Londonderry.

TIM JEAN/Staff photoSalem running back Dante Fernandes  runs for a gain during a Division 1 quarterfinal win over Londonderry.

TIM JEAN/Staff photoSalem's Aidan McDonald ran for the go-ahead touchdown and  made the game-clinching tackle in the Blue Devils' Division 1 quarterfinal win over Londonderry.

SALEM — With the game, and a trip to the Division 1 state semifinals on the line, Salem’s Aidan McDonald had a hunch.

“They brought their big running back in, so I knew they were going to run up the middle,” said McDonald, a linebacker. “It was a lucky guess. I went in, wrapped him up, and I think Jake (Brady) and a few other guys came in to bring him down. It was unreal.”

With four seconds left in the game, and the ball on Salem’s 1-yard line, Londonderry ran a dive up the middle that McDonald and a pack of tacklers stuffed at the goal line as the clock ran out. That clinched the Blue Devils’ thrilling 21-13 victory over the defending state champion Lancers in the Division 1 quarterfinals on Saturday afternoon.

“A four-game losing streak to one team (Londonderry) does a lot to you,” said Brady. “We came in here with a lot of passion, and we went out and won it. This was a dogfight that was a game until the final seconds. Everyone was yelling. It’s amazing to know it’s over and we won.”

The win sends Salem (5-1) to the Division 1 semifinals for the fourth straight season. The Blue Devils will take on Nashua North (5-0), the No. 1-ranked team overall in the state, likely on Saturday at 1 p.m.

“This is by far the most excitement I’ve ever felt,” said Blue Devils quarterback Cody Clements. “Londonderry shut us out (16-0) earlier this year, so to win a playoff game against a great team like this is so big. Now we’re one win from the championship.”

Salem took control right away on Saturday. Noah Poulin recovered a fumble on the game’s second play, and eight plays later Dante Fernandes ran in for a 4-yard touchdown.

But Londonderry responded with two long scoring drives, with a Salem turnover on downs in the middle, to take a 13-7 lead with 4:31 left in the first half.

McDonald, however, gave Salem the lead right back, when he broke a 68-yard touchdown run with 3:09 left in the half.

“I read Noah (Poulin’s) block then beat the safety,” said McDonald, who ran for a game-high 121 yards on 21 carries. “I got into the end zone, and I was so excited.”

Salem’s Kaleb Bates then grabbed his first of two interceptions on the day. But, four plays later, the Blue Devils faced a fourth-and-10 from the Londonderry 16-yard line.

“We called a fullback drag (pass) across the middle of the field,” remembered Clements. “I saw Brady wide open, and I had trust in him to catch the ball and give us the lead.”

Brady was able to extend his right arm, hauling in the pass with one hand and holding on for a highlight-reel 16-yard TD grab.

“I was a little nervous having to reach for it,” said Brady. “But once I had it in my hand it felt good. We needed that score right before halftime, Cody trusted me to go get it, and I had to come through.”

After halftime, the defenses took over, with Salem forcing Londonderry into turnovers on their first four possessions of the second half.

First, linebacker Damian Gigante stuffed Londonderry at the Blue Devils’ 6-yard line on fourth down for a turnover on downs. A possession later, Salem caused a fumble that was recovered by Fernandes.

Fernandes then intercepted a pass to end a possession, and Bates added his second interception of the day with just 1:03 left in the game.

But, with Salem still leading 21-13, Londonderry delivered a stop on defense, then one final drive.

Londonderry completed three long passes, the last to the Salem 1-yard line, where McDonald made his first game-saving tackle with 0:04 left, setting up one final play.

“Everyone came together to make that final play,” said Brady, who made a game-high 12 tackles. “Everything was moving quick, the clock was running down and the pressure was high. We just had to keep our composure, and we made the play.”

McDonald, Brady and a few teammates made the stop, setting off a wild celebration on the field.

“This was a battle to the end,” said first-year Salem head coach Steve Abraham. “Their kids are tough, but so are our kids. I told the guys, ‘I believe in you, and here’s what I want. I wanted to meet you in the end zone after the game and say that we have practice on Monday.’ They battled through adversity and answered the call today.”