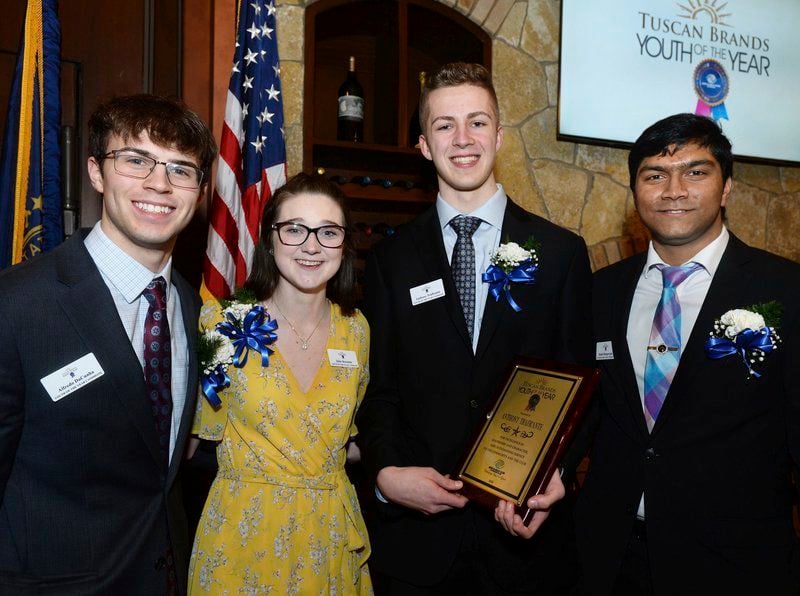 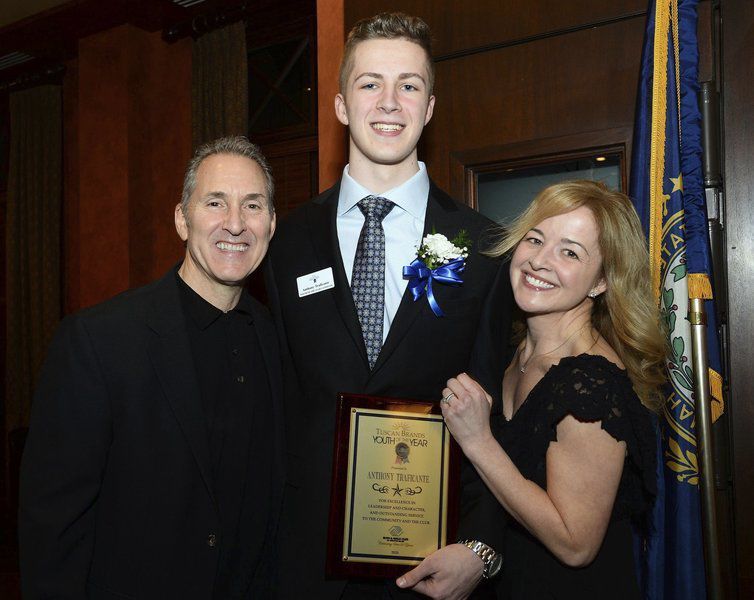 Anthony Traficante of Londonderry, center, poses with his parents Gerry and Mary Scaccia. Traficante, a senior at Central Catholic High School in Lawrence, was selected as the Boys & Girls Club of Greater Salem Tuscan Brands Youth of the Year.CARL RUSSO/Staff photo

Anthony Traficante of Londonderry, center, poses with his parents Gerry and Mary Scaccia. Traficante, a senior at Central Catholic High School in Lawrence, was selected as the Boys & Girls Club of Greater Salem Tuscan Brands Youth of the Year.CARL RUSSO/Staff photo

SALEM — Anthony Traficante, the 2020 Boys & Girls Club Youth of the Year, is a hard-driving young man.

Last winter, members of Keystone, the club’s community service program, were told that if they sold 100 dozen Kristy Kreme doughnuts, they would win a trip to Orlando, Florida to attend the National Keystone Conference.

Traficante, a senior at Central Catholic High School, went above and beyond. He sold more than 130 dozen doughnuts in just two weeks. He also had to perform 75 hours of community service to win that trip.

“With the challenge set, I took off not only running, but sprinting,” he said in his speech at the Tuscan Brands Youth of the Year Celebration Dinner held at the Tuscan Kitchen Thursday evening. “I emailed nearly every member of the club board. I pestered all of my friends and family and put countless hours into this project. Time to make the doughnuts!”

Traficante, of Londonderry, was a finalist for Youth of the Year in 2018 and 2019. Obviously, this guy does not give up.

“When I think about the club’s slogan, Great Futures Start Here, I realized: My early days in the homework room helped me to become a member of the National Honor Society. My time in the gym prepared me to become a captain of the Central Catholic basketball team,” he said.

Storniolo, of Atkinson, was open about her struggles with depression. Last June, she suffered a tragedy when her boyfriend, Ryan Driscoll, who had just completed his junior year at Central, died in a car accident. He was 16.

She works at the club as a youth development professional.

“Working at the club allowed me an outlet to push past my issues,” she said in her speech. “When I was younger, I wished there was someone I could relate to. Now in my role as a youth development professional I strive to be the person I wish was there for me.”

Rangarajan joined the club 12 years ago, when he was “a little boy with big, brown eyes,” he told the audience of 130 people. He credited the club with transforming him from a shy boy who wanted to be picked up and brought back home to someone who “didn’t want to leave anymore. I found a new sanctuary, a new home within the Boys & Girls Club.”

Wherever he attends college, he said he intends to organize a club “that will seek to mentor and tutor kids at the local Boys & Girls Club.”

DaCunha said the club provided him with much-needed support when his parents divorced and he had to adjust to a stepfather. He offered a sobering message. His favorite rapper, Juice Wrld, died of a seizure caused by toxic levels of oxycodone and codeine only a few days after turning 21 – just five years older than DaCunha.

“Had I gone down the wrong path, I could have been on track to reach a similar fate,” he said in his speech. “Instead, I had a safe place to go after school, strong role models and a great deal of determination to guide me; all provided by the Boys & Girls Club.”

DaCunha said he would like to pursue a career in acting. Rangarajan aspires to be a biomedical engineer while Traficante plans to become a chemical engineer. Storniolo hopes to attend the University of New England and study biology. She said she would like to be a medical examiner.

“They’re all winners in my eyes,” said Joe Faro, owner of the Tuscan Kitchen, who presented the Youth of the Year award. Anybody who attended the celebration dinner would probably agree.