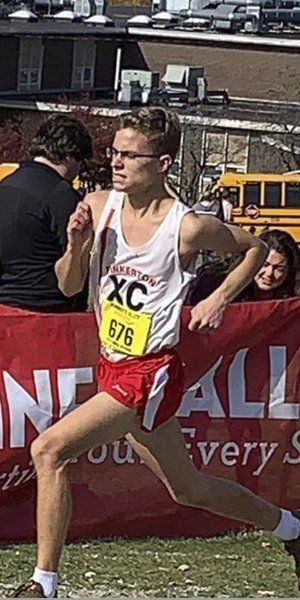 Courtesy photoPinkerton's Luke Brennan gives it his all while competing in the Division 1 state meet. 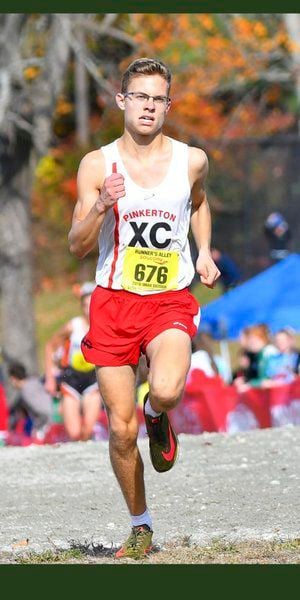 Courtesy photoPinkerton's Luke Brennan finished fourth in the Division 1 state meet, was fifth at the Meet of Champions and was the top local finisher at the New England meet.

Courtesy photoPinkerton's Luke Brennan gives it his all while competing in the Division 1 state meet.

Courtesy photoPinkerton's Luke Brennan finished fourth in the Division 1 state meet, was fifth at the Meet of Champions and was the top local finisher at the New England meet.

There’s an old saying about cross country runners that is generally true.

“The best runners develop in the summer, the best teams develop during the season.”

Sometimes, however, the elite runners also show great improvement during the season as well, as seems to be the case with Pinkerton sophomore Luke Brennan.

Brennan enjoyed a fine freshman campaign with the Astros, cracking the top five and running a respectable 16:49.9 at the Meet of Champions. But the step forward he took this fall was truly remarkable.

Early in the season, Brennan broke 16 minutes for the first time for 5K, recording a 15:59.6 at the Nashua Invitational. Five weeks later on the same Mines Falls course, he ran a startling 15:35.4, which broke a school record previously held by UNH runner Nico Sevilla-Connelly.

The week before in the Division 1 state meet while placing fourth, Brennan ran 16:06.2 on Derryfield Park’s challenging 5K course — an improvement of more than a minute in just a year.

There is now no question that Brennan has emerged as the top sophomore in the state and one of the top runners in just a matter of two months. But how has he done it?

“I think it’s a combination of coaching and my teammates,” said Brennan. “Coach (Mike) Clark designs his training so we peak at the end of the year and my teammates really pushed me.

“(Newcomer) Stephen Connelly has really elevated not only me but the whole team and Nolan Preble has been a big help to me as well.”

“I’d been watching them (Pinkerton’s runners) for a long time and I heard all the things about running for coach Clark and the Long Red Line — you want to be part of it. I was really looking forward to it.”

And so far, the stories have proven true, especially about running for Clark, who just completed his 38th year as head coach.

“Running for him (Clark) is amazing,” said Brennan. “He totally motivates you and you learn so many life lessons. He’s so inspirational.

“You could see with the seniors how emotional they were at the end of the season. I know they’re going to miss coach Clark.”

Clark certainly appreciates the sentiments, but he also feels that Brennan is “a very special young man.

“He’s got the skill set — his mechanics are spot on — but the main thing is that he’s very dedicated and hard working. He’ll do what it takes to be the best. He has all the attributes to be a great one.”

And, after that, he’ll start gearing for the 2020 cross country season with two goals in mind.

“My biggest long range goal is to win the Division 1 (individual) state championship, which I’m going to try to do next year, and help the team win the team title,” said Brennan.

If he can make anywhere near the improvement next year as he did this year, both goals are within reach.

Just as remarkable in his improvement for the Astros this year and, considering the circumstances, maybe more so was senior Nolan Preble.

Preble came down with mononucleosis in September and his season looked to be in jeopardy. But, after taking time off, he came back gradually and then came on like gangbusters at the end of the season.

He was Pinkerton’s No. 2 runner at the Division 1 meet, turning in a Derryfield time of 16:37.5, and then he ran a stunning 15:46.6 at the Meet of Champions and followed that by running second on the team at New England.

As a frame of reference, Preble had never previously broken 17 minutes at Derryfield and his MOC time as a junior was 17:01.

“What Nolan did after having mono is truly amazing,” said Pinkerton coach Mike Clark. “He did everything right coming back gradually and used patience to a virtue.”