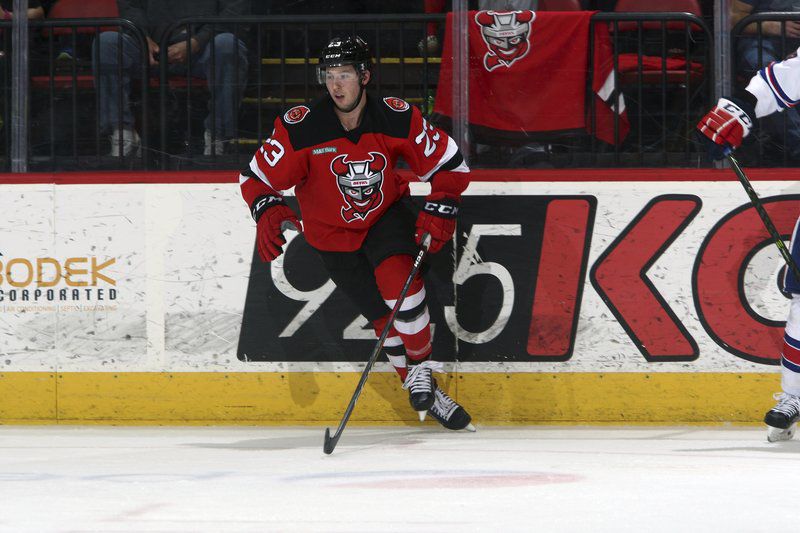 JustSports Photography/Binghamton DevilsFormer Pinkerton star J.D. Dudek made his professional debut with the AHL's Binghamton Devils at the end of the 2018-19 season. He is now looking for his next job. 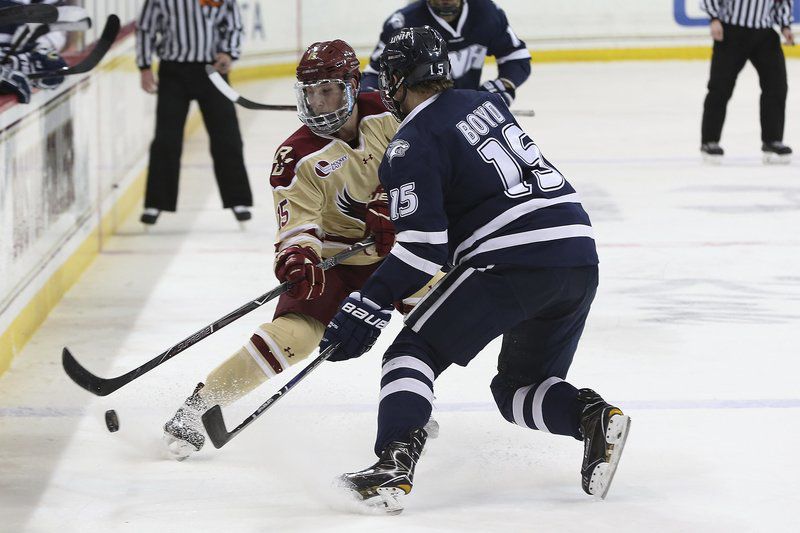 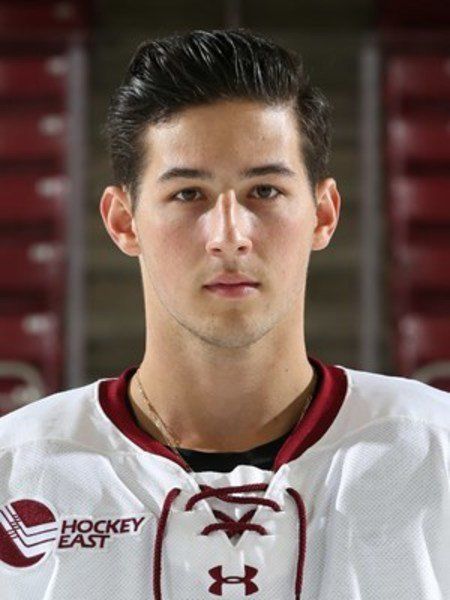 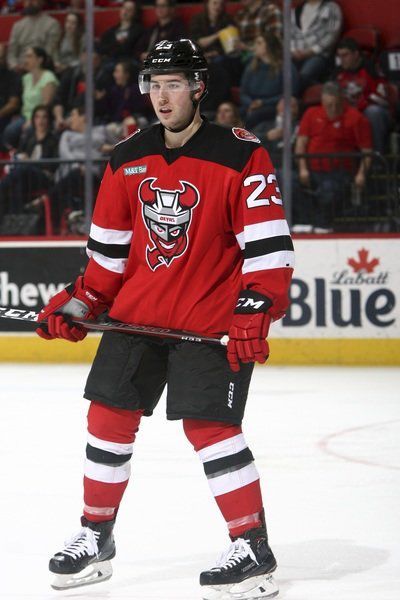 JustSports Photography/Binghamton DevilsFormer Pinkerton star J.D. Dudek played five games with the AHL's Binghamton after finishing up his career at Boston College in the winter.

JustSports Photography/Binghamton DevilsFormer Pinkerton star J.D. Dudek made his professional debut with the AHL's Binghamton Devils at the end of the 2018-19 season. He is now looking for his next job.

JustSports Photography/Binghamton DevilsFormer Pinkerton star J.D. Dudek played five games with the AHL's Binghamton after finishing up his career at Boston College in the winter.

J.D. Dudek is fighting for his next professional hockey shot.

Four months removed from making his American Hockey League debut, and just over a month since watching his former Pinkerton Academy and Boston College teammate Zach Sanford hoist the Stanley Cup, Dudek finds himself as a free agent, in search of a professional hockey home.

“I’m looking for an opportunity to prove myself in pro hockey,” said Dudek, who is from Auburn. “Right now, my mindset is all about getting better. I’m spending my time training on and off the ice. I have a chip on my shoulder, and I want the chance to play hockey.”

Dudek is coming off a 2018-19 hockey journey that began with his senior season at Boston College, scoring seven goals as a defense-first center.

The season ended with Dudek making his professional debut, a five-game stint with the Binghamton Devils, the AHL affiliate of the New Jersey Devils.

Now, the former Eagle-Tribune All-Star is back in New Hampshire and ready to do whatever is necessary to earn his next job.

Right now that means 12-plus hour training days that sometimes start in Hooksett, N.H., and end in Wilmington, Mass.

“I’m doing everything I can to make myself better and get the attention of a team,” said Dudek. “My agent is talking to AHL teams. I’ve played in the AHL, and I think I showed that I belong at that level. Now, I have to find the right fit.”

Dudek — the son of former Heisman Trophy finalist and NFL running back Joe Dudek — broke out as a star at Pinkerton Academy.

After a year in the elite United State Hockey League split, Dudek moved on to Boston College.

In four seasons at BC, Dudek took on the role of defensive forward, specializing in grinding out tough shifts. He finished his career with 24 goals and 28 assists in 149 games.

“Sure, everyone would love to be the top scorer,” said Dudek. “But I was fine with doing a little bit of everything. I played center, right wing, left wing, I played defense on the power play. I had to be versatile.

“There was some frustration. Being below .500 was tough. But this year we beat UMass Amherst, the No. 1 team in the country, and a top-10 team in Providence. We also made the Hockey East championship, and that was special. Those are memories you have forever.”

Originally drafted by New Jersey in the sixth round of the 2014 NHL draft, the Devils traded his rights during the 2017-18 season to the Edmonton Oilers, who released him during the winter.

“When I was traded I was pretty rattled because I didn’t know what it meant,” he said. “But then I was honored because Edmonton and (former Bruins GM) Peter Chiarelli asked for me. That was exciting. But then (Chiarelli) and his staff were fired.”

“Playing for the Devils was awesome,” he said. “The AHL was a great step up in the hockey world. It gave me a lot of confidence. I learned it’s about how smart you are about the game.”

Now Dudek is in search of his next team.

His training regimen includes regular work with North Andover-based Mike Buckley, the goalie coach for the Pittsburgh Penguins, to refine his shot, skills coach Peter Russo of Burlington and the St. Louis Blues and longtime pro hockey player Jeff Giuliano among others.

Most of those days begin before 9 a.m. and end close to 10 p.m. But he isn’t complaining.

“It’s hockey all the time,” said Dudek, who also plays in a local league. “I’m working hard and looking to see what team thinks I fit on their roster. I hope my five AHL games show something. I’m open to any team that is willing to give me a chance. I just want an opportunity.”

Zach Sanford, who in June won a Stanley Cup title with the St. Louis Blues, and current pro hockey free agent J.D. Dudek were a dynamic one-two punch while leading Pinkerton to the 2012 Division 1 state title.

That winter, Sanford was Eagle-Tribune MVP, leading the area in goals (36) and points (69). Dudek was an Eagle-Tribune All-Star with 20 goals and 53 points.

The two went their separate ways after that, then teamed up again at Boston College in 2015-16. They remain friends as they try to carve out pro hockey careers.

“I was so happy for Zach, seeing everything come together for him in the Stanley Cup,” said Dudek. “After all the work we put in together, from middle school to Boston College, I was so happy for him. You couldn’t draw it up better than a goal in Game 7.”

So, any idea if he will bring the Stanley Cup to New Hampshire?

“I wouldn’t be surprised,” said Dudek. “We’ve been in contact since the Final, but I’m letting him celebrate. He deserves it.”