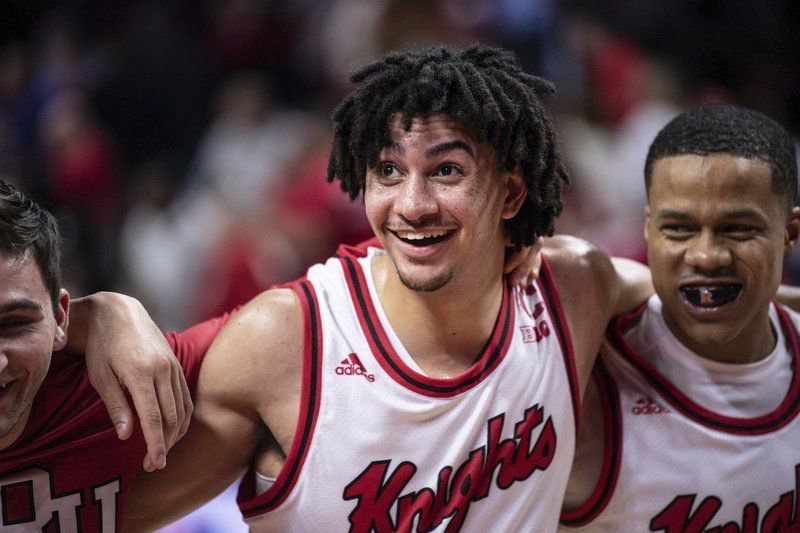 Ben Solomon/Rutgers Athletics. Rutgers captain Geo Baker of Derry, center, and the Scarlet Knights have had plenty to smile about. 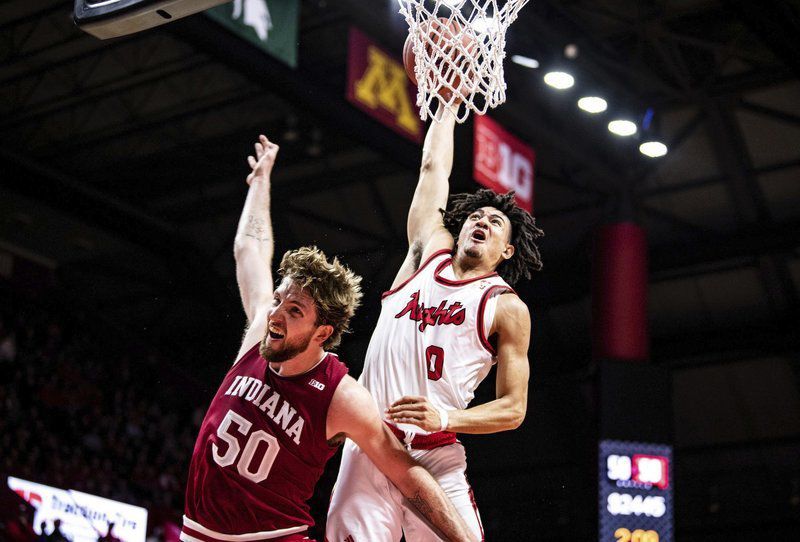 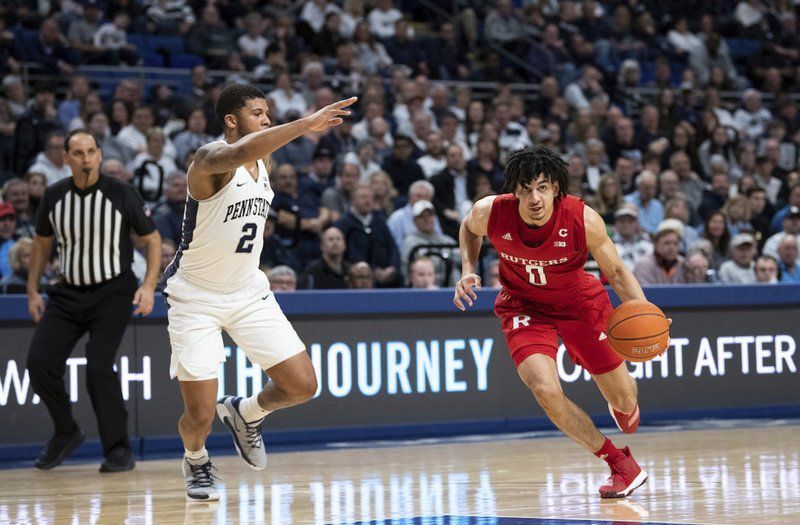 Ben Solomon/Rutgers Athletics. Just like in his days at Pinkerton, Geo Baker of Derry drives past Penn State's Myles Dread. 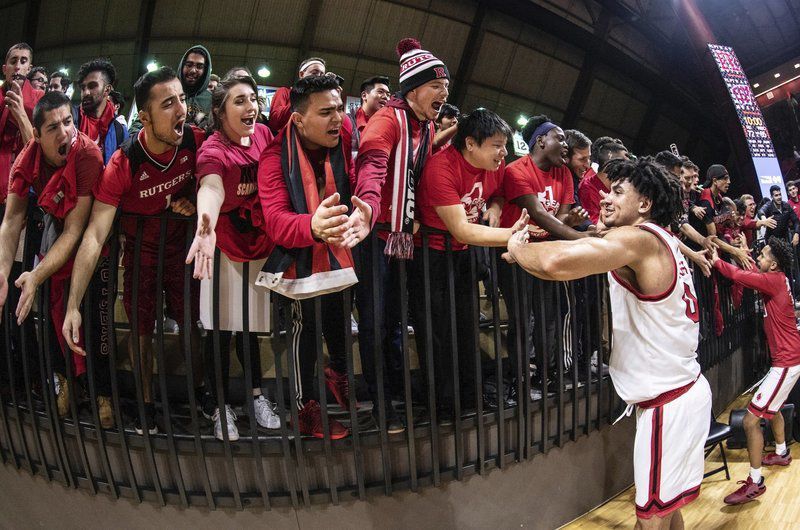 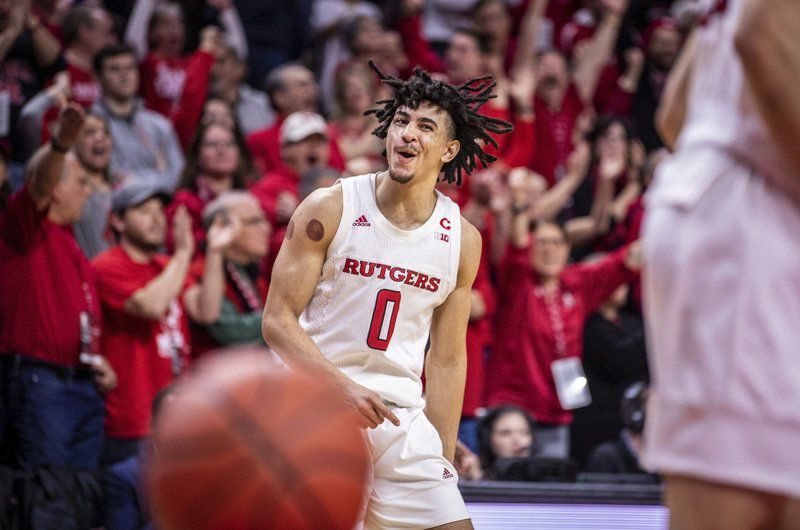 Ben Solomon/Rutgers Athletics. Rutgers captain Geo Baker of Derry, center, and the Scarlet Knights have had plenty to smile about.

Ben Solomon/Rutgers Athletics. Just like in his days at Pinkerton, Geo Baker of Derry drives past Penn State's Myles Dread.

The 6-foot-4, 185-pound point guard is the master of the buzzer-beater and one of the major reasons why, if the pandemic hadn’t hit, Rutgers likely would have been dancing in the NCAA tourney for the first time in 29 years.

But when he looks in the mirror, he still sees the waifish 5-foot-3, 16-year-old point guard craving respect.

He explained, “Coming from Derry, New Hampshire, I was the underrated kid all my life. Now I’m making history. I came to Rutgers to make history.

“The underrated New Hampshire kid, I still use it as motivation. I think about it every day. I tell younger kids from New Hampshire, they get to see anything is possible.”

He’s no longer 5-foot-3 and 100 pounds (if that). He grew more than a foot and still has that sweet handle that back in the day earned him the nickname “assist-maker Baker.”

If you have ESPN, you can watch it on a regular basis. Visit YouTube, there is plenty of evidence of the scrawny teen with the ample potential.

Although even his believers back then may not have believed “ample” would have meant even a Division 2 college scholarship.

Mom is about 5-foot-7 and dad about 5-foot-11 so his first bit of overachieving was reaching his present height.

As for the history he wanted to make ... done. In addition to the individual honors, the 2019-20 Scarlet Knights went 20-11, their first winning season in 14 years.

As he grew, the colleges took notice. He attended Buckingham Browne and Nichols (BB&N) in Cambridge, Pinkerton Academy for a year (leading the Astros to the state final) then spent a couple of years at Proctor (N.H.) Academy.

It’s all come together at Rutgers (aka The State University of New Jersey).

He was named All-Met (metropolitan New York) rookie of the year and just got better every year. In three years, he already has 1,041 career points and this winter was the first Scarlet Knight named All-Big 10 (he made third team) since the school joined the 14-team conference in the fall of 2014.

He went from overlooked to an NBA prospect. That can be a heady experience for a kid from Derry.

Baker, who has been captain since his sophomore year, admits he spent a little too much time perusing for his name in mock drafts.

“I used to look at it a lot more,” said Baker, who has been home in Derry for the last month with mom, ex-MIT basketball player Irene Baker. “Sophomore year, agents were reaching out. I let it get to me.”

He revealed he planned on declaring for the draft this year before the COVID-19 pandemic. Then he’d work out for NBA clubs and get their feedback. Some then stay in the draft while many return to college.

St. John’s University star L.J. Figueroa from Lawrence declared, but reports are he’ll return to the Red Storm for his senior year.

“Ultimately, with the coronavirus, people said there wouldn’t be any pre-draft workouts,” said the former Eagle-Tribune Super Teamer, whose full first name is Geordano. “But that was definitely the plan (to declare). The NBA isn’t going anywhere. I’ll get there when I get there.”

Do you think you’ll make the NBA?

Baker responded, “That is the goal. I envision it every day. I’m a big believer that helps you to reach it.”

It was an unforgettable albeit trying junior season. He missed three games with a broken thumb and he rushed back, playing with a cast. Last winter he averaged 10.9 points, 3.5 assists and 3.0 rebounds while shooting .399 from the floor (.282 on 3-pointers).

“I came back way too early. I couldn’t dribble with my left hand,” said Baker, who has a 3.2 GPA as a human resources management major.

But when the pressure is on, this Geo is the Rolls-Royce of Big 10 guards.

He hit a late game-winner last season against Nebraska and sophomore year against Ohio State.

In an NJ.com article on Baker, Illinois coach Brad Underwood said, “Geo Baker is the best closer in college basketball. He is a difference maker.”

In the same article, teammate Ron Harper Jr. (the son of the ex-NBA star), said, “When the pressure is on, it’s just like ‘Geo, if you got an open shot, take it.’ I’ll be there to rebound it, but I know they’re going in. ... I got the best seat in the house.”

He explained, “On Twitter and TikTok I saw a couple challenges. I got tagged on a kid mimicking my step-back game-winner (vs. Nebraska). It was just something fun for kids to do. “It blew up. It’s really cool. There were a lot of videos, hundreds and hundreds. I responded to them all. They were from New Jersey and Derry and other states.”

“One video had five kids and they all made the step-back in a row,” he said. “They all ran to the camera and they were screaming and they all had signs and hats.”