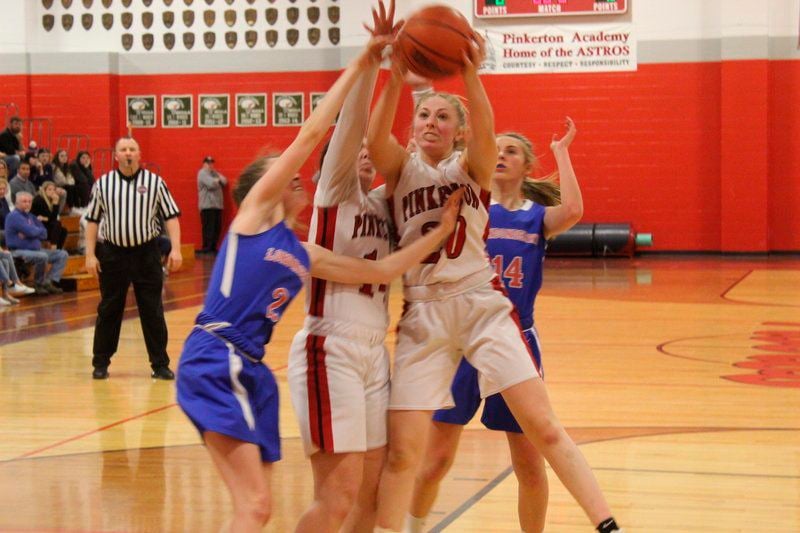 DAVID WILLIS/Staff PhotoPinkerton's Alyssa DiMauro grabs a rebound over Londonderry's Colleen Furlong and teammate Alli Ingalls during the Division 1 first round on Wednesday. 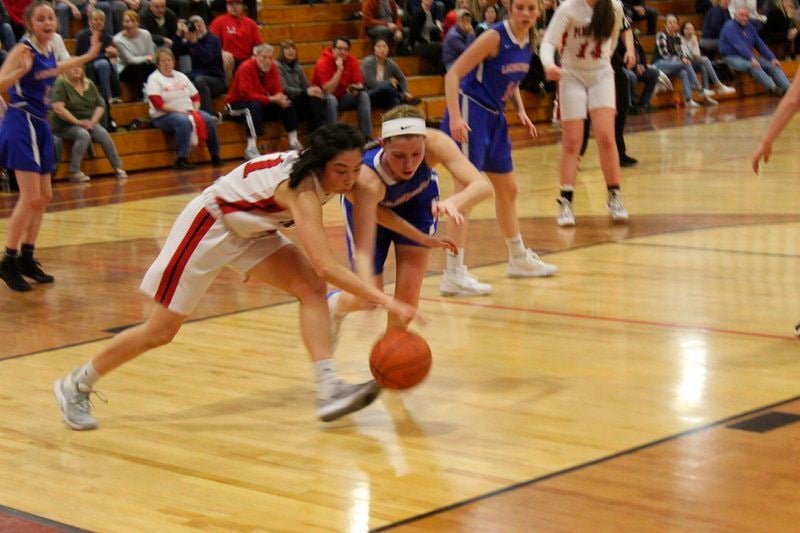 DAVID WILLIS/STAFF PHOTOPinkerton's Jesse Ames dives for a loose ball against Londonderry's Courtney Shay during the Division 1 first round on Wednesday. 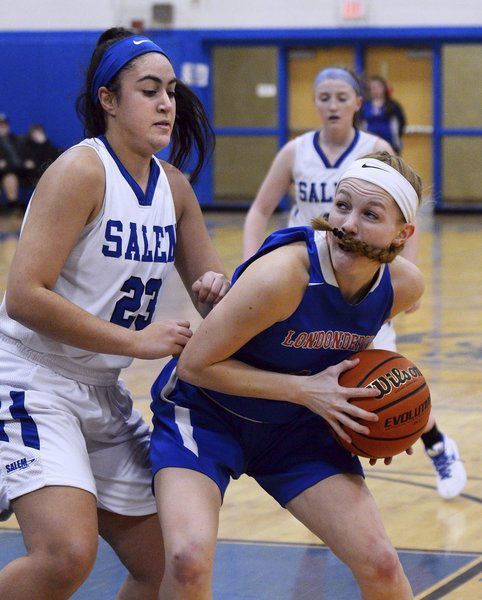 DAVID WILLIS/Staff PhotoPinkerton's Alyssa DiMauro grabs a rebound over Londonderry's Colleen Furlong and teammate Alli Ingalls during the Division 1 first round on Wednesday.

DAVID WILLIS/STAFF PHOTOPinkerton's Jesse Ames dives for a loose ball against Londonderry's Courtney Shay during the Division 1 first round on Wednesday.

Playing archrival Pinkerton in the first round of the Division 1 tournament, the Lancers scored just one basket in the fourth quarter, giving the Astros two shots at a dramatic finish.

“Pinkerton had two chances at the end that, 90% of the time, go in,” said Londonderry coach Nick Theos. “But, in tight games, sometimes they don’t fall. We weren’t crisp on defense at the beginning, so we went with a smaller lineup because I had a feeling they were going to try to go to the basket. We sacrificed some rebounding to get quicker. And when it comes to shooting free throws, we are pretty good at it.”

Of course, Londonderry is no stranger to upset wins in the playoffs. Last year, they pulled out a first-round shocker over Salem as a No. 12 seed.

Last Wednesday’s game followed a different script, but ended in the same result.

“It came down to the last shot, and the shot was there,” said Pinkerton head coach Lani Buskey. “My girls are filled with grit and determination. They never count themselves out. But Londonderry is a very good team. I’m sad for them, but I’m also so proud.”

Astro sophomore Avah Ingalls opened the fourth quarter with a bang, sticking a 3-pointer. After Londonderry (11-8) answered with its only basket of the fourth, Samantha Franks knocked down a jumper to make it 41-38.

The Lancers’ aggressive defense, however, then began to take control, and Pinkerton was held without a point for over six minutes.

“They were playing really good defense, but we were also struggling to finish,” said Buskey. “That’s been a problem all season. Credit Londonderry for sure, but we fell into the bad habit of looking for someone else to score. We were passing too much, and then we took the wrong shots.”

Londonderry was then able to grab the lead thanks to the free-throw shooting of Ashley Rourke (3 for 4 in the fourth quarter) and Courtney Shay (5 for 7 in the fourth).

But Pinkerton was not done.

Sophia Riccio attacked the basket and scooped in a layup with 0:44 left to cut the lead to just 44-43. Captain Jesse Ames then grabbed a huge rebound off a Lancer miss to set up a go-ahead chance. But the Astros could not find another hoop.

“It hurts to look at the score, but I can look back at this entire season and be nothing but proud,” said Buskey.

Rourke finished with a game-high 15 points for Londonderry, followed by 10 from Shay and 9 each from Colleen Furlong and Katherine Marshall.

MERRIMACK — One playoff upset wasn’t enough for the Londonderry girls.

After taking out archrival Pinkerton in the first round, the No. 10 Lancers went into second-seeded Merrimack Saturday night and came out with a shocking 49-37 win. During the regular season, the Lancers only lost to Merrimack (16-3) by seven.

Ashley Rourke and Colleen Furlong each scored 14 points for Londonderry (12-8), which led 12-4 after one and cruised from there, leading 24-10 at halftime and 36-22 after three quarters.

Katie Sullivan and Ashley Schmitt scored six each, and Courtney Shay was held to an uncharacteristic five points.

The Lancers now play No. 6 Goffstown in the semifinals on Thursday at Exeter High School (6 p.m.). Goffstown won the regular-season matchup between the two teams 58-25, but it was just the second game of the season.