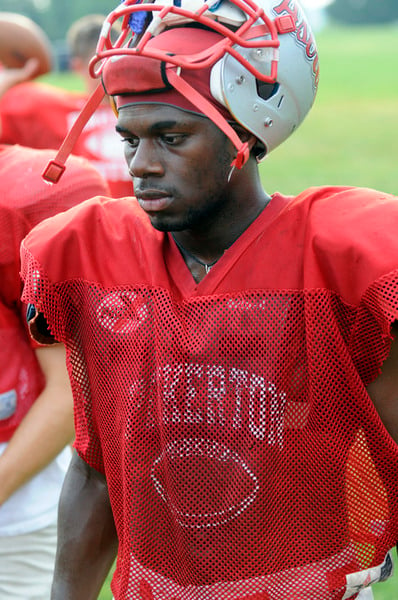 Pinkerton star Manny Latimore is all business when it comes to football, his first love since his father introduced him to the sport as a youngster. 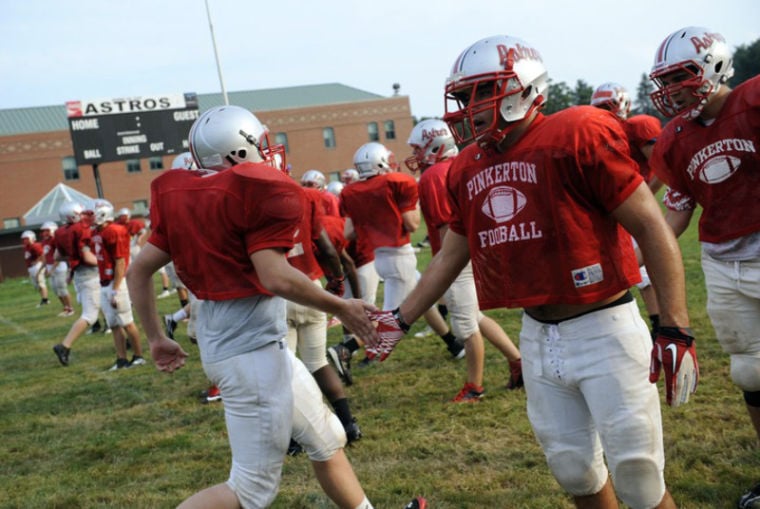 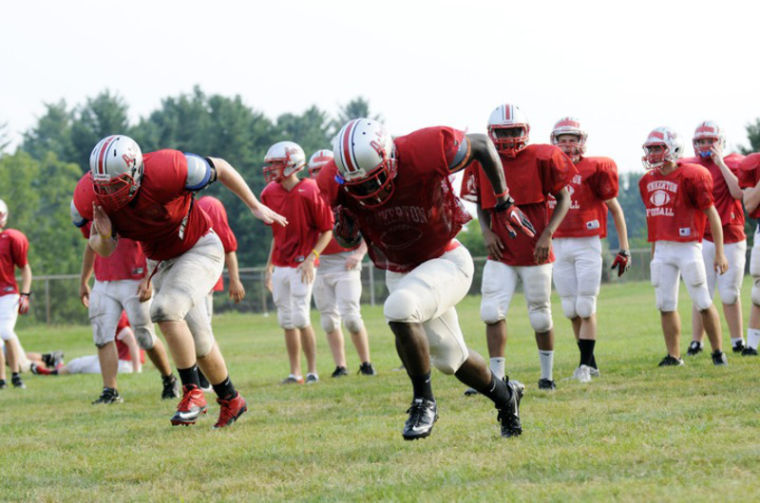 Pinkerton star Manny Latimore is all business when it comes to football, his first love since his father introduced him to the sport as a youngster.

DERRY — It should have been a day for giving thanks. In fact, it was the day for being thankful — Thanksgiving Day 2009.

And 14-year-old Manny Latimore had plenty to be thankful for that day.

Latimore, his mother Adine and sister Nichell were spending the holiday in Florida, where the dynamic halfback had led his Derry Wolverines to the Youth Football Nationals, the crowning achievement of his already memorable young football career.

The family had just sat down for Thanksgiving dinner, and the giddy Latimore — nine days removed from celebrating his birthday — was already dreaming of his matchup with a team from Nebraska the following day.

Then the phone rang with the call that is every child’s worst nightmare.

Phillip Latimore, Manny’s father, had suffered a heart attack while driving home from Thanksgiving dinner with Manny’s other sister and nephew. His car veered off the road and struck a tree.

“It was just a shock,” said Manny. “It brought so many thoughts rushing to my head. It was the first big loss I experienced in my life. I really didn’t know how to react.”

Now three months shy of his 18th birthday, Latimore is 5 feet 10 inches tall and 190 pounds with jet-quick speed. His shoulders are wide enough to carry Pinkerton Academy to a state title, and his legs evoke memories of NFL legend Earl Campbell. They are the source of his immense power as a runner, which is often overlooked due to his quickness.

In short, Latimore is the player every opponent in New Hampshire dreads. He torched the state for 1,504 yards and 29 touchdowns last season.

“I honestly believe Manny is, at least talent-wise, as great a back as I have ever coached,” said Brian O’Reilly, who is entering his 36th year as head coach.

That’s quite a compliment from the man who has probably coached more great backs than any coach in area history or New Hampshire history.

“Manny has everything that Division 1 college football programs are looking for,” O’Reilly said.

The football field is where Latimore is most at home. It is his sanctuary. It is where, since he first strapped up a helmet as a youngster, he has befuddled defenders and wowed fans.

It is also where Manny feels the greatest connection to the father he lost. Where he feels that link to his idol who introduced him to the game so long ago.

“I always think about him,” said Manny. “During games I talk to myself as if I was talking to him. When I am struggling I will say, ‘Help me out on this play, Dad. Get me through this.’”

Standing on the sidelines every day in those younger years was Phil, guiding his son through the rough world of football.

“The two of them definitely did it together,” Adine said.

If he repeated those numbers this fall he’d finish with 3,976 rushing yards and 72 TDs. That would place him 10th in rushing and fifth in scoring in the modern area all-time leaders.

It may require a year of prep school or time in junior college to lift his grades, but with numbers like those, Latimore is certainly on the radar of all the New England 1-AA colleges.

While his father may not be there to cheer him on, the Latimore family is still a major presence from the stands.

Latimore now plans to run and give his family plenty to cheer for this fall, and hopefully into his college career.

“I love to run the football,” he said. “I love the emotion of football. I love playing for this team and the will to win. I may not be as fast as some people think, but I think I am quicker. I am big, but I want to get bigger. Coach O’Reilly thinks I can play Division 1 college football and I would love to. I am willing to do anything it takes to do that.

“I wish my dad was here to watch me, but I know he is looking down on me and he is proud.”