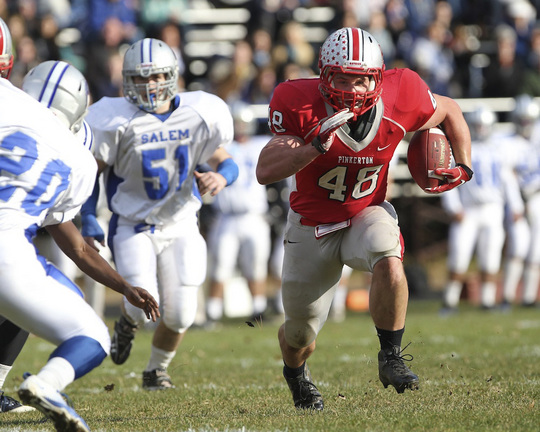 Astro running back Kevin Davies (48) rushed for more than 100 yards and had four touchdowns in Pinkerton’s semifinal win over Salem Nov. 12. 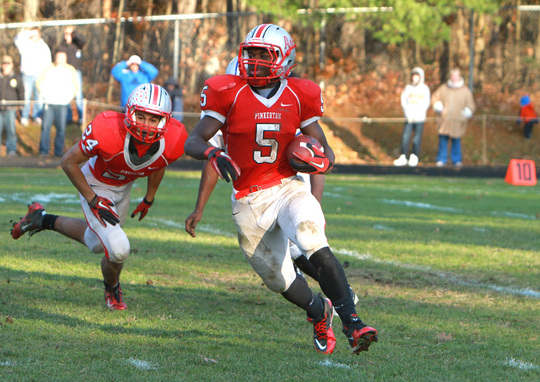 Pinkerton running back Manny Latimore (5) starts downfield for a 76-yard run in the third quarter. 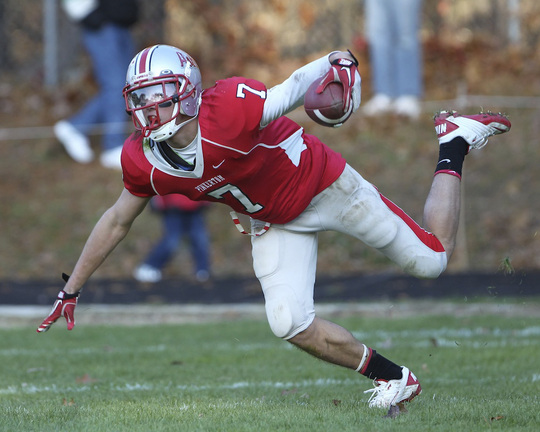 Astro running back Kevin Davies (48) rushed for more than 100 yards and had four touchdowns in Pinkerton’s semifinal win over Salem Nov. 12.

Pinkerton running back Manny Latimore (5) starts downfield for a 76-yard run in the third quarter.

DERRY — For a fraction of a second, the football began to slip out of Ryan Coombs' outstretched arms Saturday.

But it was comfortably tucked away before the diving Coombs hit the ground and was mobbed by teammates.

"Words can't describe this," Coombs said. "There is nothing better than fighting our way back into the championship game. Nothing compares."

That catch capped a furious comeback that saw Pinkerton turn a six-point deficit into an 11-point lead in just 1:32 early in the fourth. The Astros punched their ticket to the title game with a 38-20 victory over the Salem Blue Devils in the New Hampshire Division 1 semifinals Saturday afternoon.

"We're headed back to the finals to defend our championship," fullback Kevin Davies said. "This is right where we should be."

The Astros will look to repeat as Division 1 champs when they host No. 2 Exeter in the title game on Saturday at noon. The Blue Hawks beat Nashua South last Saturday.

It's incredible to be going back two years in a row," defensive back Andrew Curran said. "For my last football game ever, there isn't a better way to end."

"We could feel the momentum going their way," Davies said. "I just looked at the guys and told them, 'We have to get the game back on our side.' And Manny (Latimore) went out and took the wind out of their sails."

On Pinkerton's first play following the score, speedy sophomore Latimore ran a sweep left and broke free for a 76-yard touchdown. Then, on the ensuing kickoff, Alex Pachocha blasted the returner and Curran pounced on the ball.

"I saw the ball squirt out and I heard someone yell 'Ball,'" said Curran. "I couldn't tell if the returner was down, but I figured I'd better jump on it."

Two plays later, Chris St. Onge lofted a ball into the end zone that Coombs hauled in with a lunging catch for the score.

"We really worked on our passing game all week," Coombs said. "I bobbled it at first, but secured it as I was going down. That really shifted the game. We just said, 'Lets finish it here and get to the finals.'"

Davies was his dominant self, carrying 14 times for 151 yards and three touchdowns, including a 58-yard score in which he ran over three defenders. Latimore added 109 yards on just five carries.

Davies led Pinkerton with 11 tackles, while Matt St. Onge added seven stops and Matt Madden and Curran each had five tackles. St. Onge and Brett Stuart each chipped in with interceptions.

The Astros will now look for their second straight state title, against an Exeter team they beat, 42-16, in the regular season. Pinkerton won three straight titles from 2006 to 2008.

"We're in the championship," coach Brian O'Reilly said. "That is where we were expected to be. Now we have to defend our title."