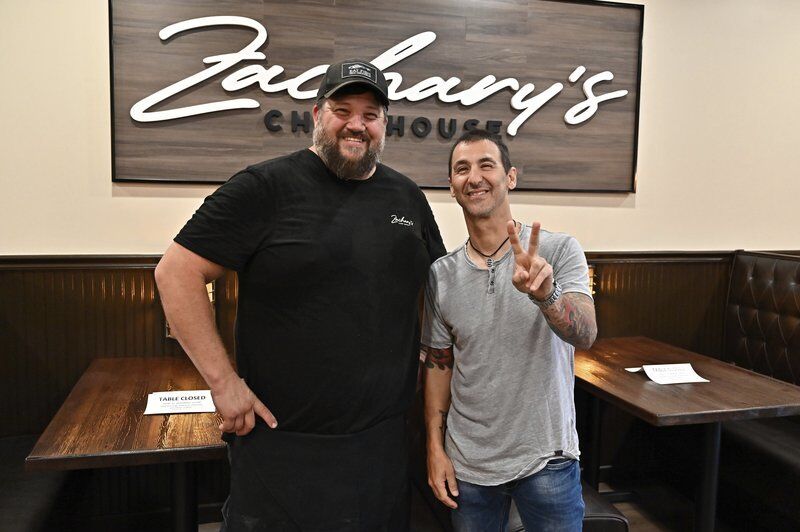 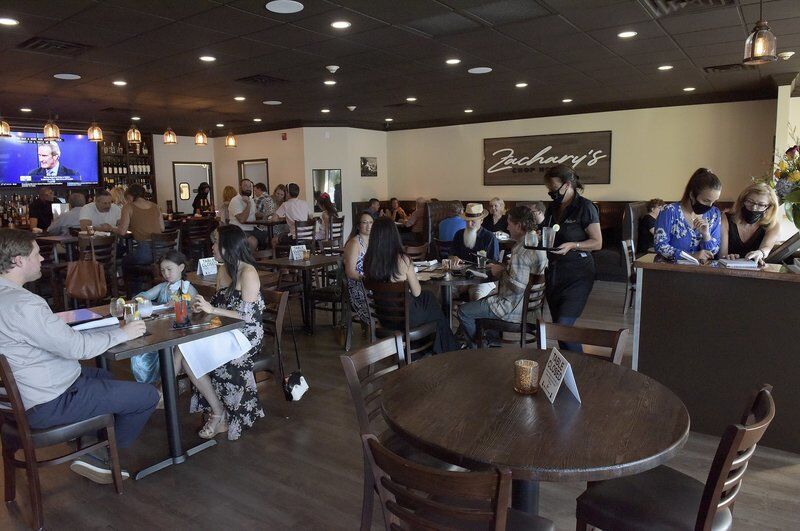 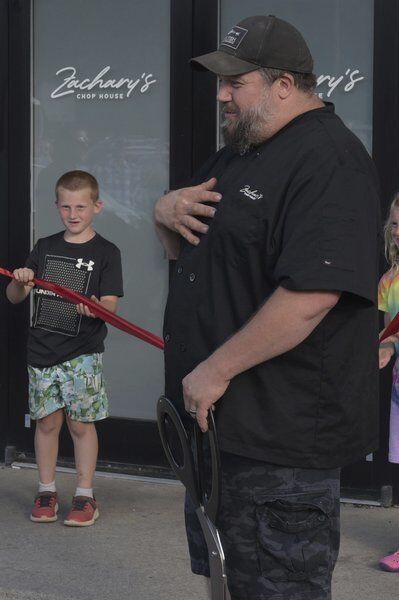 TIM JEAN/Staff photoRestaurant owner Zachary Woodard gets choked up as he speaks before cutting the ribbon to open Zachary's Chop House in Windham. The new restaurant was the former Lobster Tail.

TIM JEAN/Staff photoRestaurant owner Zachary Woodard gets choked up as he speaks before cutting the ribbon to open Zachary's Chop House in Windham. The new restaurant was the former Lobster Tail.

WINDHAM — It’s a dream come true, with a new name and new future for this longstanding Windham icon.

For restaurant owner Zachary Woodard, it’s also a new chapter in his life and in the life of his restaurant, thanks to a good friend and a common vision to succeed.

The Lobster Tail on Cobbetts Pond Road unveiled a new name last Friday night, now called Zachary’s Chop House. Surrounded by community supporters, including friend Salvatore “Sully” Erna, Woodard said his new restaurant is an updated chapter in his life as a chef and business owner as he hopes to bring a new tradition to Windham.

And the connection to Erna, a Lawrence native and the frontman of the rock band Godsmack, helped make this dream come true, Woodard said. He added that it’s the strong friendship with Erna that helped him make the leap of faith to change and adapt to the most recent challenging times.

Woodard has been in the restaurant industry for 20 years. In addition to working as a cook/kitchen manager for Weathervane Seafood, Woodard was a commercial fisherman just prior to starting work at Lobster Tail 17 years ago and eventually buying the business in 2016.

“It’s mine, and my dream and not somebody else’s,” Woodward said at Friday night’s grand opening.

It was a project made up of a lot of heart and hard work.

Enter rock band Godsmack and its founder and frontman Erna, a fan of the Lobster Tail and its menu for years and fast becoming a friend to Woodard and his passion and commitment to providing great meals in a community-oriented environment.

The bond between Erna and Woodard started the journey that eventually culminated in the Lobster Tail transformation.

The last few years were a struggle, Woodward said, even before COVID-19 set in.

“We weren’t allowed to do anything, we had to lay off everybody off, we hired a few back but things were still a struggle,” Woodard said.

For Erna, the Lobster Tail was a frequent destination.

He was not only a customer, but became a friend to Woodard.

“We would come here, we found Zack to be a really good chef, the quality of food we liked,” Erna said. “We try to eat healthy, we kept coming back and became constant customers.”

Erna said the friendship grew, and the pair talked often about the business, the struggles and how Lobster Tail might morph into something a bit more upscale that could appeal to many in the region.

Erna decided to help his friend with a new restaurant look, a renovation, and ways to create a vision of what the former Lobster Tail could be.

That included a new name.

The conversation started about what could be done.

“We had an opportunity to open the place up, I to connect Zack with people I knew in construction, electrical, etc., that could provide a whole new look for the restaurant,” Erna said. “We assembled the team, told them our needs, we wanted it to be a feel good project.”

Erna added he wanted to jump on board to give Woodard something to be proud of, something that would grow, a new option, with a vision for the future.

“I think it’s worth it, it’s a beautiful place. I know they will do well,” Erna said. “I believe in this family. Now I know they have something so special.”

As for making the decision to change the name, Woodard said it was a big step to alter a longtime community staple in Windham where he worked for so many years.

“It was one of the biggest steps of my life,” he said. “But you build your confidence, it’s a new life, giving back to the community again”

Having Erna as a supporter and friend, Woodard said that was also a big boost of confidence.

“It makes you know what a friend really is,” Woodard said. “It means a lot to have (people) believe in you.”

Erna, who helped unveil the new name on Friday night, said he wanted to offer Woodard his support and all the things he’s learned by traveling the world with Godsmack, what successes he’s had, and what could be done right here at home in Windham to support those successes and hopes for the future.

He added that, just like in Godsmack, fans have grown older, fans are now parents of kids learning to love the music. He wanted Woodard to take that longtime tradition of Lobster Tail and introduce it to a new generation of fans.

It was a feel good project in a time that may not always feel good, Erna said.

“I wanted to make sure what was possible, to (give) Zack a brand new start,” Erna said, “to inspire others to step up. That for me was the hope. I wanted to see other people going ‘OK, it’s important to save a business like this.’”

And for Woodard, as he welcomed his guests Friday night into his new and improved space, it was an opportunity to share community, friendship and a lot of good food.

“For what Sully did for us, we need more people like Sully,” Woodard said. “It gets your confidence up, it means a lot to have someone believe in you. It’s good to have people like that in your life.”