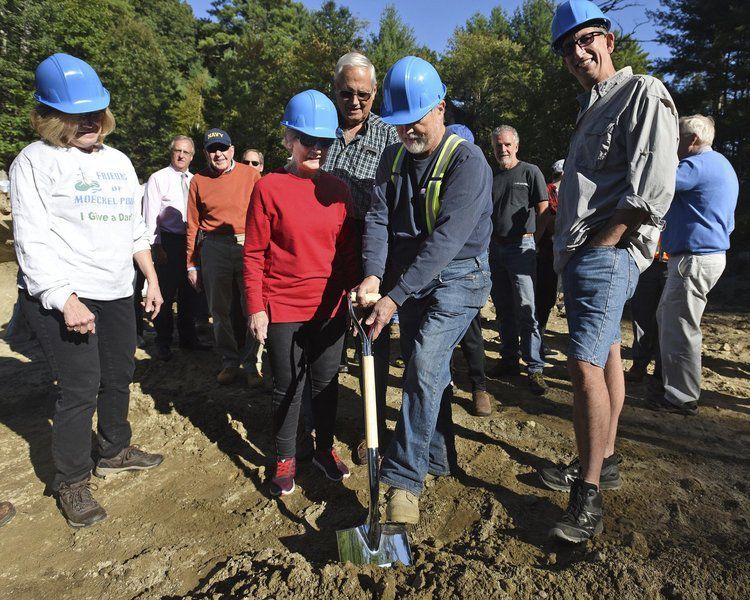 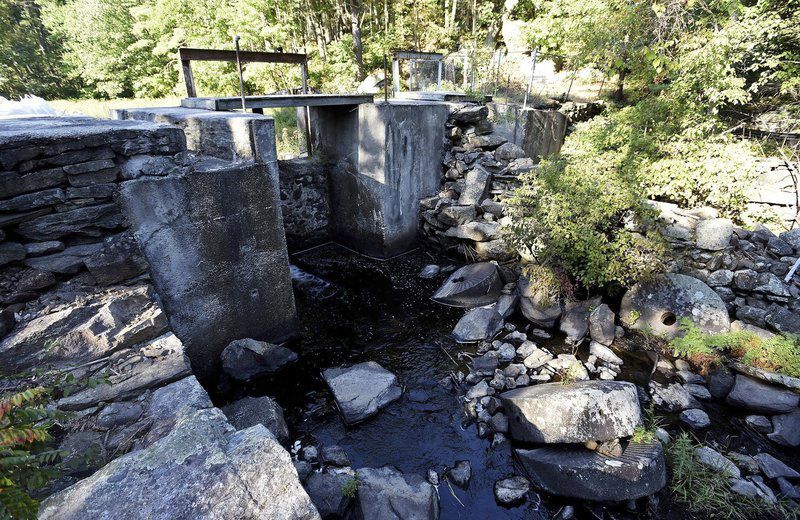 RYAN HUTTON/ Staff photoThe old mill stones from the Simpson Mill on Moeckel Pond will be hauled out to serve as decorative pieces for the new Marston-Finn Conservation Dam being built on the site of the existing, decommissioned Moeckel Dam in Windham.

RYAN HUTTON/ Staff photoThe old mill stones from the Simpson Mill on Moeckel Pond will be hauled out to serve as decorative pieces for the new Marston-Finn Conservation Dam being built on the site of the existing, decommissioned Moeckel Dam in Windham.

WINDHAM — The water still trickles in a narrow stream through what’s left of an historic dam.

But more water and wildlife will return, and that’s good news for all who love and support Moeckel Pond and its surrounding landscape.

Community members, town officials, and other supporters of the pond gathered recently  for an official ground-breaking ceremony to officially start the construction of the new Marston-Finn Conservation Dam off Moeckel Road.

The dam will be named to honor the James Finn and Elizabeth Marston who donated $120,000 to help restore the dam.

It’s been nearly a decade in the making to get to this point, according to Dianna Fallon, head of the Friends of Moeckel Pond, a core group of five who took on the project with the help of many in town to bring the dam and its waters back to a thriving state.

Moeckel Pond and its dam have a rich history in Windham.

The 40-acre pond and its shores were once thriving spots for people to enjoy, not only for spotting wildlife like muskrat and bear, but to view hawks and other wild fowl that would flutter in and out of the wooded outskirts around the waters. It was also a popular recreational area for kayaking, fishing or spending summers with family.

“It’s pretty bucolic,” said Fallon, who has lived in the area for years.

The historic dam and its once water-powered mill wheel was an economic center for the town, operating until the late 1880s.

But through the generations, things changed, families changed, and the Moeckel Pond legacy was changing.

In 2002, the state’s Department of Environmental Services issued a letter of deficiency to the property owners, saying the dam did not meet the state’s standards and, if it failed, it could affect properties downstream.

“We didn’t want to lose this resource for the town,” Fallon said.

The state eventually ordered the dam to be breached in 2010 and the pond water drained. The dam was classified by the state as a low-hazard dam, meaning it didn’t pass the 50-year storm test.

People in town started rallying to try and find ways to save the dam and the pond. The Friends of Moeckel Pond got its start and the town’s conservation officials got involved.

The mission to save the pond continued.

Fundraising efforts got a swift start. The privately-owned pond property was eventually donated to the Friends of Moeckel Pond, and eventually sold to the Conservation Commission for $150,000.

Groups in town got involved to help raise more money including the nonprofit Windham Endowment for Community Advancement that made Moeckel Pond and its dam a major focus.

The town also established the creation of a Moeckel Pond Village District, an organization made up of local homeowners to help take over responsibility of the dam once the work is complete.

Several massive old mill stones from the dam’s original mill still lie silent in puddles of remaining water. Fallon said they will be pulled out and used somehow to honor the history of the dam and its future.

James Weber, a dam safety engineer with the state’s Department of Environmental Services, said the state is working closely with all parties in Windham as dam work continues.

“It’s a great success story,” he said. “They looked for solutions in a different situation and they made it work.”

Weber said many dams around the state are historic, aging, failing and owned privately. Often there are instances where communities band together to work on a dam project. Other times, it’s too expensive to move forward.

“This is the most successful,” he said.

Once the dam is complete, the pond waters should return quickly.

For Finn, being able to support the dam project was a way to help retain some of Windham’s past and its natural areas.

“We lose a lot of nature areas over time,” Finn said. “I didn’t want to see this lost.”

Sorry, there are no recent results for popular articles.