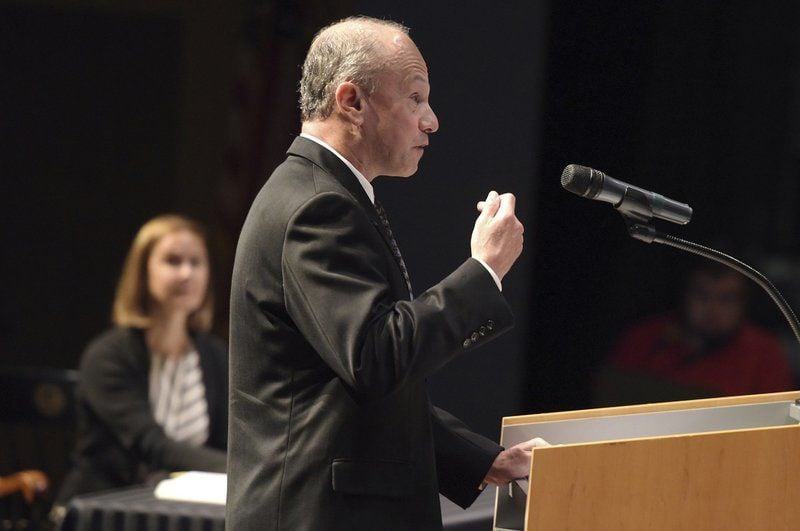 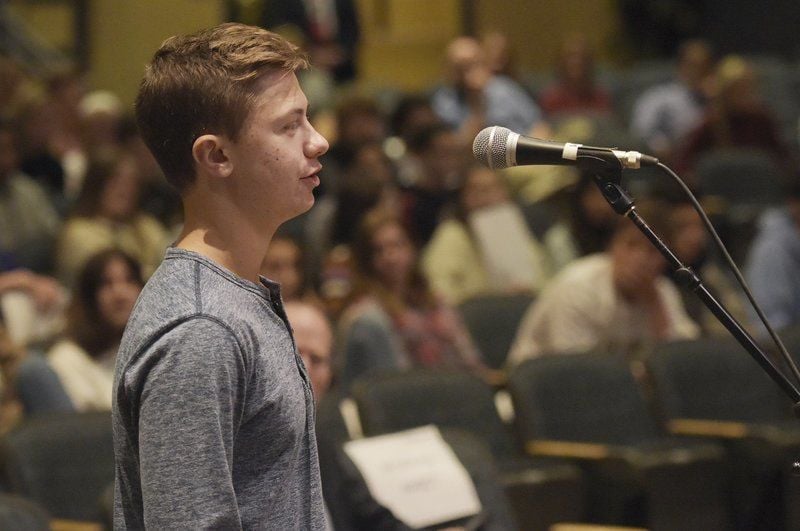 TIM JEAN/Staff photoNick Barbara, a junior at Windham High School, asks a question to members of New Hampshire Supreme Court during the court's "On the Road" series Oct. 16. 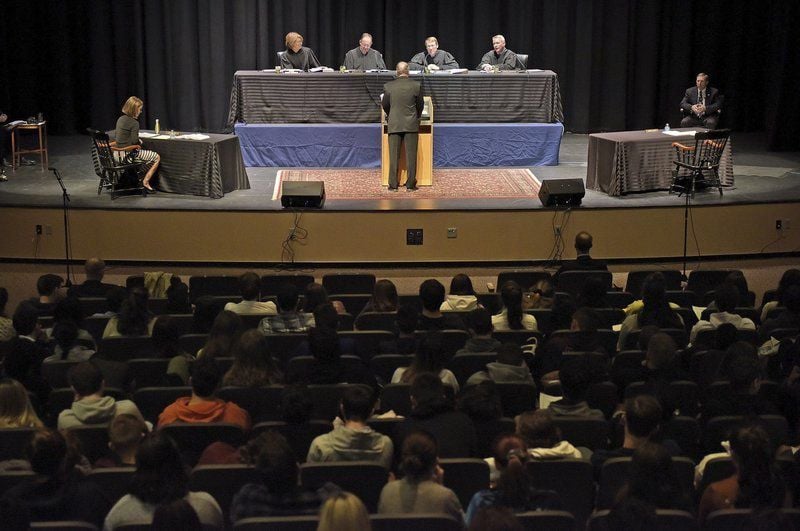 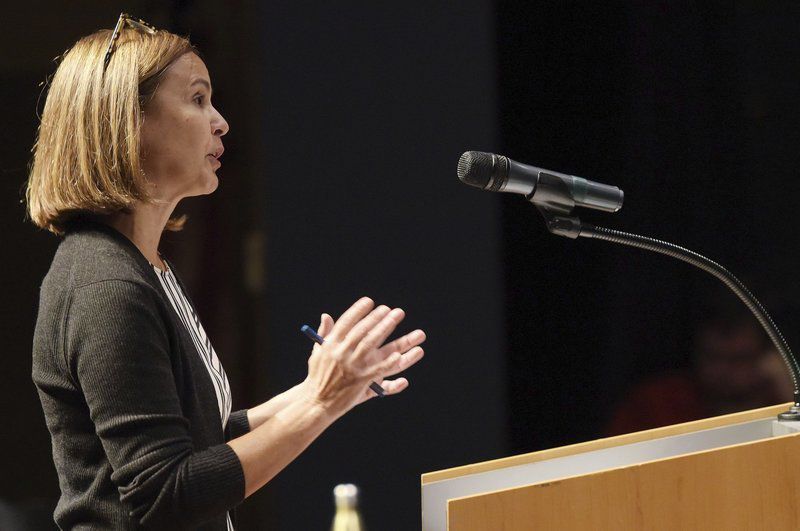 TIM JEAN/Staff photoNick Barbara, a junior at Windham High School, asks a question to members of New Hampshire Supreme Court during the court's "On the Road" series Oct. 16.

WINDHAM — One Windham High student asked lawyers visiting the school recently if it was legal to wear a sword on their belt buckle.

Both attorneys agreed it would be illegal if someone was a convicted felon, and that it could be against school rules, but didn’t know the exact law that prohibited a sword worn as an accessory.

“All the criminal laws are in this book if you want to borrow it later,” Assistant Attorney General Lisa Wolford quipped, holding a large black book.

She and defense attorney David Rothstein were at the school to argue points in the case of the State v. Christina Hill. Windham High’s auditorium was turned into a courtroom on Oct. 16 for the state Supreme Court’s “On the Road” series, which brings lawyers and justices into schools for a court session.

As part of the experience, students were able to question the lawyers and judges involved in the case about the proceeding as well more general questions about their jobs.

Nick Barbaro, a junior at Windham High, said it was a very interesting opportunity to see what happens in courts.

“It was cool to learn about and understand what was happening, because this is important,” Barbaro said.

Barbaro asked the lawyers about their path to finding their careers.

Rothstein said that his journey was more traditional, entering law school directly after graduating college. Wolford explained her path wasn’t so linear, taking a detour after getting her political science degree to work in fashion photography before attending law school.

However, a law degree is required for being an attorney in New Hampshire. The justices made a pitch for University of New Hampshire’s law school, where many of the court’s clerks come from, they said.

Another high school student asked the justices if they thought about their cases’ impact when making decisions.

“Every time, every case,” Senior Associate Justice Gary Hicks said. “There’s no such thing as an unimportant case, at least to the litigants involved.... We are always mindful of what the impact of our decision could be.”

Christina Hill is a woman who could not afford to pay the $25,000 bail set by a judge after being charged with drug crimes, according to court documents.

Her lawyer, Rothstein, argued that the bail amount violated state law, which requires judges to assess the finances of a defendant before setting bail. It’s designed to ensure someone who has not been convicted of a crime isn’t jailed simply because they can’t make bail.

Rothstein argued that because his client was not dangerous the court should not have set the bail so high that she could not afford it.

“It’s funny you hit on that — to a historic predilection of courts to set equivalent bails without looking at the financial circumstances. That was an effort in days gone by for parity, or equity if you will, for defendants,” Associate Justice Anna Barbara Hantz Marconi said.

“What’s been recognized is that is a different type of inequity,” Rothstein said.

Wolford argued that the court had not violated any laws, but set bail high enough to ensure Hill attended her trial.

Wolford explained that Hill had previously left New Hampshire when released on bail, which suggested she was a flight risk.

Since Hill filed her case, the state Legislature has amended the bail law. The Supreme Court justices asked if the amendments settled the dispute in this particular case.

“The amendments don’t affect your decisions in this case,” Wolford said, explaining that the argument about setting an affordable bail for someone deemed a flight risk is still in dispute.

The justices issued no decision on the case at the high school.