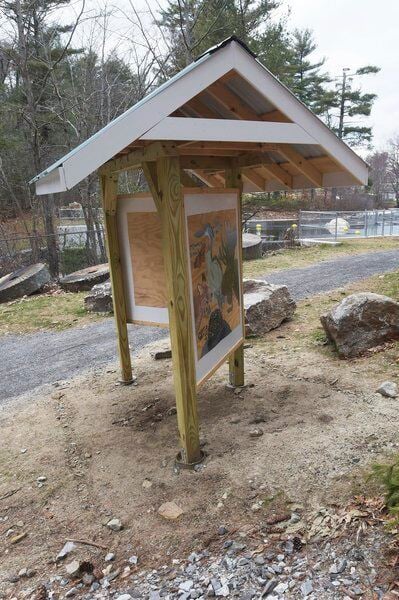 TIM JEAN/Staff photoA new information kiosk is being built near the parking area of the new Marston-Finn Conservation Dam built on the site of the former decommissioned Moeckel Pond dam in Windham. 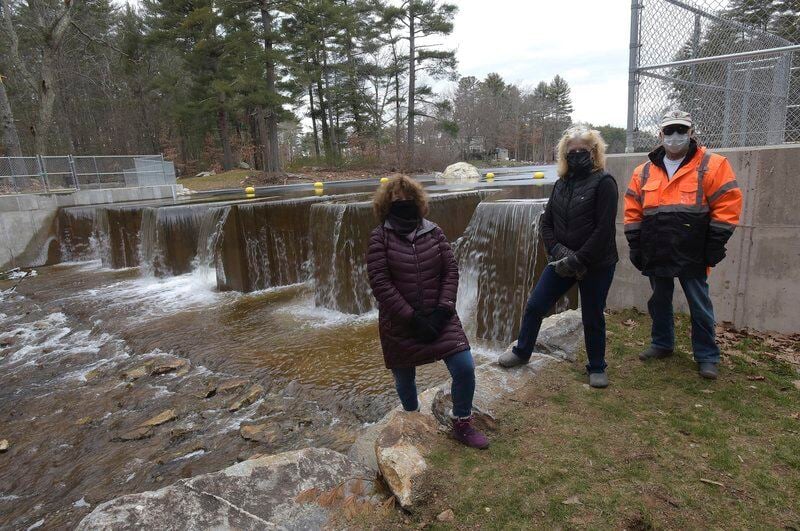 TIM JEAN/Staff photoA new information kiosk is being built near the parking area of the new Marston-Finn Conservation Dam built on the site of the former decommissioned Moeckel Pond dam in Windham.

WINDHAM — The waters are flowing and the wildlife is returning to Moeckel Pond.

And thanks to the newly constructed Marston-Finn Conservation Dam at the pond, the water is being managed, a testament to a community effort that helped bring the pond back to life.

The dam is named in honor of local supporters James Finn and Elizabeth Marston. And with recent warming trends and sunny skies, many are heading out to the pond to enjoy what nature offers.

"I love the noise it makes," said Dianna Fallon, a member of the Friends of Moeckel Pond, a nonprofit group of supporters working for years to make this dam and the waters surrounding it spring back to life.

Fallon and others gathered at the dam site on a chilly afternoon earlier this year, watching the water splash and spill over the concrete structure and forming foamy waves below.

Once the dam was rebuilt, the pond waters came back quickly, Fallon said. People jumped in their kayaks and canoes and began enjoying the waters again.

That included Fallon, who went out kayaking one day and yelled a "thank you" to all who might hear nearby, thanking the community, businesses and supporters for their hard work on the new dam and the pond.

"We got it done," said fellow Friends of Moeckel Pond member Norm Young.

Young said the project was a labor of love that drew on community affection for the pond area and the opportunity to preserve a part of what is Windham's rich traditions and history.

The pond and dam have a long history.

The 40-acre pond and its surrounding shores were once a thriving recreational draw in the area, attracting people who love to observe the resident birds and other fowl fluttering in and out of the water.

In its earlier day, the pond was known as Simpson's Pond, a tribute to the original dam owners.

The dam dated back to 1778, with its water-powered mill wheel that was a strong economic engine for lumber and grain efforts.

The property changed hands through the years, with William and Gertrude Moeckel eventually lending their name to the pond.

The pond and dam property eventually came under the watchful eye of the Friends of Moeckel Pond with a charge to help keep the spot in its natural state and for the public to enjoy.

But the dam failed.

In 2002, the state issued a letter of deficiency. The dam was officially breached in 2010 and the pond waters were drained.

Supporters jumped in to help save the dam and bring the property back to life. Fundraising was a priority.

The coalition of supporters included Friends of Moeckel Pond, the Conservation Commission, and Windham's heritage and history organizations. Organizations like the Windham Endowment for Community Advancement offered financial support, making the pond and dam a primary focus.

Today the waters are rushing again and people are out and about enjoying the warming temperatures of the season.

Diane Carpenter, president of the Windham Endowment group said the dam project truly shows a community effort to preserve the past while working toward the future.

"There's no better example of a project that is for the greater good," Carpenter said.

The dam project and pond also brought out many other shows of support, including both Boy Scouts and Girls Scouts putting projects in place. Old millstones may be used in a stone wall project. A kiosk will show the wildlife living nearby and other information.

"The dam is really the beginning," Carpenter said.

Fallon said the pond and dam bring back memories while sparking a strong sense of what is to come.

"You see people enjoying it," she said, "and you know you did the right thing."