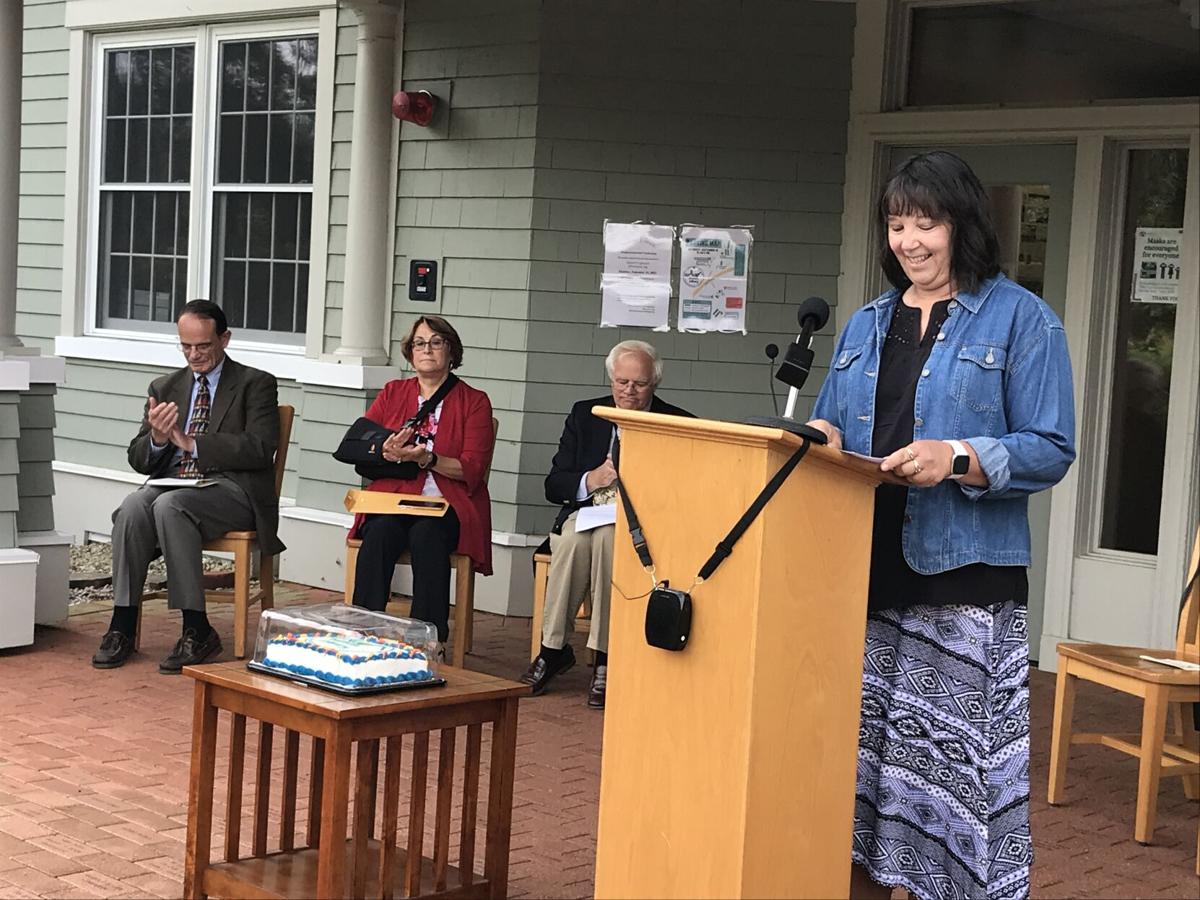 Windham’s Nesmith Library turns 150 years old and library officials and supporters gathered Sept. 18 for a day of history, tours and library activities. At right, Karen Moltenbrey, chair of the library’s board of trustees, welcomes guests at a ceremony held to kick off the day’s celebration. 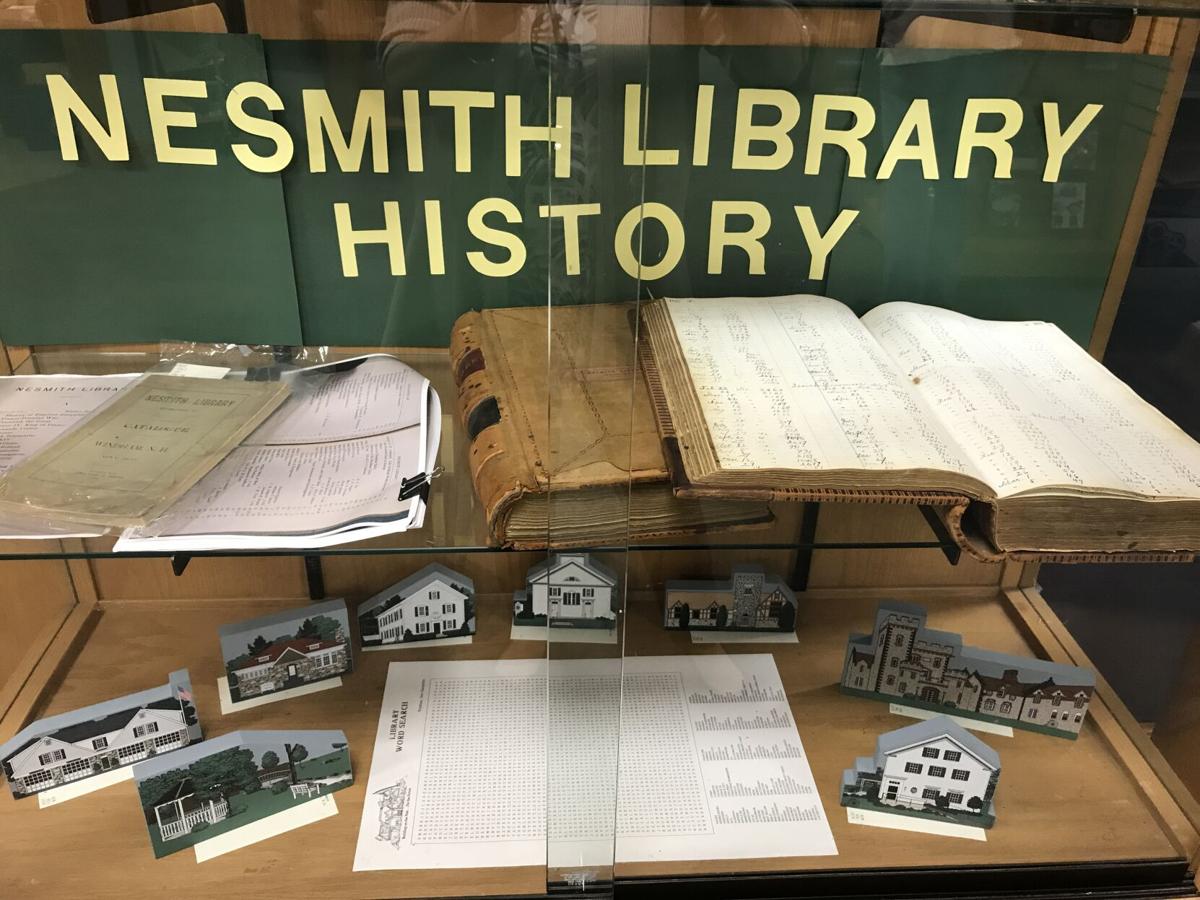 Windham’s Nesmith Library honored its 150th birthday Sept. 18 with a day of history, tours, a scavenger hunt, and library activities.

Windham’s Nesmith Library turns 150 years old and library officials and supporters gathered Sept. 18 for a day of history, tours and library activities. At right, Karen Moltenbrey, chair of the library’s board of trustees, welcomes guests at a ceremony held to kick off the day’s celebration.

Windham’s Nesmith Library honored its 150th birthday Sept. 18 with a day of history, tours, a scavenger hunt, and library activities.

WINDHAM — It was a big day for those who love the local library and history.

Windham’s Nesmith Library honored its 150th Sesquicentennial birthday Sept. 18 with a day of celebration including tours, history, library activities, music and many sentiments from library supporters honoring the milestone.

The library’s rich history in the community dates back to a time when an early subscription library was housed at the local Presbyterian Church.

In 1871, Col. Thomas Nesmith left a donation of $3,000 in his will to help found a permanent public library in Windham.

A formal opening of the new library space, in an upper room of the Town Hall building, was in June of 1871. Clarissa Hills was the town’s first librarian.

Years later, a new library building was constructed to house the library. That building is the Armstrong Building, now housing the town’s historical artifacts and displays.

The library continued on through the years, with a group of supporters known as the Friends of the Library of Windham, or FLOW, getting its start in 1966.

The current library space on Fellows Road was built in 1997 and officially dedicated the following year.

Library board of trustees chairman Karen Moltenbrey said current staff had fund delving into the library’s history and creating historical displays inside the building on Fellows Road for patrons to enjoy during the recent celebration.

She added since those early years and through generations of growth in many ways, the library continues to be so much more than a building full of books.

“It’s a place for community,” Moltenbrey said. “It’s all things live, virtual or hybrid. It’s grown in leaps and bounds over the years.”

New Hampshire State Librarian Michael York spoke at the opening ceremony and said Col. Nesmith’s generous donation of $3,000 to the town for library books was a great way to honor a mission to serve the community.

“Windham was a library leader in the 19th century, in the 20th century and has been a leader (since),” York said. “And libraries are still seen as a repository of knowledge and history even in the modern era.”

York added a library often gives people a first glimpse into a community.

Windham state Rep. Bob Lynn said the local library is a strong attribute to the town.

“I hope it will continue for many years to come,” Lynn said.

As part of the library’s Sesquicentennial celebration, people are asked to submit stories and artwork answering the question “What does Nesmith Library mean to you.”

Fine art, photography, video, writing, children’s drawings are all welcome and materials will be preserved as a digital archive with guest book memories and other photos. Email Nesmithlibrary03087@gmail.com for information.

The Friends of the Library of Windham also hosts a Buy-a-Brick fundraiser to help support the space with purchased bricks to be inscribed with supporters’ names.

One thing all library officials and supporters agreed on was that the local library continues to grow into the years ahead, while always maintaining a strong connection to the past.

“And one thing that hasn’t changed is the quality of the service,” Moltenbrey said.