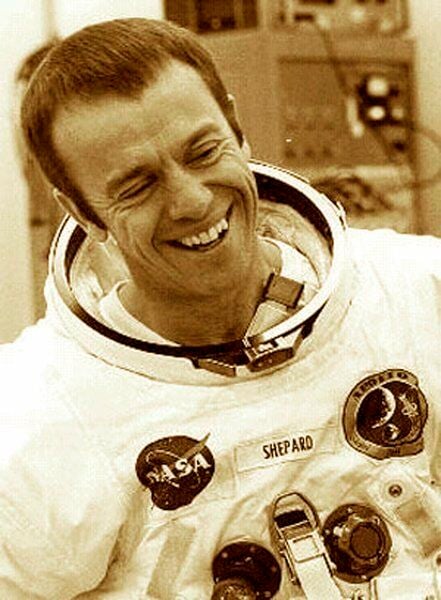 DERRY NEWS/File imageDerry's own first American in space, Alan B. Shepard Jr., took his moon stroll in February 1971 aboard Apollo 14. 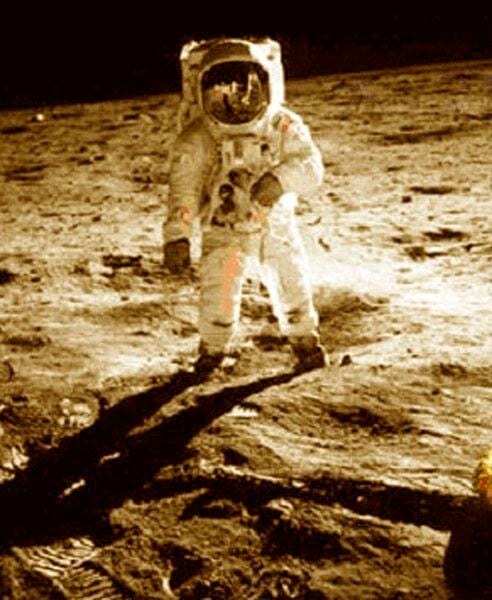 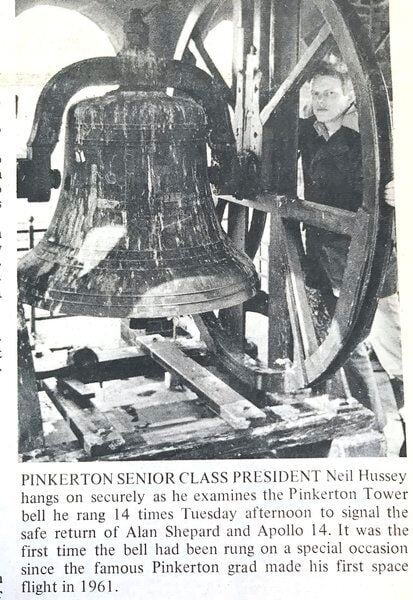 DERRY NEWS/File imagePinkerton Academy rang its bell in honor of famed class of 1940 graduate Alan B. Shepard Jr., on the occasion of his walk on the moon in 1971.

DERRY NEWS/File imageDerry's own first American in space, Alan B. Shepard Jr., took his moon stroll in February 1971 aboard Apollo 14.

DERRY NEWS/File imagePinkerton Academy rang its bell in honor of famed class of 1940 graduate Alan B. Shepard Jr., on the occasion of his walk on the moon in 1971.

DERRY — It wasn't quite enough for one of Derry's favorite sons to take a historic flight into space in 1961, making him America's first man in space.

Ten years later, Alan B. Shepard Jr. was at it again, landing on the moon on Feb. 5, 1971, and making his hometown ready to celebrate again.

Now 50 years later, Shepard's life and famed times are still remembered, with many planning special activities, and recalling memories of a time when space flight was an exciting prospect that brought fame to brave astronauts and also made a community proud.

Shepard and his crew blasted off toward the moon on Jan. 31, 1971, for a nine-day mission that would eventually land him on the lunar surface, the third Apollo mission to do so.

The hometown boy was famous for his golf shot while standing on the moon.

Derry had a soft spot for Shepard after his 1961 flight, being known then as the original "Space Town, U.S.A." and keeping Shepard's ties to the local community strong.

When Shepard climbed aboard Apollo 14 a decade later to take his turn heading to the moon, the Derry News once again featured and followed the hometown hero on an epic space journey.

In the Feb. 11, 1971, issue, Shepard’s eventual splashdown back home was greeted with “noisy relief” in Derry.

Residents created an impromptu parade up Broadway to celebrate Shepard’s moon walk. Fred Hooley even donned an asbestos suit to become a Shepard spaceman look-alike during the parade.

“It wasn’t the largest, but certainly the most spontaneous,” the newspaper headline announced on that day.

“It was appropriate that the Spacetown Cadets should be right up front with their band while back in the parade was a truck from Spacetown Auto Body Repair Shop,” the local paper reported. “Derry was still very proud of the native who again put Spacetown, U.S.A. on the map.”

Historian and author Richard Holmes recalled how Shepard's first flight in 1961 and the moon walk in 1971 sparked some differences.

"In 1961, we were a very small town, about 7,000, and most everybody knew either the hero or his family," Holmes said. "So many knew personally either Col. Shepard Sr., Alan's mother, the very outgoing Rena, or had watched Alan or his sister Polly grow up. He was our first space hero. We were now living in 'Spacetown' and our chests swelled with pride because we were from Alan's town."

Holmes said Shepard was a national hero and in demand across America.

By 1971, Derry had grown considerably and memories of Shepard may have been fading. Many were upset the hometown hero didn't visit more often.

"By the time of his moon walk, Alan didn't belong to us, he belonged to the nation," Holmes said.

Shepard was part of Pinkerton Academy’s class of 1940. The Derry high school named its teams the Astros following the original 1961 space flight. The high school’s mascot is “Astro Man” and buildings on campus are named for the astronaut.

When the famed alumnus took his steps on the moon in 1971, Pinkerton rang its historic bell to honor the Apollo 14 mission.

Pinkerton Headmaster Dr. Timothy Powers reenacted Shepard's famed lunar golf shot and hit a drive across campus recently. Other activities include videos created for social media to talk about Shepard's accomplishments, virtual trivia games and a video pictorial of areas around the community where Shepard is commemorated.

Powers said it's important to continue to honor Shepard, not only for the impact he had on the nation but to also recognize his importance as a Pinkerton graduate.

"He had to put a lot of hard work and dedication in to achieve it and it is pretty cool that an alum went to space," Powers said.  "We are very proud of all the things our alums have accomplished. Students are taught about the history of it and his."

Powers said the school continues to honor its alumni and share their accomplishments, whether local, state or more nationally recognized graduates.

A portion of Interstate 93 is named in Shepard’s honor and the local post office pays tribute to the hometown flyer.

Derry’s history museum has a Shepard display, with an entire room devoted to the local fly boy and his early life in Derry and future career as pilot and astronaut. Local libraries also honor the famed local space man.

For Powers, having Pinkerton honor Shepard's 50th anniversary of the moon walk is a welcome diversion during very challenging times.

"With everything that is going on, having a chance to honor and remember an event that occurred 50 years ago is pretty cool," Powers said. "There was a day that people never thought we would get to the moon and Alan Shepard was part of proving that it was possible. Right now things are difficult and challenging. We will find a way and the end of the pandemic will occur. We can learn from the accomplishments of the past to help us succeed in the future."