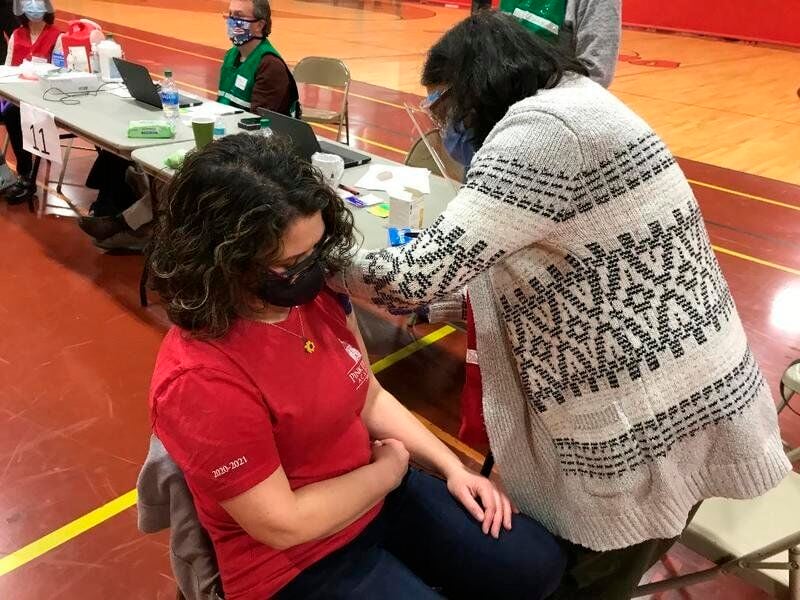 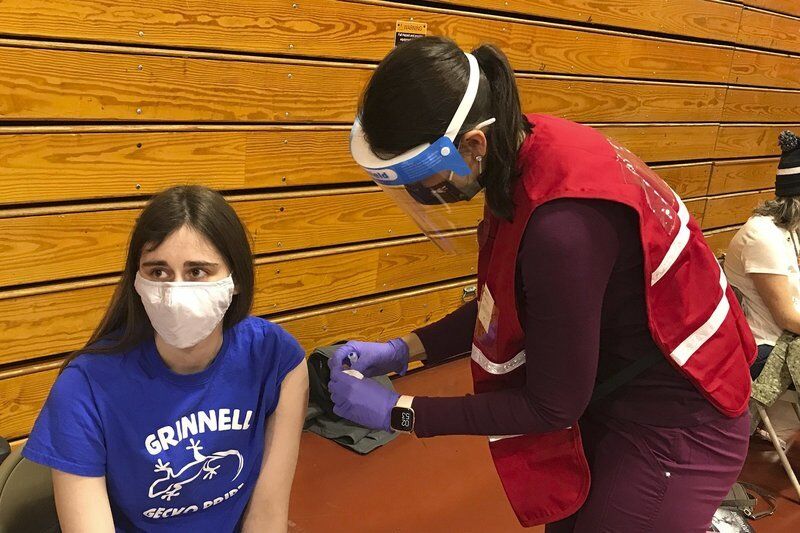 JULIE HUSS/Staff photoTeachers received the Moderna vaccine during a closed vaccine distribution at Pinkerton Academy Sunday. Teachers and staff along with educators from Pinkerton's sending towns received the first dose. At left, Erica Donahue, a paraprofessional in the Derry school district, receives her vaccine, given by Dr. Tanya Lawson.

JULIE HUSS/Staff photoTeachers received the Moderna vaccine during a closed vaccine distribution at Pinkerton Academy Sunday. Teachers and staff along with educators from Pinkerton's sending towns received the first dose. At left, Erica Donahue, a paraprofessional in the Derry school district, receives her vaccine, given by Dr. Tanya Lawson.

DERRY — There were many sighs of relief and feelings of hope as Pinkerton Academy hosted a vaccination clinic Sunday afternoon, with teachers, administrators and school staff getting that first shot in the arm.

The clinic was the first of two scheduled, offering initial doses of the Moderna vaccine.

The clinic was also open to educators and staff representing school districts in Derry, Hampstead and Chester, three of Pinkerton's contracted sending towns.

About 1,000 people are set to be vaccinated as part of the two clinics, part of the state's phase 2A of the COVID-19 process.

Many felt relief that this day had come.

"Everybody is in a party atmosphere," said Pinkerton nurse Linda Roy, who stood in the gym lobby at check-in tables.

That included keeping track of positive coronavirus cases, making sure students and staff remained safe while on campus, and also keeping those students in remote learning settings engaged and able to thrive.

“It has been a long, hard, emotional year,” said Nora Portnoy, Pinkerton’s director of health services. “Having a vaccine available to those who would like it is a step in the right direction.”

Portnoy added that being able to see the Pinkerton Academy community have this opportunity to get vaccinated is something to get excited about.

“It truly feels like we can see the finish line in the distance,” she said “We still have to be vigilant, but this is just an amazing feeling to be able to be a part of this.”

Portnoy said Sunday that those getting their vaccines had a renewed sense of hope.

"People come in jumping up and down," she said. "They are so grateful."

Pinkerton Academy Headmaster Timothy Powers said it was an exciting day and one that will "ease a bit of the stress" educators and staff may have been feeling.

“We are happy to be able to not only offer the vaccination to all of our Pinkerton employees but to those of some of our sending town schools as well,” said Pinkerton Academy Headmaster Dr. Timothy Powers. “We recognize the importance this plays in the lives of many people, and we are glad we can be a part of it.”

Pinkerton will host its second round of vaccinations on Sunday, April 11.