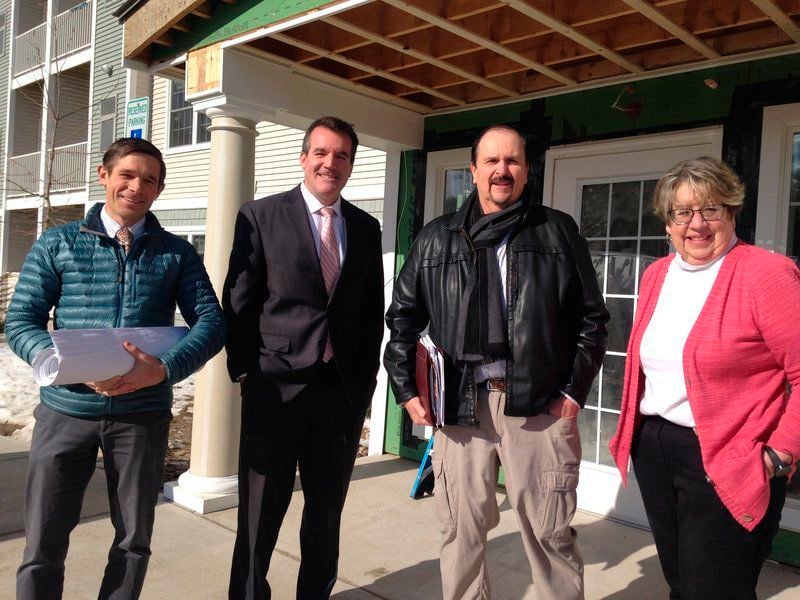 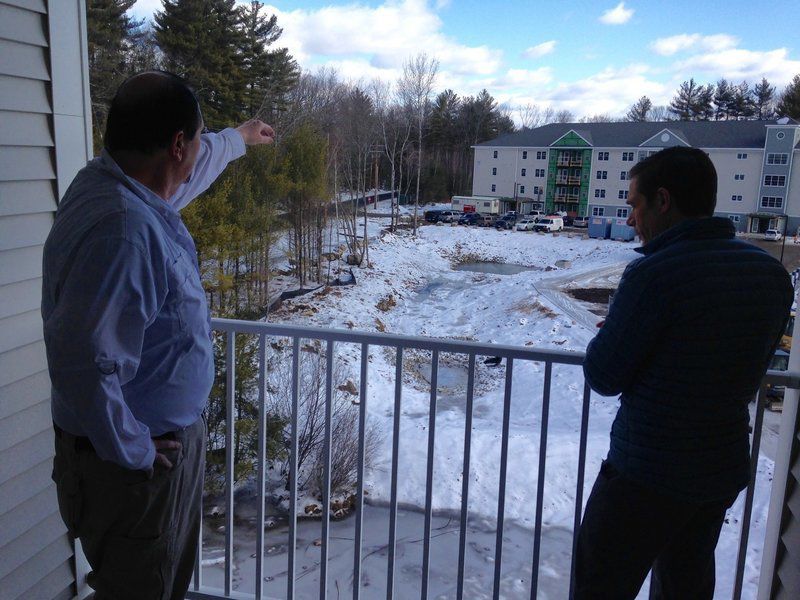 JULIE HUSS/Staff photoSteven Lewis, left, developer of the new Sanborn Crossing elderly housing facility in Londonderry, shows off the view from a terrace. At right is Rob Dapice, of New Hampshire Housing.

JULIE HUSS/Staff photoSteven Lewis, left, developer of the new Sanborn Crossing elderly housing facility in Londonderry, shows off the view from a terrace. At right is Rob Dapice, of New Hampshire Housing.

LONDONDERRY — A housing project now underway off Sanborn Road is being heralded as a more affordable way for seniors to live and remain in the community. And with new residents planning to move in within weeks, and more on a waiting list, the project is a popular one.

Sanborn Crossing at 30 Sanborn Road is a 102-unit, two-building development on 12 acres of property. It is open to residents 62 and older and rents are based on income levels.

Dapice said that income limits to gauge rent costs are based on the size of the household, and those limits are set by the Department of Housing and Urban Development.

The property was once used as a junkyard in decades past and is classified as a brownfield site, where past industrial or other uses may have caused potential contamination issues.

But the land, under strict remediation and cleanup through the years, was a location that could be earmarked for this use through various state programs and housing incentives.

The site was easily cleaned up, Lewis said, with old car parts and tires making up the majority of what was there.

Lewis said he hosted several open houses in weeks past and is happy with the response.

"I'm shocked at how many people show up," he said.

The developer has done similar projects in other communities, including Salem, and said Londonderry liked his past work.

Lewis said loam left from the construction process must remain on site, but will be used efficiently as part of the plan. And of the 12 total acres, only about 4-1/2 will be used for housing; the remainder for open space.

"This is the most energy efficient building I've built," he said.

During a recent tour of the site, Londonderry Town Manager Kevin Smith said Sanborn Crossing is a great addition to the community and will serve elder citizens well.

Smith said the once town-owned property landed in the capable hands of Lewis and Londonderry is happy about it.

"We wanted affordable housing," Smith said. "It was something the town needed."

Lewis said he is happy with how Sanborn Crossing is turning out, crediting Londonderry and all involved who supported the project.

"And there is not a project I'm not proud of," he said.