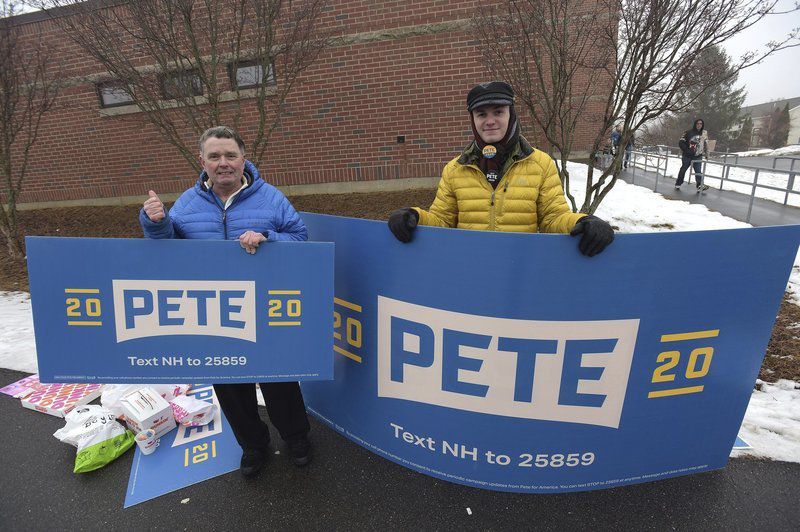 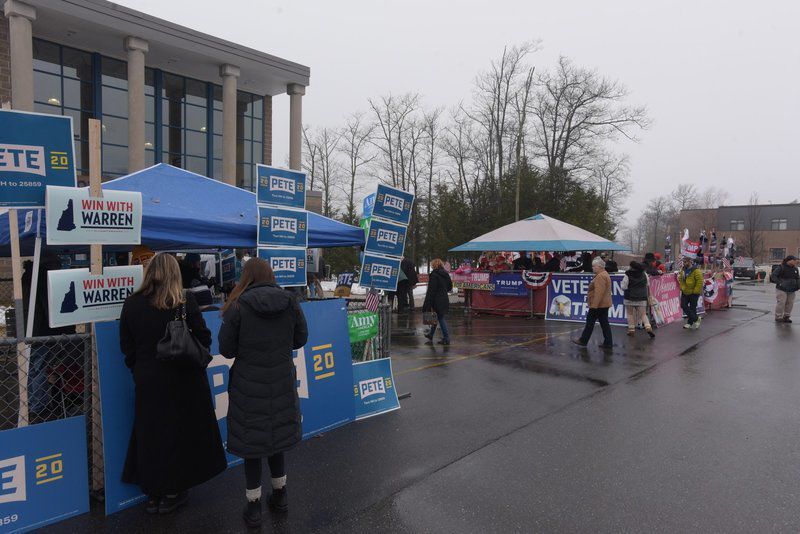 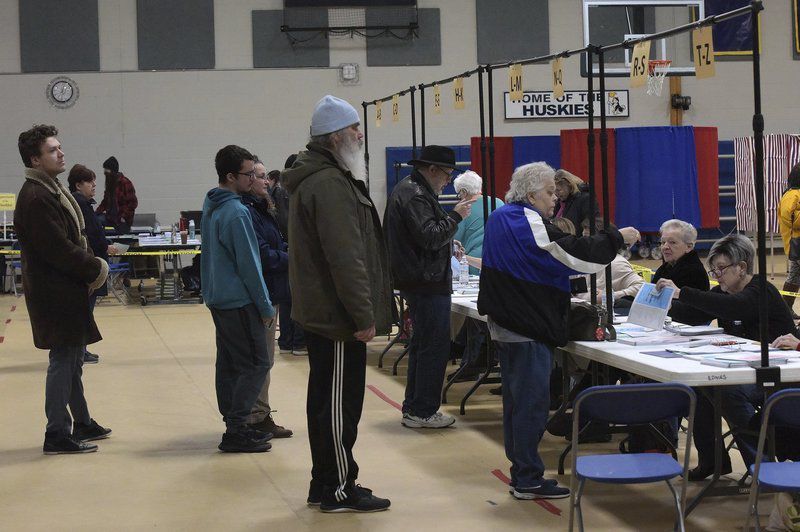 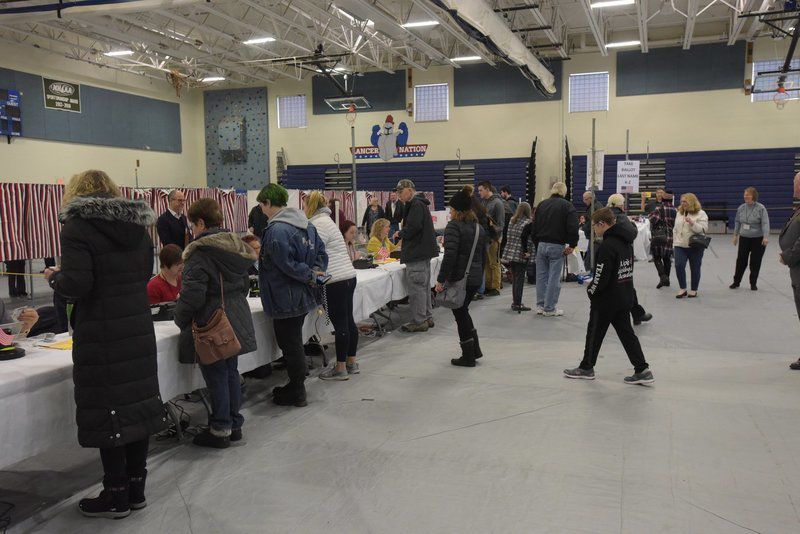 TIM JEAN/Staff photoResidents wait in line to pick up ballots before voting at Londonderry High School during the New Hampshire primary. 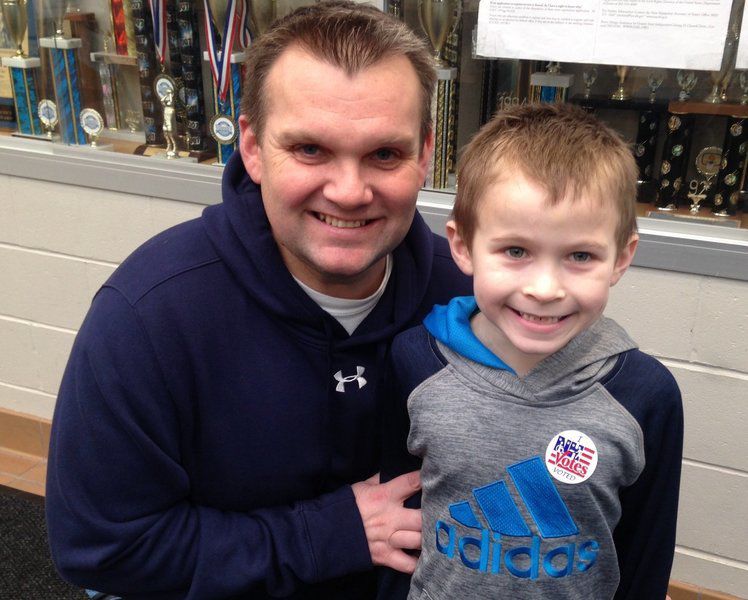 TIM JEAN/Staff photoResidents wait in line to pick up ballots before voting at Londonderry High School during the New Hampshire primary.

Communities all across the state started primary election day under drizzle and fog, with some early and long lines of voters waiting at the polls to cast ballots.

Voters hoping to offer support for favorite candidates, whether Democratic or Republican, came out to cast ballots, hold signs and speak to voters about why they hoped their candidate would win.

In Derry, voters lined up right from the start when polls opened at 7 a.m. at Gilbert H. Hood Middle School, one of three polling locations in town.

"There was a big line, all the way down," poll volunteer Tom Cardon said, pointing down toward a school hallway near the gymnasium entrance. "And it's been steady so far."

By about two hours into the morning, about 300 of Derry's 22,000 registered voters had cast ballots.

"We had a big bulge at the beginning," said Derry Town Councilor Richard Tripp, adding the stream of voters then slowed down a bit.

Tripp credited the town and election officials for making the voting process more streamlined and accessible for residents. That included updates in the way the voting flow was handled in the Hood school gym, the better location of the alphabetical letters when people signed in, and the general improvements made to make the day better.

That included training sessions for all moderators, officials and volunteers on election day, according to Supervisor of the Checklist Tina Guilford.

"We do take voter feedback," she said.

Derry resident Christine Lehoullier entered the polls at Hood still undecided on who to vote for. The independent said she did a lot of research on the candidates and said the primary season was very exciting to watch.

"I will make a thoughtful walk to the booth," she said.

Mike Lindstrom had his mind made up.

He brought along his 6-year-old son, M.J., to show him the voting process.

For M.J., he knew there were a lot of candidates out there hoping to topple President Donald Trump and said it might be time for someone else to have a chance.

Kerry Stap of Windham was in Derry holding a sign supporting Bill Weld, the former governor of Massachusetts. Stap said other family members were out and about supporting Weld at the polls.

Stap was a registered Democrat for a long time, she said, but just voted in her first Republican primary.

"I think he's a uniter," she said of Weld, "socially progressive, and fiscally more responsible than saying everything is free."

Stap said the current Democratic party is heading a bit to the "ultra left" and that she couldn't support the party anymore.

"I think (Weld) is more moderate in his views," she said.

In Windham, voting took place at the high school off London Bridge Road, and there were plenty of Trump campaign signs lining the road leading up to the school's parking lot, and only a handful of Democratic signs, mostly for Pete Buttigieg.

A contingent of Trump supporters lined the sidewalk outside the school building.

Town Moderator Peter Griffin reported that out of the town's approximate 10,000 registered voters, about 2,300 had cast ballots by 1 p.m.

"It's been steady all day," Griffin said.

In addition to voting, the high school lobby was filled with various tables touting community efforts, and organizations, including the Windham Lions Club.

Lions club members Clare Dowd, Renee Bailey and Patti Provenzano said since polls opened there had been a good crowd.

The women gave views on the primary day process and didn't hold back about who they wanted to be the next president.

For Dowd, it was another term for Trump.

"I like his honesty," she said. "I like what he's done. He's had a lot of people working against him."

Provenzano said it's the economy that cemented her vote, heralding her own investment and retirement savings success as a key factor.

Bailey, an independent voter living in Salem, said she would go vote after leaving her tasks with the Windham Lions.

"I haven't decided yet who to vote for," she said.

"Biden and Bernie, they are getting old, it's tough when you get old," Brown said. "I'm scared."

Londonderry's polls at the high school gymnasium were drawing supporters not only from the community but from other states, putting up stakes to support the current president.

Linda Eisenberger from Dunstable, Massachusetts, said she felt her home state was a conservative atmosphere for her to voice her views on her choice of candidate.

"It's such a liberal state," Eisenberger said. "I love Trump. I'm a born again Christian, he's for freedom."

Standing nearby, Londonderry resident Roger Fillio wore a Trump hat and said the president got his vote.

"He was a business man, already making his money," Fillio said. "And it's the biggest business in the world, the U.S. He's running it like a business."