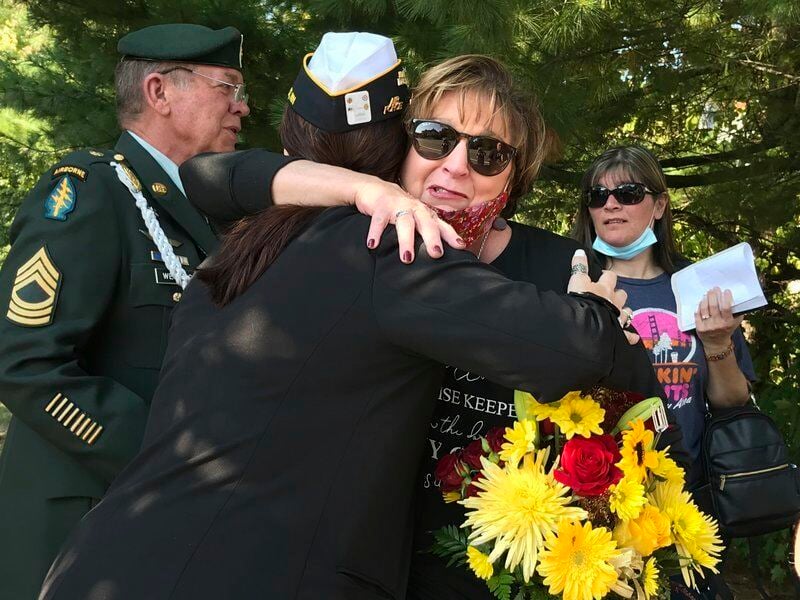 JULIE HUSS/Staff photoGold Star Mother Nancy Geary receives an embrace during a ceremony to honor her and her fallen Marine son, Michael Geary, Saturday. The ceremony was held near the bridge on Route 102/West Broadway, named in Geary's memory. 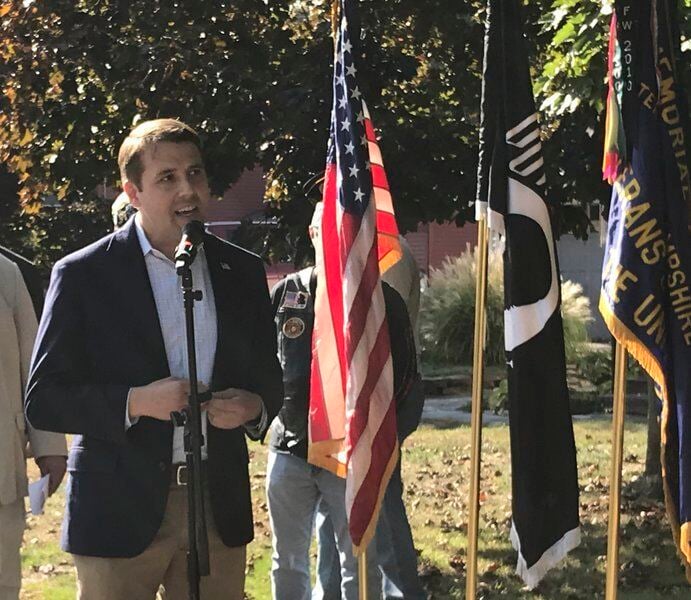 JULIE HUSS/Staff photoGold Star Mother Nancy Geary receives an embrace during a ceremony to honor her and her fallen Marine son, Michael Geary, Saturday. The ceremony was held near the bridge on Route 102/West Broadway, named in Geary's memory.

DERRY — A local mother who lost a son he was served in the military was honored last Saturday.

Nancy Geary, mother of Lance Cpl. Michael Geary, was heralded in a Gold Star Mother ceremony at the bridge on Route 102 named in memory of her son.

Representatives from both Veterans of Foreign Wars Post 1617 and Auxiliary, along with American Legion Post 9 gathered near the bridge to present Geary with flowers, honoring Gold Star Mother weekend and those mothers of fallen soldiers.

He was a 2009 graduate of Pinkerton Academy.

Following Geary's death, his alma mater honored him with a tribute as his motorcade passed en route to his burial place. Town officials, students and Pinkerton Academy staff lined up in front of the school as the procession drove by.

The bridge over Shields Brook on Route 102/West Broadway, was named in Geary's honor several years ago, after the approval in Concord of House Bill 1389.

Saturday's ceremony near the bridge was also attended by Chris Pappas, U.S. Congressman, town officials and other supporters.

Geary received two bouquets of flowers, one from each of the veterans organizations in town.

She said it's been a decade since her son's death but the pain remains.

"It never goes away," she said, adding she was totally humbled by the show of support near her son's namesake bridge in Derry.

Lenny Perkins, Department of New Hampshire D6 and Derry Memorial Commander, said Geary should always be proud of what her son sacrificed.

"And we dedicated this bridge every year to be able to remember him," Perkins said.

Pappas said it was his honor to be included in the service.

"We stand with Nancy today," he said. "And America is better off for his (Geary's) service."

The congressman told her to always remember the sacrifice not only of her son, but her own sacrifice, courage and resiliency.

Town Councilor Joshua Bourdon told the Gold Star Mother he hopes to raise his own two children to be as brave as Michael Geary.