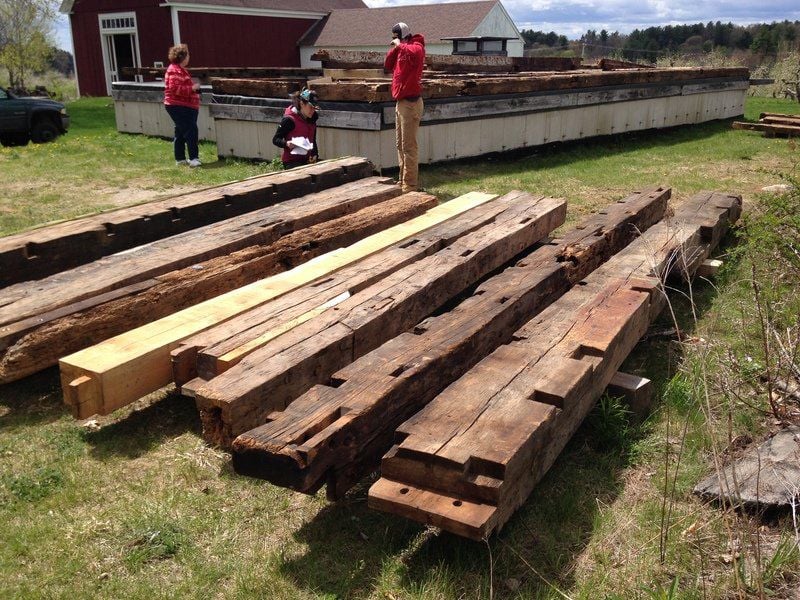 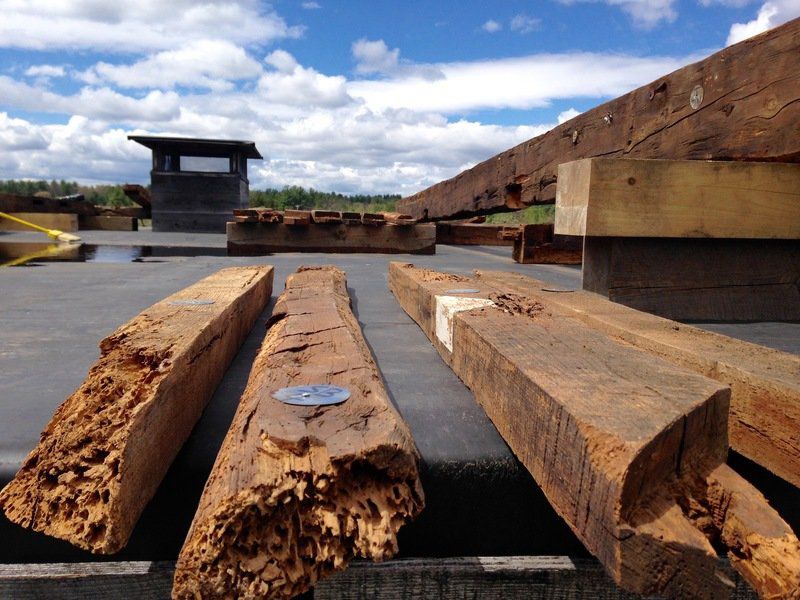 JULIE HUSS/Staff photoWood beams from the historic Morrison House are laid out one day near the town's museum property on Pillsbury Road. Preservation experts are analyzing the wood prior to doing a complete rebuild of the home, one of the town's oldest. 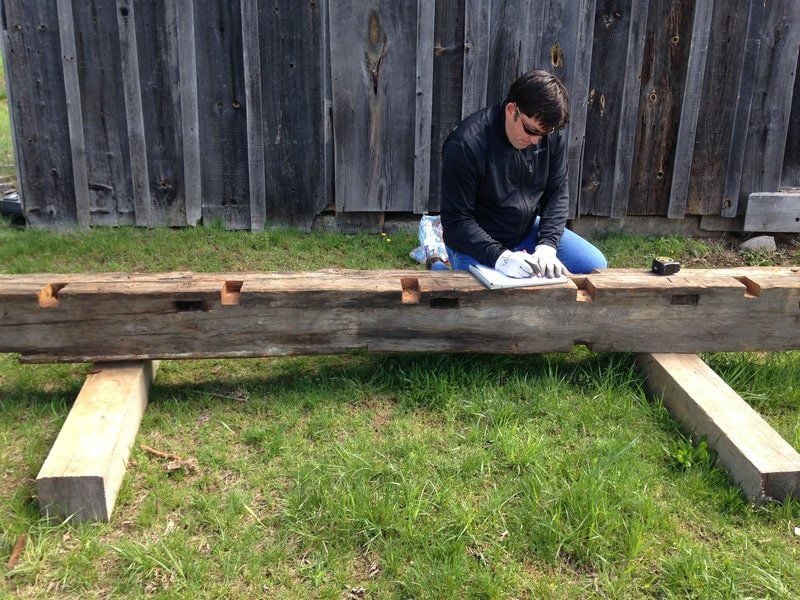 JULIE HUSS/Staff photo Brian Cox and other experts from Preservation Timber Framing analyzed and measured historic beams from the dismantled Morrison House at the site where the home will be reconstructed on Pillsbury Road.

JULIE HUSS/Staff photoWood beams from the historic Morrison House are laid out one day near the town's museum property on Pillsbury Road. Preservation experts are analyzing the wood prior to doing a complete rebuild of the home, one of the town's oldest.

JULIE HUSS/Staff photo Brian Cox and other experts from Preservation Timber Framing analyzed and measured historic beams from the dismantled Morrison House at the site where the home will be reconstructed on Pillsbury Road.

LONDONDERRY — It may be the town’s earliest known home, but right now it’s stored in pieces in storage trailers on Pillsbury Road waiting to be rebuilt.

That project is now in the good hands of experts who know their wood.

The Rev. William Morrison house, circa 1722, was donated to the town’s historical society in 2006 by Robert and Anne Perry. The building was dismantled in 2007 at its Gilcreast Road location by professionals and then moved in pieces to its current storage site at 140 Pillsbury Road.

Before being stored away, the wooden parts were all mapped and numbered as to where they were on the original building.

Since then, the foundation was laid along with some other support beams in place near the town's historical museum and other buildings on the property.

The Londonderry Historical Society is working with Preservation Timber Framing on plans to rebuild the house, that will use existing wood and new wood that is cut to match where it is needed in the construction, with Timber Framing experts using historical tools and methods to maintain all historical integrity during the process.

Once completed, the 1,200-square-foot-house will stand two stories tall.

Wood experts and historical society officials have spent time recently taking the old wood out of its storage containers to take a closer look at its condition prior to planning the home's rebuild project. A specific building plan will then be created.

Workers carefully inspected the wood with respect for its age and history, while making sure it is a good piece to use in the project.

Preservation Timber's Brian Cox spent time on one recent morning meticulously measuring the long beams and planks that were once the Morrison House. Aging beams and wooden boards were stacked around the property while being studied and analyzed.

He credited the expertise of the Preservation Timber Framing crew and their attention to detail and history.

Preservation Timber Framing has worked for many years across New England, taking on historical restoration and rebuilding projects. The business is currently working on major restoration work at East Derry’s First Parish Church to ready that historical meetinghouse for its 300th birthday in 2019.

Preservation Timber Framing's Arron Sturgis said there is a lot of work ahead, but there is a good percentage of usable wood for the Morrison house.

Other, newer pieces of wood will be used to fill in where needed.

Sturgis said the wood is mostly white oak, but there were a variety of wood in the beams and planks. When the home was first constructed, the builders would have wanted superior quality for the structure.

"They would have chosen locally and harvested the best," Sturgis said.

And houses changed over time, Sturgis noted, with additions and added on sections.

Once the Rev. Morrison building is complete, it will be part of the historical society’s complex on Pillsbury Road, near the Morrison House museum, the Parmenter barn, Clark blacksmith shop and the Litchfield carriage shed.

Sturgis said it will be a lot of work but the outcome should be good.

"Our goal it to see what we need to do to make this stand again," he said. "We will make a real solid preservation plan."