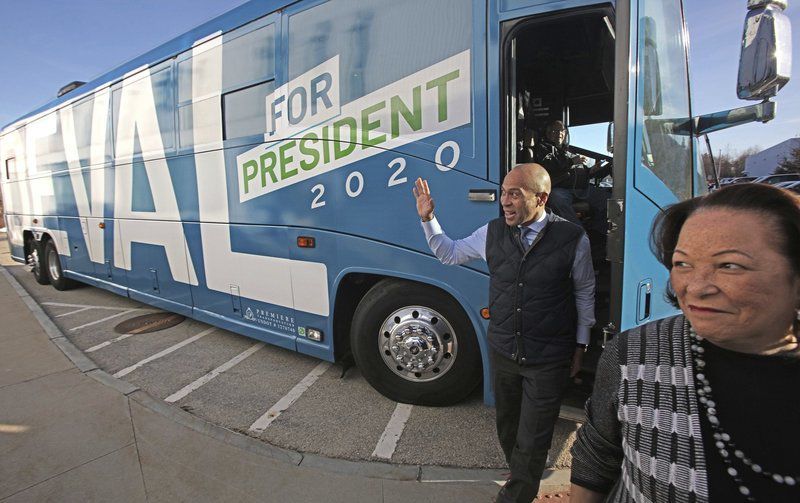 MIKE SPRINGER/Staff photoFormer Massachusetts Governor Deval Patrick waves as he steps of his presidential campaign bus with his wife, Diane, for a town hall-style event at Stonyfield Organic in Londonderry. 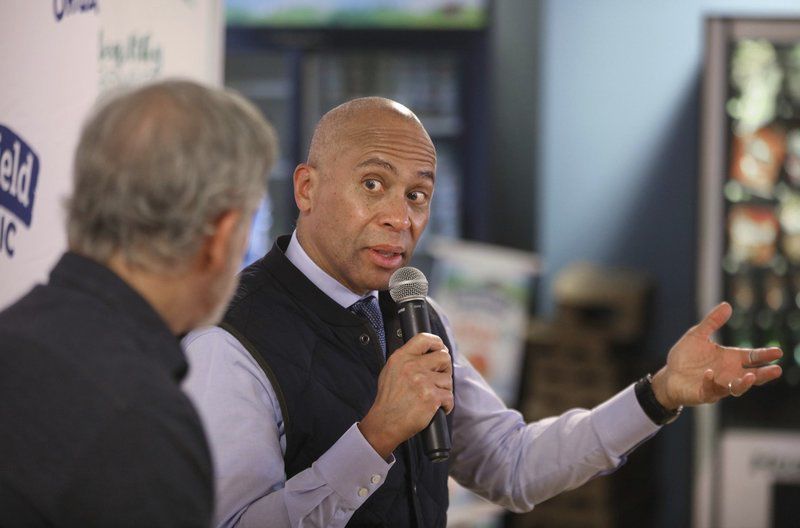 MIKE SPRINGER/Staff photoFormer Massachusetts Governor Deval Patrick waves as he steps of his presidential campaign bus with his wife, Diane, for a town hall-style event at Stonyfield Organic in Londonderry.

LONDONDERRY — He served two terms as Massachusetts’ 71st governor and led the state in many successes, including strong support of education and high rates of student achievement, entrepreneurship and energy efficiency.

And that, Deval Patrick said, is why he would make a great president of the United States.

He is one of several Democratic presidential candidates who visited Stonyfield over the past several months.

About 40 people filled a cafeteria at Stonyfield’s facility on Burton Drive, most were employees of the company and a few other guests wanting to hear more from the candidate.

“You are truly a hero of mine,” Hirshberg said.

Patrick started the conversation by offering a look into his background growing up in south Chicago, raised by a single mother, and often being supported by public assistance to help get by.

“I was an avid reader,” Patrick said, “but I don’t remember owning a book until I was 14.”

But he said he got a lot of support and found himself truly having faith in the American dream.

Many people today, Patrick added, are losing faith in that dream.

“We have an unfit and unkind president,” Patrick said, but said even before Donald Trump took office, poverty in America was still a problem.

Patrick said soon after taking office for his first term as Massachusetts governor, the economy tanked, but his administration got right to work.

“We succeeded, we got results because people turned to each other instead of on each other,” he said.

Patrick also credited the field of fellow Democrats running for the White House, calling many his friends.

But he stressed he has the experience and commitment to produce results once on the other side, if he wins the presidency.

“All of us have got ideas, but I have results,” he said.

Earlier this week, Patrick unveiled his Reform Agenda, policies to repair the government systems to align with values and to enable the American dream.

It’s a bold vision for the future, the former governor said.

“My Reform Agenda is about making meaningful fixes to big systems that consistently fail to meet modern needs and have long excluded some Americans,” Patrick said.

He added that consistent with his record as governor and, if elected president, his administration would provide a fix to broken systems so they enable, instead of impair, that American dream.

Through his life, Patrick said he received a lot of blessings and got a lot of breaks, and was taught not to resent anyone that had more than he did.

“I was taught to play by the rules, and work really hard and I can get a break, too,” he said. “I went to well-prepared schools and the bus got me to a job in the summer. And public assistance when we needed to get back on our feet.”

Michael D’Amico of Lawrence came to hear Patrick speak. He said he has heard several candidates over the past several months. After Patrick concluded, D’Amico stood in the lobby holding a Deval Patrick sign and hoped to meet the candidate as he left the cafeteria.

“I really wanted to hear what he had to say today,” he said.

“I’m very interested,” she said. “The process here is very specific, but very impactful to what happens.”