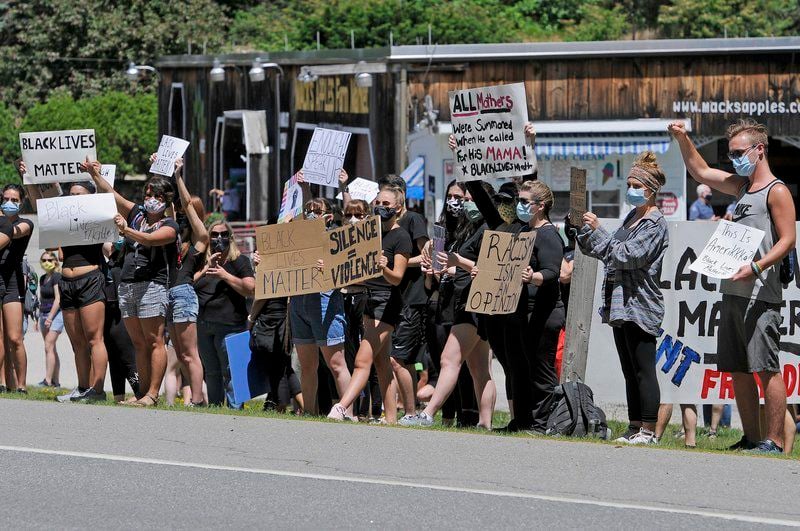 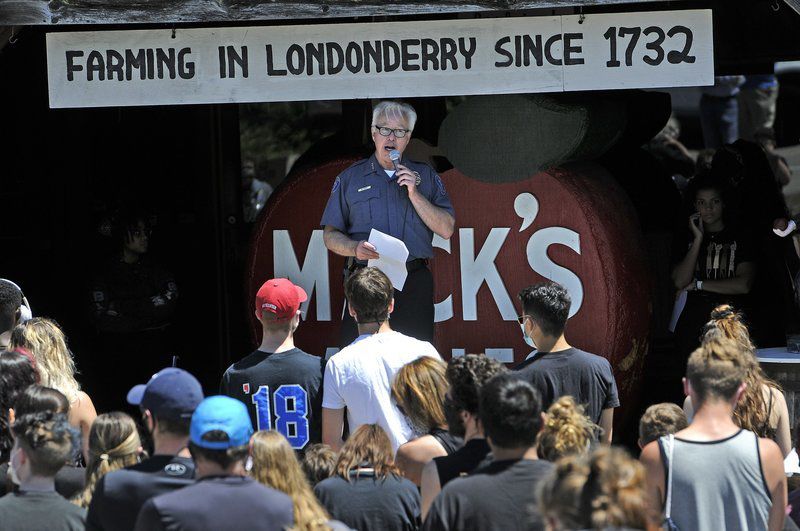 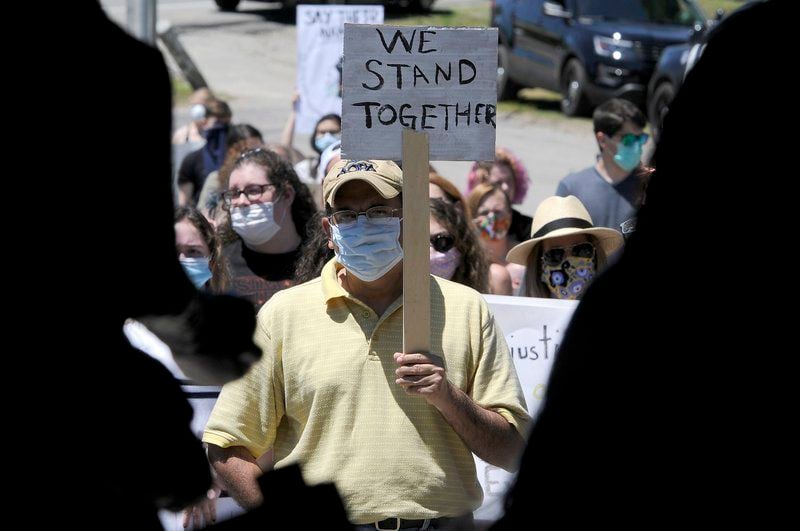 TIM JEAN/Staff photoA man holds a sign that reads "We Stand Together" during a Black Lives Matter rally held at Mack's Apples farm stand in Londonderry. 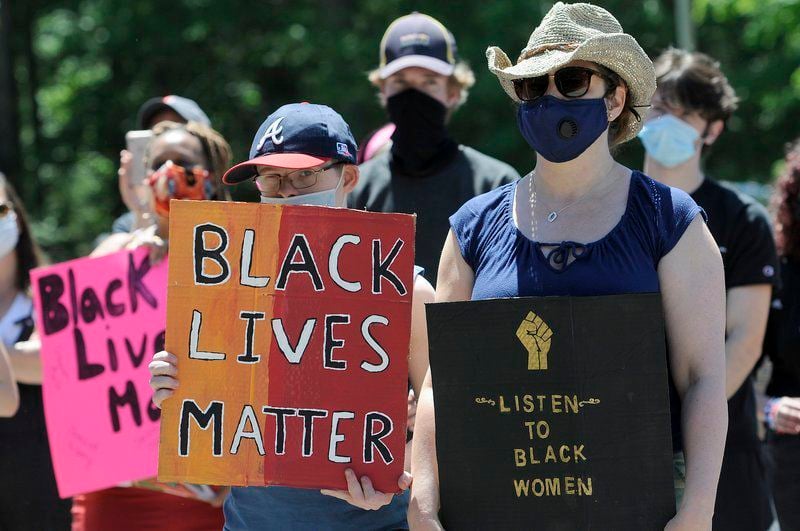 TIM JEAN/Staff photoA man holds a sign that reads "We Stand Together" during a Black Lives Matter rally held at Mack's Apples farm stand in Londonderry.

LONDONDERRY — Twelve-year-old Levi Bethune proudly held his sign high for all to see.

"If not now, when?" the sentiment scrawled on the sign read.

Levi, his younger brother and mother were among hundreds attending a Black Lives Matter rally in front of the Mack's Apples farm stand on Mammoth Road last Friday afternoon.

A collective gathering of many wearing masks, holding signs and offering cheers for a cause filled the parking lot at Mack's, as a police drone hovered overhead and other police and fire officials stood close by during the rally.

Londonderry police Chief William Hart kicked off the rally, offering his own views and sentiments about police departments, what is wrong, what is right following the tragic death of George Floyd in Minneapolis, Minnesota three weeks ago that sparked protests across the nation, calling attention to incidents of police brutality.

"We as police have a greater responsibility," Hart said, "for respect and decency."

Last week, Hart had presented a statement during a Town Council meeting stating his views and his department's views on the current state of affairs across America and how he felt about his personnel and their role in the community.

Hart, supporting a role in making social injustices right, said he stands with those who feel oppressed and said he hopes for a better community and nation.

"I stand for hope," he said, adding he hopes for kindness to one another, a promise to "bend our arc" toward justice and compassion.

The Londonderry rally joined several others held in past weeks in area communities, calling for racial justice and equality, with people coming out from all areas to take part in the event, show their support and hold up signs of protest and community.

A long line of speakers took the microphone at the Mack's farm stand, as farm patriarch Andy Mack Sr. sat nearby and listened. He is known in the area for his many political views painted in words on large signs along the roadways, citing his views on supporting the climate, and other political issues.

Speakers told stories of their own personal views of the world growing up as people of color, saying it's time for everyone to make the decision on what side of history they hope to be on.

Interspersed among the speeches were collective chants of "Black Lives Matter" and "I can't breathe," a call to Floyd's final words caught on video for the entire world to see.

Rally organizer Shauna Choate took the microphone, saying that when she moved to Londonderry, she found a less-than-diverse community.

She told tales of being in school and having racist words scrawled on her desk, and feeling like she wasn't accepted.

"We are fed up with being picked on," she said, "and bullied."

She hoped that change could happen, within the school district and beyond, where people of color could feel accepted and not made to think they were not as important or valued.

"These experiences have made us who we are," she said. "and have not defined us. What side of history do you want to be on?"

For Jessica Bethune of Derry, bring her two young sons to the rally was a learning experience and a way for her to teach her sons about history and treating each other with respect.

"I feel like it's history," she said. "I wanted them to be on the right side of history."

For Levi, it was a way to make a statement.

"In this day and age, we shouldn't be having people die because of the color of their skin," he said.

After speeches ended, all rally attendees took their place along Mammoth Road and held signs as cars drove by blowing horns and many showing support with signs in car windows.