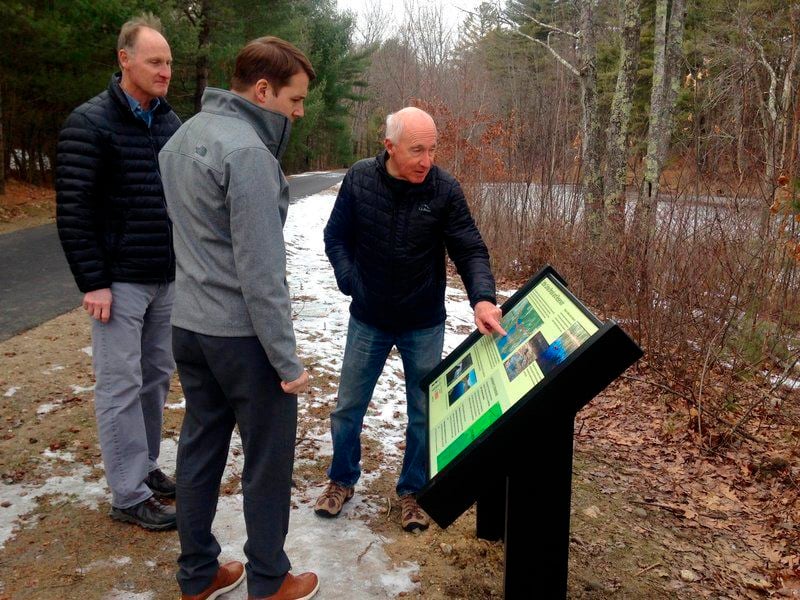 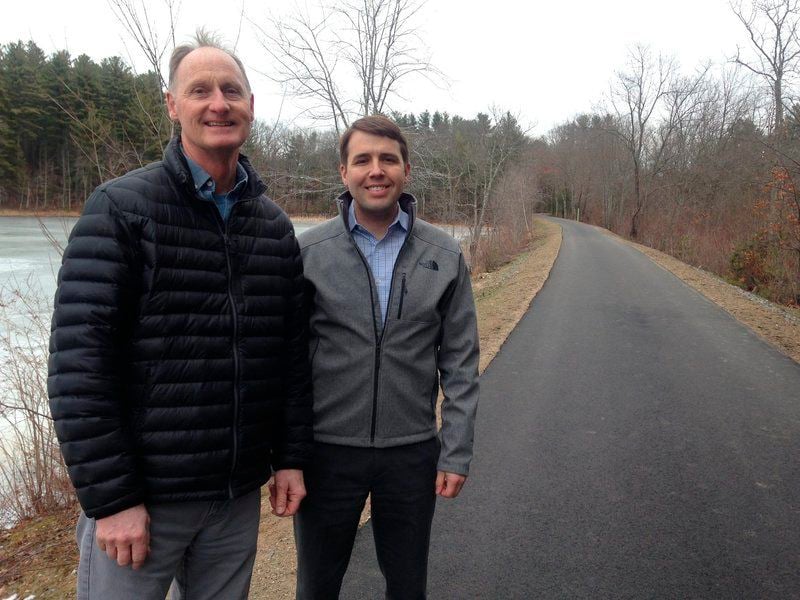 The group gathered on the newest paved portion of Londonderry’s trail system off Mammoth Road in north Londonderry, a 1-mile segment that is the Phase 5 Little Cohas portion of the trail. Trailways hosted a ribbon-cutting event last November on this paved portion that leads up to Manchester-Boston Regional Airport.

For Pappas, it was an opportunity to speak with local leaders and give more information on the Active Transportation System Act he introduced alongside fellow legislators Dan Lipinski of Illinois and Jared Huffman of California.

“Smart infrastructure connects Americans with the people and places most important to them,” Pappas said. “This legislation will expand our active transportation networks, providing additional ways to knit communities together, support recreation and respect our environment.”

That’s what Londonderry trail supporters say is a main goal for putting its successful trail system in place.

Before Phase 5 was complete, it was a rough patch of overgrown rail bed. About 3,500 old railroad ties had to be pulled along the path, as well as tires and other remnants of trash and tossed materials.

Pappas and the others walked the trail, passing by several informational markers explaining the history and landscape. The trail also passes by Little Cohas water bodies and small rustling water falls spilling from one area to another.

Londonderry’s first paved mile of trail system was finished in 2013. Now, with Phase 5 complete, the total amount of trail pavement is 4.8 miles.

The next phase has already gained support at the ballot box, with 77% of Londonderry voters approving a warrant article at the polls in 2019 to help the trail system move forward.

That, according to Smith, was one of the most impressive numbers of votes supporting a warrant article last year.

Londonderry’s trail system was also one of nine statewide chosen for money from the Transportation Alternatives Program, or TAP. A total of $5.7 million was slated to be awarded to Granite State communities for projects including sidewalks, multi-use paths and rail trails.

Londonderry will use TAP funding to build a 1-mile, multi-use path along the sides of Harvey, Webster and Grenier Field roads — Phase 6, that will extend the trail up near the Manchester-Boston Regional Airport. Design and engineering could begin this year, with a goal of constructing that segment in 2022.

Rimol pointed out one project near a trail entryway off Mammoth Road where a small garden was placed to honor supporters like Kluber.

“Part of the rail trail isn’t just the pavement,” Rimol said. “It’s the beautification of the area, the interactive signs.”

Pappas said he is excited that Londonderry has embraced the trail effort.

“Part of the message we want to bring back to Washington, D.C. is (communities) making smart investments for health, for transportation opportunities,” Pappas said. “We are on the verge of making a great network across the state.”

Pappas said more conversations in Washington on the new legislation could happen later in the spring.

“We’re excited to see where the conversation goes over the next couple of months,” he said, adding the House of Representatives could take up discussion on infrastructure bills and he hopes the Active Transportation System Act is one of them.

Exeter,NH - Kenneth Hamilton Gould A celebration of Ken's life will be held March 7th at 10 a.m. Join his family and friends at the Pilgrim United Church of Christ, 197 Middle Road, Brentwood. A reception will follow at Riverwoods.