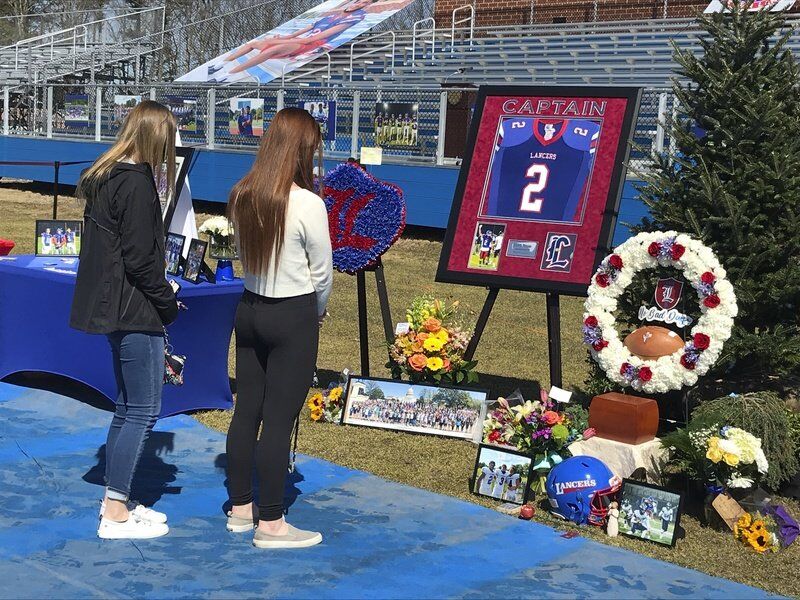 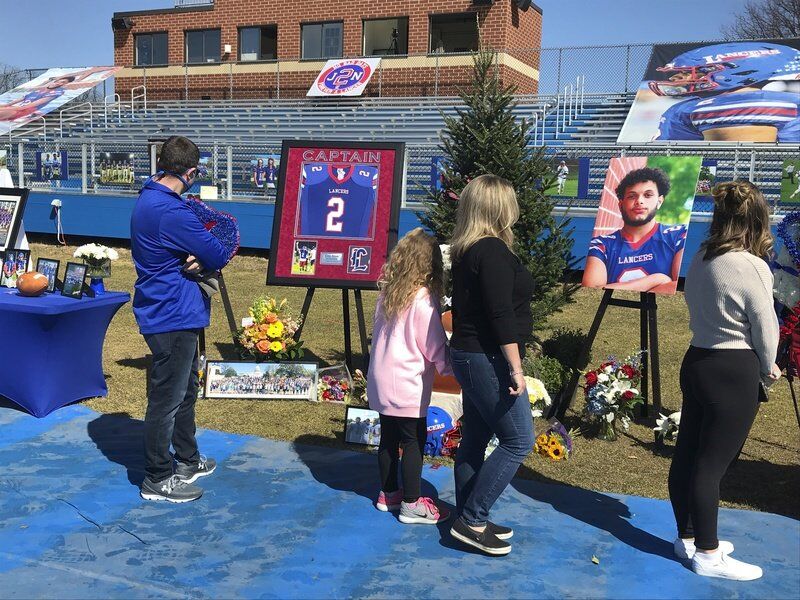 JULIE HUSS/Staff photosThose who came out Sunday afternoon to pay their respects and honor Jacob Naar of Londonderry were able to see memorials, sign a guestbook, and share their memories of the 17-year-old and the impact he had on the entire community.

JULIE HUSS/Staff photosThose who came out Sunday afternoon to pay their respects and honor Jacob Naar of Londonderry were able to see memorials, sign a guestbook, and share their memories of the 17-year-old and the impact he had on the entire community.

LONDONDERRY — Images of a smiling teen proudly wearing his No. 2 football jersey graced the Londonderry High football field on Sunday as the community mourned and remembered the life of a lost member of Lancer Nation.

The school hosted a celebration of life under sunny skies to honor senior Jacob Naar.

The 17-year-old died in a car crash in Londonderry on March 12 and was remembered by not only the school community, but the entire town for having a positive attitude and being a strong role model for others.

His favorite phrase, “No Bad Days,” lit up a sign in front of the school as friends, family members and school and town officials came out to honor the teen.

The celebration invited people to come out during three time frames to ensure social distancing and make sure as many people who wanted to pay their respects could do so.

“We are looking forward to a wonderful tribute to Jacob Naar, and to show his family our continued love and support,” said Londonderry High Principal Jason Parent. “They are special members of Lancer Nation and we are honored to host this gathering.”

Music played as a continuous line of people walked quietly across the field.

Some people came in groups, while others came alone.

A group of athletes sporting Pinkerton Academy Astros jerseys came to show their support. Teachers came to support their students, friends hugged. Children in younger grades came out with their parents to honor this member of Londonderry High’s class of 2021.

As people strolled across the field, waiting in line to pay their respects to family members and to see memorials set up near the press box bleachers, they passed many reminders of Naar — from a jersey hanging on a lacrosse net, to many images, some larger than life, and two field scoreboards displaying his No. 2.

“You could go to him and talk about anything, and he’d have an answer for you,” Perron said. “He really, really, really taught me a lot and I really think I’m going to devote everything I do this season to him.”

Will Reyes, a senior, considered himself Naar’s best friend. He sat quietly in the bleachers with others to show support for their friend.

Reyes said he would always remember the good times he and Naar shared.

“And the impact he made on everyone,” he said.

Assistant Principal Katie Sullivan told the School Board recently that the Naar family is the most loving and caring family in town, saying their continued support and love of their son keeps everyone else strong.

“We came there to help them,” Sullivan said, “but instead they turned the tables. They wanted to make sure we got the word out, how much they love and adore this community.”

Sullivan added that the family wants everyone who loved their son to continue to “live, laugh and love.”

“They want people to know it’s OK to cry for Jake,” she said, adding that it is also important to go on and live.

“We lost Jake but we all carry on his name in memory forever in this town,” Sullivan said.

She added that he lived life to the fullest and had a positive impact on everyone.

“It was easy to have a good day when Jake Naar was part of your life,” Sullivan said. “He will be greatly missed.”

A scholarship fund has been set up in Naar’s memory.