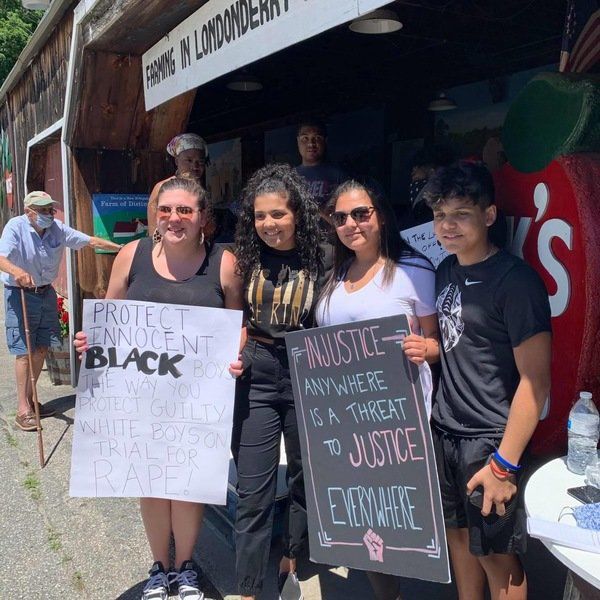 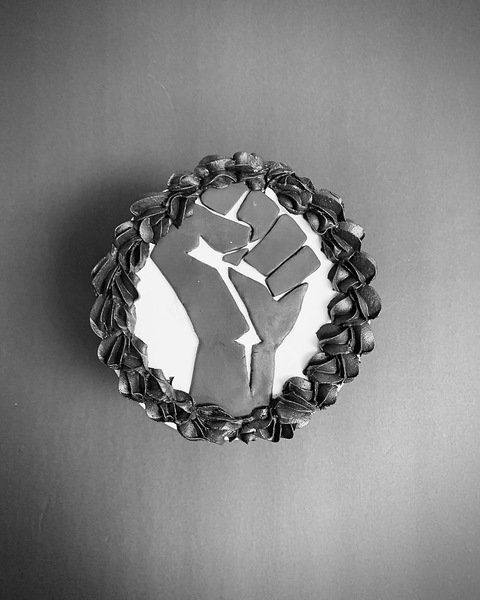 Courtesy photoOlivia Brutus baked this black and white cake, which was auctioned off and raised $1,100 for The Loveland Foundation, a charity that helps black women and girls get therapy.

Courtesy photoOlivia Brutus baked this black and white cake, which was auctioned off and raised $1,100 for The Loveland Foundation, a charity that helps black women and girls get therapy.

LONDONDERRY — Between working multiple jobs and owning her own bakery business, Olivia Brutus didn’t have a chance to attend a Black Lives Matter protest in the first week after George Floyd’s death. However, she found another way to support the movement.

The 21-year-old baked a chocolate cake with buttercream frosting. On top of the cake, she featured a black fist representing solidarity with the black community and around the cake she added three yellow stripes, representing the symbolism of the Black Lives Matter movement.

Then Brutus auctioned the confection off for The Loveland Foundation, a charity that helps black women and girls get therapy.

“I’m not very good with my words and I often use baking to express myself,” said Brutus, who owns A Sweet Slice. “I want to see a change and be part of the change.”

Brutus ended up raising over $2,000 for the foundation — $1,100 from the cake auction and an additional $980 from individual donations.

Other bakers across the country are similarly using their skills and social media to raise money for charities that support black people. A day after Brutus auctioned her cake, an Instagram account was started by three Washington, D.C. bakers called @bakersagainstracism is challenging people all over to also sell baked goods to raise money for charities with sales through this weekend honoring Juneteenth, which commemorates the end of slavery.

Two weeks after starting that account, there have been over 7,000 posts using #bakersagainstracism posted.

Sandpiper Bakery in Gloucester is also participating in the challenge by selling a box of cookies with proceeds going to the Massachusetts’ chapter of Black Lives Matter and The Okra Project, which helps provide resources for black transgender people, according to the bakery’s website.

As a young black woman growing up in Londonderry, Brutus lived a more “sheltered life,” she said. Prior to the protests that have been occurring across the country daily since the death of Floyd in late May, she hadn’t had much exposure to other cultures or having an open dialogue about them, she said.

Her advice to anyone right now is to “Get out there and educate yourselves.... It’s really sad what’s going on, it’s crazy.”

Brutus has used social media to help her educate herself and find resources on race issues.

This is a moment for education, learning and finding causes to give back to, Brutus said.

“My biggest thing is education, even as a black woman, I’m educating myself about other cultures,” Brutus said.

In high school it was a sociology class that opened her up to thinking about other cultures, she said. That class was an elective, and she thinks there should be more education on race in the school system.

As a black business owner, she understands systemic racism has played a role in her and her family’s opportunities, she said. And her family’s support has been vital to helping her with her business, she said.

Brutus has always had an entrepreneurial spirit.

It was passed to her from her father who owns Brutus Auto in Manchester. She had been pursuing business in college and has since taken time off to focus on her baking business.

She has been cooking since she was a child and her grandmother gave her a KitchenAid mixer. Brutus taught herself how to make cakes from scratch through watching online how-to videos. She started making cakes first for family and friends before launching her business.

Her favorite part is seeing how her work can bring joy to others.

“Seeing people’s happiness, seeing the smile on their faces, knowing I contributed to part of their special day,” Brutus said. “I always say celebrate your life with a sweet slice.”