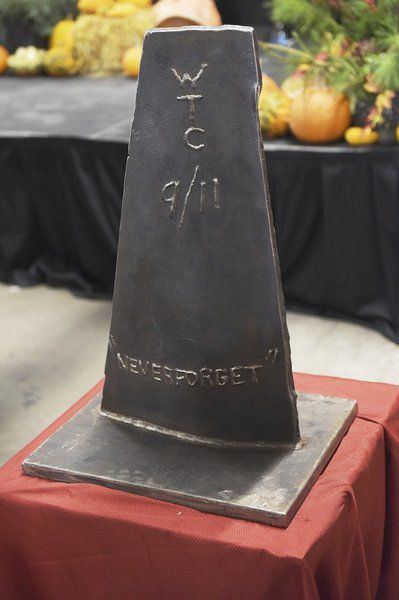 TIM JEAN/Staff photoA piece of the World Trade Center will be used as the centerpiece of a memorial at Londonderry's Central Fire Station. 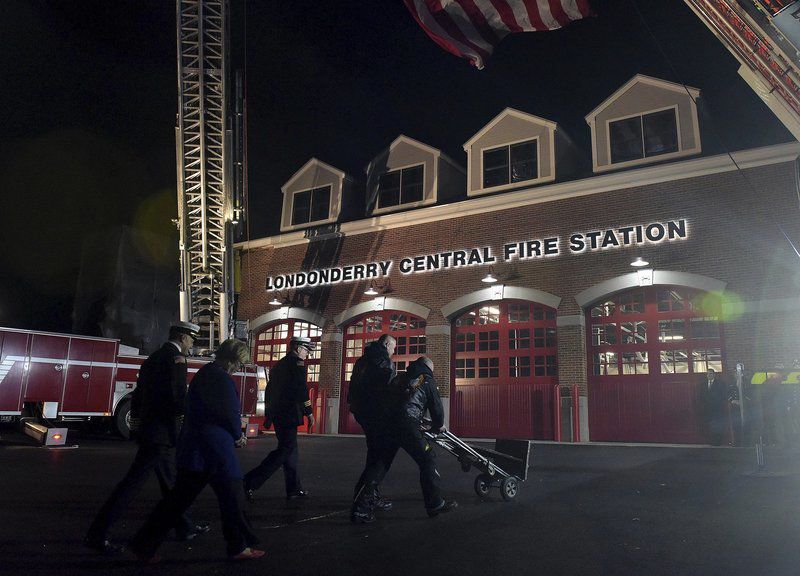 TIM JEAN/Staff photoLondonderry Fire officials walk with Catherine Christman from the Tunnel to Towers Foundation and members of the Patriot Riders Honor Guard as they wheel in a piece of the World Trade Center into Londonderry's Central Fire Station. 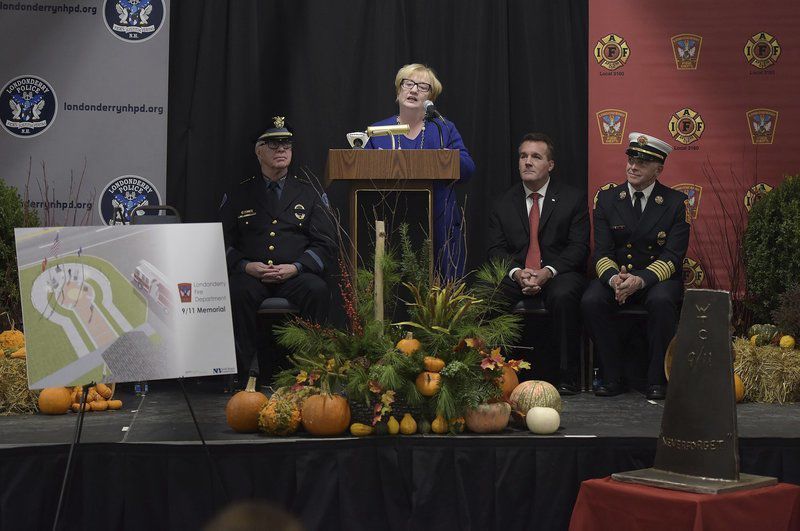 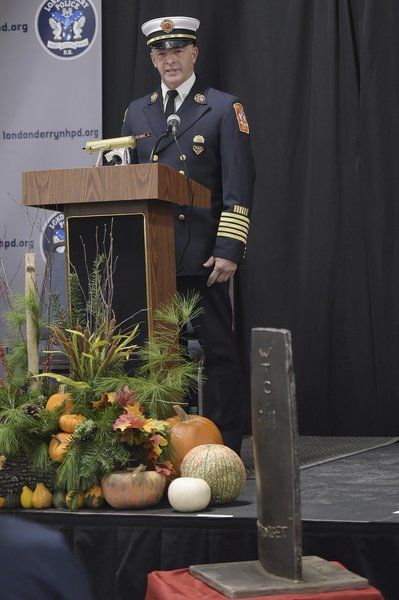 TIM JEAN/Staff photoA piece of the World Trade Center will be used as the centerpiece of a memorial at Londonderry's Central Fire Station.

TIM JEAN/Staff photoLondonderry Fire officials walk with Catherine Christman from the Tunnel to Towers Foundation and members of the Patriot Riders Honor Guard as they wheel in a piece of the World Trade Center into Londonderry's Central Fire Station.

LONDONDERRY — It was a salute to fallen heroes as a piece of American history made its way to Londonderry.

As darkness fell Friday afternoon, a motorcade arrived at the Central Fire Station carrying a steel relic from the World Trade Center, made possible through the Stephen Siller Tunnel to Towers Foundation, named in memory of a fallen 9/11 firefighter.

As the piece was removed from its trailer, a huge American flag blew in the wind. Londonderry police Capt. Patrick Cheetham played the bagpipes nearby.

With much visible emotion on the faces of fire and police officials and others gathering at the fire station, the 3-foot, 60-pound section of the fallen towers was brought into the station in silence and placed carefully on a display while many people stood in salute.

Many commented that the steel structure, inscribed with the words “Never Forget,” resembled the state of New Hampshire.

“So our kids know what happened that day,” O’Brien said.

In June 2016, the Tunnel to Towers Foundation was entrusted by the Port Authority of New York and New Jersey — that owns the World Trade Center site — with the care and distribution of pieces of the towers.

The pieces are given sparingly and under appropriate circumstances, said Catherine Cristman, spokesperson for Tunnel to Towers and Siller’s cousin.

Cristman said her cousin was off duty that day — Sept. 11, 2001 — but ran several miles from the closed Brooklyn-Battery Tunnel to the World Trade Center to help, carrying 60 pounds of gear.

“If there’s one thing I’ve learned since those attacks, not all courage is found on a battlefield,” Cristman said. “It’s found wherever or whenever.”

And this particular day would have been Siller’s 53rd birthday.

Cristman said Londonderry secured its own piece of the World Trade Center after the local fire department assisted in transporting a piece of the tower to Gander Airport in Newfoundland in 2016.

As part of the transport from New York, retired Londonderry fire Lt. Michael Roberts headed up the detail that safely handed off the steel relic in Kittery, Maine.

Roberts, now a deputy sheriff in Rockingham County, remained in touch with the Tunnel to Towers group, Cristman said.

For Roberts, it was hard to think of everyone he wanted to thank, adding it was a great honor, but was done by “all of us.”

But first, he wanted to acknowledge Stephen Siller and what he did that day, running from the tunnel to the towers and helping many along the way.

“He made a decision to go above and beyond,” Roberts said.

When it was time to head to New York City last week to bring the piece to Londonderry, O’Brien said it was a 14-degree day and 600 miles to travel both ways.

On the return trip, the motorcade and trailer carrying the piece were escorted by police and fire officials representing different states along the way, in addition to members of the International Association of Fire Fighters Motorcycle Group New Hampshire Chapter that drove to New York and back.

Cristman said she hopes having a piece of the towers in Londonderry will help inspire others to perform acts of kindness.

“May its presence enrich Londonderry forever,” she said.

For O’Brien, it was something he wouldn’t forget soon. He thanked everyone that made the journey to New York City and back.

“To those who went with me and share this bit of history, it will be forever embraced in my heart,” O’Brien said.

The piece will eventually become part of a permanent 9/11 memorial at the front of the fire station, set to be complete by next June.