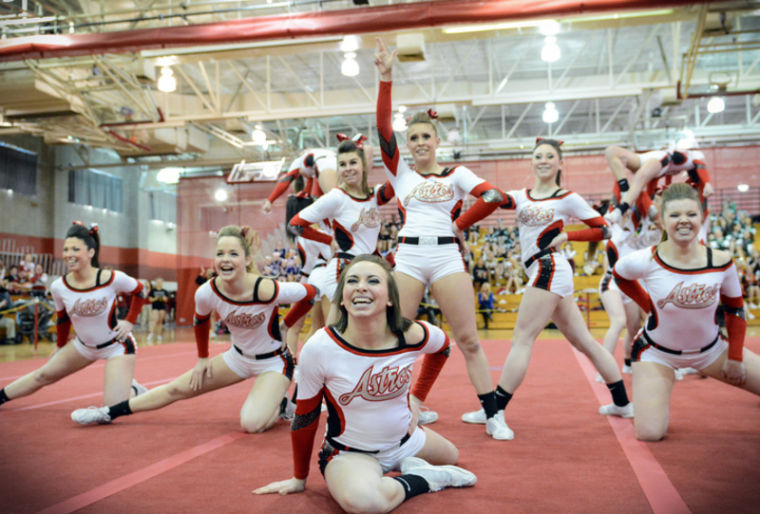 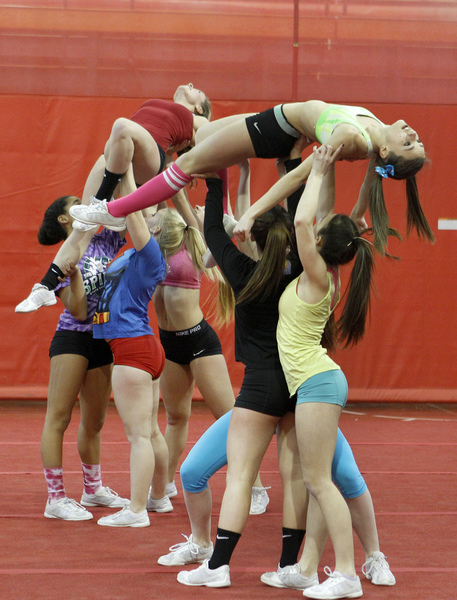 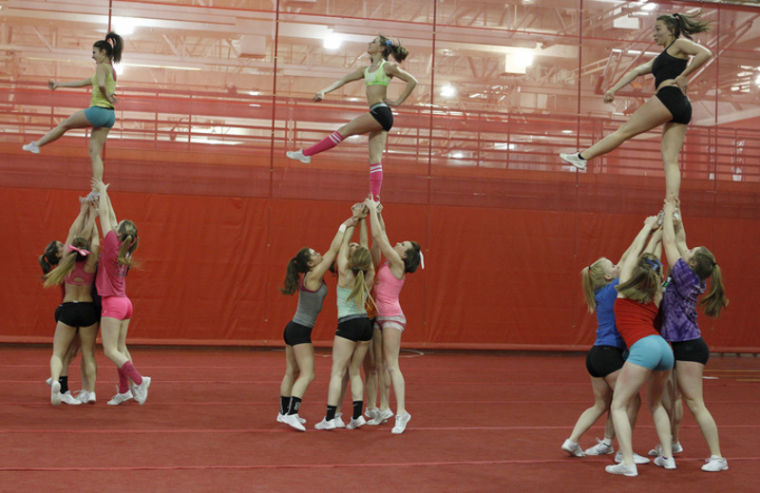 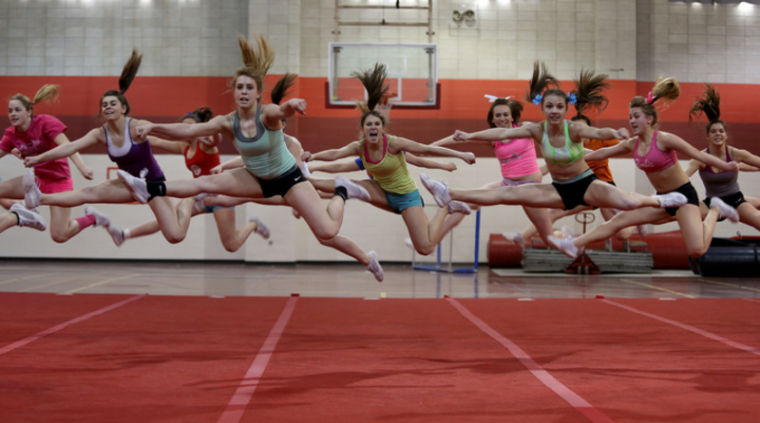 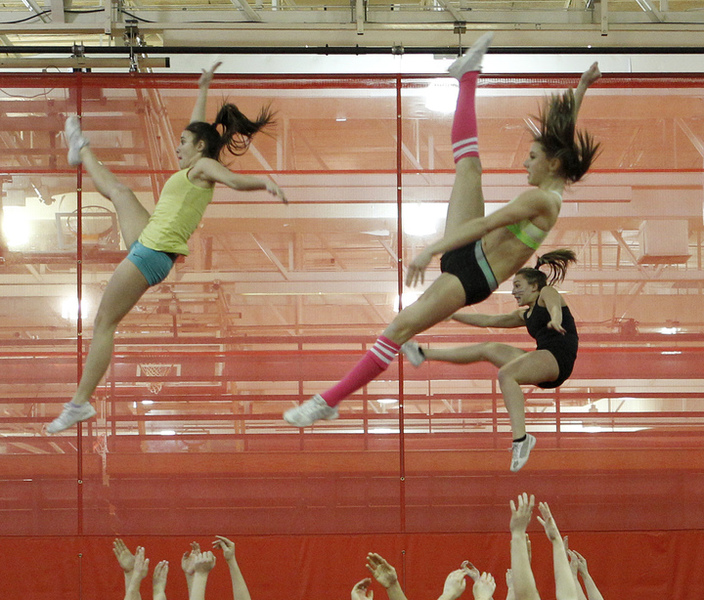 Cheer team members fly in the air as Pinkerton's varsity team prepares for its last competition of the season last week. 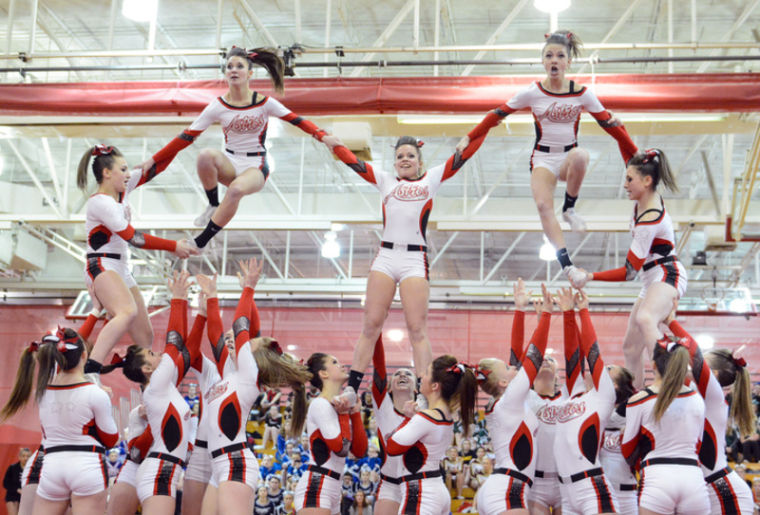 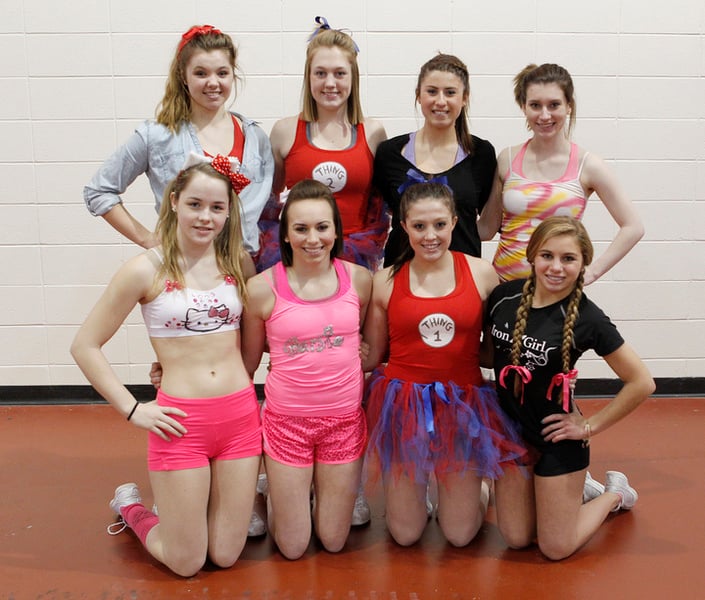 Cheer team members fly in the air as Pinkerton's varsity team prepares for its last competition of the season last week.

DERRY — This team has a lot of spirit.

The Pinkerton Academy cheerleading teams are riding high after securing an 18th state championship win earlier this month. Both varsity and JV teams took the state crowns in their divisions.

Coach Michelle McCarty has led the varsity team for 13 years and said they are exceptional young athletes.

That greater mission is not only on the mats when cheerleaders toss, tumble and call out their cheers. It’s about giving to others, supporting each other and the school community.

Last week, senior squad members gathered with other teammates for a final practice schedule of the season. Most of the eight seniors will be going on to cheer at the college level.

“This is the biggest group we’ve had that are going on to cheer at (the college level),” McCarty said.

Her team is the most decorated in the state, winning state honors in both fall and winter seasons. McCarty is proud, saying no other program across the state has achieved this.

She is proud of what they’ve accomplished. The secret to the group’s success is a lot of friendship, hard work and commitment to helping others.

Being a stellar athlete is one part of the total package, McCarty said. The rest comes from a student’s academic success, kindness and character.

During tryouts, McCarty is looking for a well-rounded student.

“I want to see who they are,” McCarty said. “It’s important to me they are good people.”

This past weekend, Pinkerton’s cheerleaders took second place at the New England competition in a field of nine state champions from around the region.

That was a final high school journey for the senior members.

Once they go off to college, some said it wouldn’t be like being at Pinkerton.

“It’s never going to be an experience like this,” Megan Chaganis said.

McCarty expects many of her young athletes to return home at the holidays and visit. There may be some tears shed at their return, she said.

“We’re all very close, a very close family,” said Kristina Toney, junior varsity coach and former Pinkerton cheer team member. She is a member of the Class of 2011.

Toney came to Pinkerton during her sophomore year and said she found a home on the spirit squad.

“You can’t be an individual on this team, it’s like having 23 sisters,” senior Chelsea Bousquet said.

Senior Ariana Moran said they all love what they do and work hard. Regular practices last week included a lot of gymnastics, strength training and routine work to prepare for the weekend’s New England competition. Seniors were also experiencing their last practice schedule of their Pinkerton careers.

McCarty said she has been very blessed for many years to be able to lead such a successful program at Pinkerton.

She said many of her past athletes send her letters to thank her for the support and guidance.

Her cheer team represents Pinkerton well, McCarty said, serving as young ambassadors on and off the competition circuit. They are leaders and earn every point they receive when they compete.