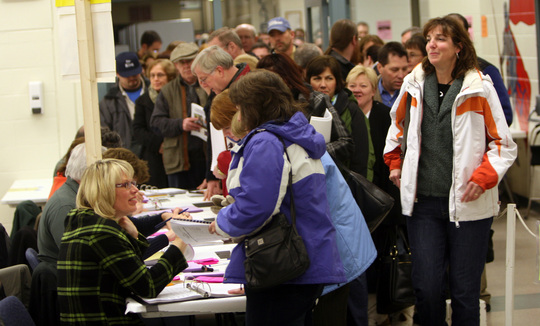 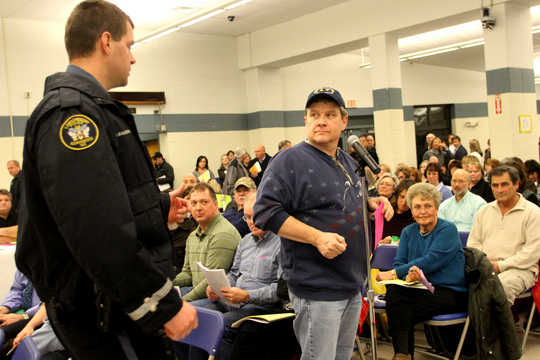 Former town councilor Brian Farmer, right, was deemed out of order during the school’s deliberative session and escorted from the building.

Former town councilor Brian Farmer, right, was deemed out of order during the school’s deliberative session and escorted from the building.

LONDONDERRY — The 500-voter quorum was met at the Londonderry school deliberative session Friday night, but the historical moment was short lived.

A quorum of 500 registered voters is needed to make any changes to the proposed warrant articles that will go to the ballot on March 8. Each year, attendance numbers are low, usually fewer than 100 people.

At issue was the School Board's default budget of $63,222,575, which was being argued mostly because of 87 staff cuts. Many who attended said they feared additional cuts were going to be made because of an e-mail that went around town.

Jennifer Corbit, a parent of two elementary children, said she came to the meeting because she was concerned about the possibility of additional cuts being made to the budget.

"I'm especially concerned that extracurricular activities and special education services could be cut," she said.

Just before 8 p.m., moderator John Michels announced there were 464 voters in the Londonderry High School cafeteria. As discussion wore on, Michels made announcements on the local cable channel and people texted and posted on Facebook to encourage more residents to come to the meeting.

The number of voters went over 508 just before 9 p.m., but then dropped again as voters slowly drifted out.

One of these who left early was Rep. Al Baldasaro, R-Londonderry, who left around 8:30 p.m.

"I said all along, if the quorum wasn't met, I wasn't staying," he said.

Baldasaro, Town Councilor Sean O'Keefe and former Town Councilor Brian Farmer sued the School Board and Michels in November, challenging the constitutionality of requiring a quorum of 500 people at the deliberative session.

They tried to obtain an injunction against this year's session, but on Jan. 20, Rockingham Superior Court Judge Tina Nadeau said the petitioners did not provide information "sufficient to warrant the grant of this extraordinary measure."

It took almost two hours from the start of the meeting to reach 508 voters.

But by the time Michels called for a ballot vote to make sure there were still 500 people in the room, enough people had left to bring the vote total to 446. That meant a motion on the table to restore two school-to-career positions, for a total of $107,912, could not be voted on.

Lingering hard feelings over the lawsuit against the school district surfaced at the meeting.

"Some people said I was a henchman," he said. "I'm here to refute all of that. If you are here, because you were frightened by that e-mail, good for you because you're here."

School Board member Steve Young asked Farmer if he did in fact "sue the school district," but was ruled out of order by Michels.

After the first ballot was tallied and found to be under 500, Farmer again stepped to the microphone.

"To answer your question, yes, I did sue the school district," he said.

Michels told him that he was out of order, but Farmer continued.

"You have no quorum now," he said. "You can't make changes."

Michels again told Farmer he was out of order and ordered him removed from the room by a police officer.

Michels said he followed Farmer out and told him he could return as long as he "didn't go off in the same direction."

"He told me he planned to be civilly disobedient," Michels said. "So he left the building."

The rest of the warrant articles were read without incident. All the articles move to the ballot for March 8.