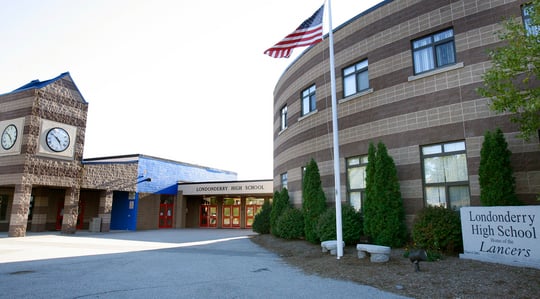 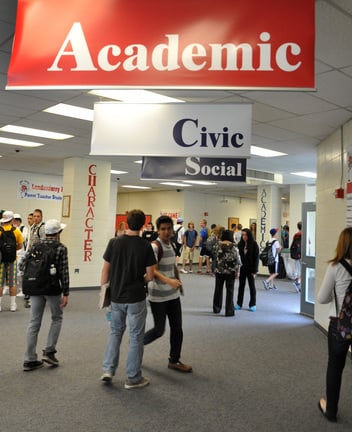 LONDONDERRY — The New England Association of School and Colleges will conduct an accreditation visit at Londonderry High School Nov. 14-17. The last visit was in 2000.

"We sent a 150-page, self-study report ahead of time," principal Jason Parent said. "Now we will verify what we've sent when the NEASC team comes for the three days."

The accreditation team will speak to students, parents, staff and the administrators during the visit.

Over the last thee years, Parent said, he and his team of administrators and teaching staff have reworked the school's mission statement .

"Although I don't expect anyone to memorize the mission statement, I want them to be familiar with the seven key words from it," Parent said.

These words — safe, nurturing, opportunities, academics, character, citizenship and success — are painted on pillars in the main lobby and written on banners in the school colors — red, white and blue.

"We try to weave the words into our lesson plans as well," said Steve Juster, an English teacher and a member of the school's accreditation team. "We have school-wide rubric that reflect the mission statement."

Kim Lindley-Soucy, one of two curriculum coordinators, said that varies from class to class.

"For instance, we may incorporate it into our Spanish classes and the kids will have to look up the message and translate it," she said.

But one unified expectation is that the school's 1,735 students be self-directed learners and there is a comment section on report cards to evaluate each student in that area, Parent said.

"We received input from the entire staff for the self-study report," Lindley-Soucy said.

"We came up with a list of school-wide strengths and weaknesses," Juster said.

In addition to being a mission-driven school, the team listed among its strengths teachers' use of varied strategies to assess students, a program of studies that allows for all students to engage in challenging coursework, intentional recognition of student work and achievement, excellent maintenance of facilities, leadership roles not defined or limited by title, strong outreach to parents and a positive attitude.

"We are especially proud of our alternative education programs," Parent said. "We try to find a way to make each student excel. As a result, we have a dropout rate of less than 1 percent."

Ninety percent of Londonderry High graduates go on to four- and two-year colleges, he said.

Some areas of weakness the team identified are the lack of an auditorium, having only a single computer lab, the need for increased teacher collaboration time and space needs to store records.

English teacher Mary Lukas DeWinkeleer created an eight-page edition of the Lancer Spirit newspaper for the NEASC visit, highlighting the school's accomplishments over the last 10 years.

2003: An additional house was added to total four houses, including a new band room.

Marching Lancers participate in the Tournament of Roses parade.

2005: Wellness implemented into the curriculum.

2006: Response to Intervention started for students who are struggling academically, socially and behaviorally.

2008: Marching Lancers perform in the Cultural Festival in Beijing for the 2008 Olympics.