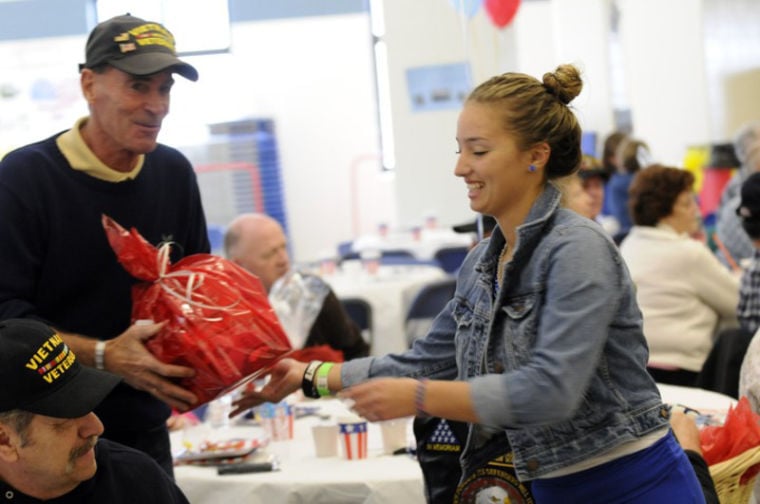 Marissa Roger, 17, hands a gift basket to Paul Brassard during the Londonderry High School Pay it Forward Club's Veterans Day breakfast. Brassard served in the Army during the Vietnam War. 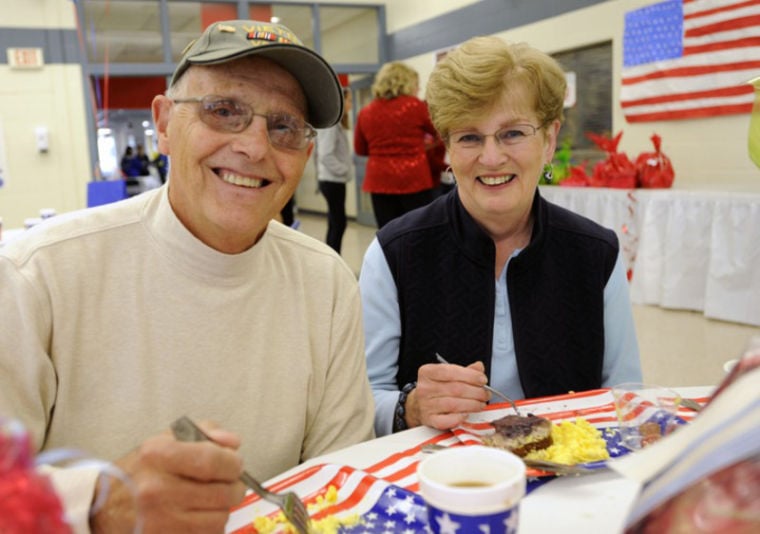 Marissa Roger, 17, hands a gift basket to Paul Brassard during the Londonderry High School Pay it Forward Club's Veterans Day breakfast. Brassard served in the Army during the Vietnam War.

LONDONDERRY — It’s one step forward with a lot of giving back.

Students in Londonderry High School’s Pay It Forward Club are working hard to make a difference in the lives of others.

The club hosted a breakfast Saturday to show area veterans that they are appreciated. It’s one of a long list of club activities throughout the year.

“It’s a way for me to give back,” Londonderry High senior Eric Kenison said. “We are all so fortunate and anyway we can help is great.”

Kenison staffed the high school entrance door as veterans and guests arrived. Many were shuttled to the door by other students driving golf carts to help with transportation.

Nick Flanders, also a senior, said he was lucky in his life and wanted to share with others.

For Flanders, being part of this club is an opportunity to show others he cares by doing simple things like offering a kind word or helping at an event.

“It gives me a chance to help those that might not have what I have,” he said.

The Pay It Forward Club is popular, with more than 25 students signing up on a regular basis to choose volunteer activities as part of the mission to “pay it forward.”

That’s the mantra of the club every day — to offer some simple help to those needing it most.

“She has a binder in her office,” she said. “We flip through it and we sign up for a ton of events. It’s awesome to see how easy it can be.”

Those volunteer opportunities can be anything from handling a Toys for Tots drive to helping children at a local YMCA or serving meals at Derry’s Sonshine Soup Kitchen.

The breakfast drew a crowd of veterans from around the region. Sullivan said this was the first year the event was held to coincide with the town’s annual Veterans Day parade and ceremony that took place after the meal.

Veterans went away with donated gift baskets after their meal.

“This is beautiful,” he said.

Students took the time to sit at tables with veterans and hear their stories.

World War II veteran Herb Billingsley of Derry said he comes to Londonderry every year to honor Veterans Day and he would be making his rounds on Monday during Derry’s observances as well.

“You will see me at about four places in Derry,” Billingsley said.

Club member Andrew Mitchell said hosting the veterans was a great way to hear what they went through and how important their service was.