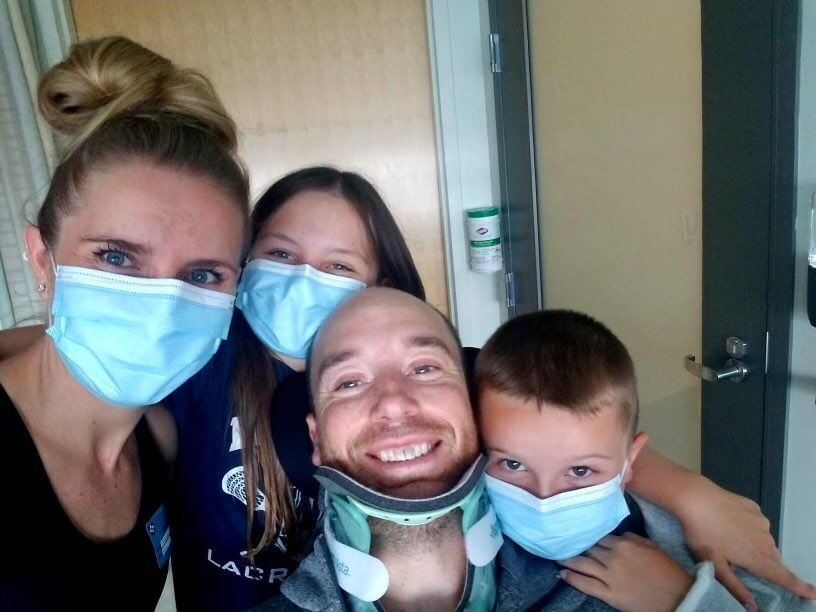 Jim Harvey smiles in the hospital with his wife and children by his side. The community has rallied around the family since July, when Jim was paralyzed from the chest down in a mountain biking crash. 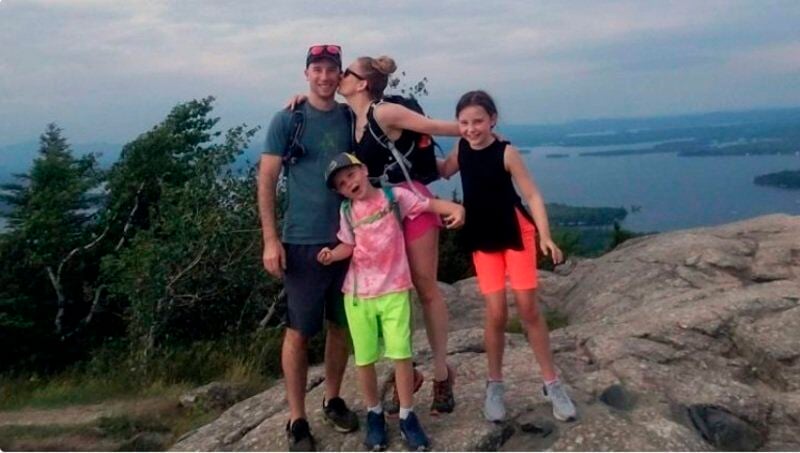 The Harvey family, shown here, has received hundreds of thousands of dollars in donations after Jim Harvey became paralyzed in a biking accident.

Jim Harvey smiles in the hospital with his wife and children by his side. The community has rallied around the family since July, when Jim was paralyzed from the chest down in a mountain biking crash.

The Harvey family, shown here, has received hundreds of thousands of dollars in donations after Jim Harvey became paralyzed in a biking accident.

But for the 40-year-old father and husband, well known in his community, the beginning has been hopeful.

Harvey was left paralyzed from the chest down after a mountain biking accident close to home in July. He’s spent time since in an operating room, intensive care unit and rehabilitation center.

Recently, he returned to his made-over home that accommodates a lifestyle no one saw coming.

He says tireless efforts from loved ones, contacts in the construction industry and perfect strangers made it possible. An online fundraiser has collected close to $322,000.

“Everyone from home nurses to home therapists have been amazed about what has come together in such a short amount of time,” Harvey said last week. “It’s unheard of. There really are no words for how amazing people have been.”

Among the improvements are widened door frames, a shower level with the floor and an elevator.

“It has everything to do with the generosity of others,” Harvey said. “We are so grateful.”

When he recalls his homecoming, however, it’s his excited children and wife that fill him with the most joy.

“The fact that I was coming home that day was very emotional, because I couldn’t wait to get back to being a husband and father,” he said. “To come around the corner and see what they had done made it so real.”

Eighth-grade Windham Girls Scout Troop 10051 decorated the house and sponsored “pumpkins of support,” in which members of the community adorned pumpkins with inspirational messages for the entire family.

“Months later and the community is still here,” Harvey said. “There are so many people who have made it clear they’re here for us for the long haul.”

Thinking back to the day his life changed, memories are blurry.

“I remember going out for a ride that morning. It was a beautiful morning,” he said. “I remember looking up at the trees blowing in the wind afterward, waiting for help and wanting my feeling and motion to come back.”

A friend of Harvey’s eventually found him down on the ground. First responders estimate an hour and a half elapsed before the discovery.

A medical helicopter brought him to a hospital near Boston.

“The first time I heard my wife’s voice, just hearing her voice talking to me with the EMTs around was so comforting,” he said. “I knew that she was there and that I was starting to get help.”

That assistance and even more that followed has allowed Harvey to get back to his life — outings to support his daughter at a lacrosse game and his son during hockey.

Watching them play, and even coaching, was once the norm.

He does not believe it needs to be a thing of the past.

Harvey’s goal, he said, is to gain enough strength to switch from a motorized wheelchair to a manual one. He would like to continue volunteering in some capacity and supporting those who have been by his side.