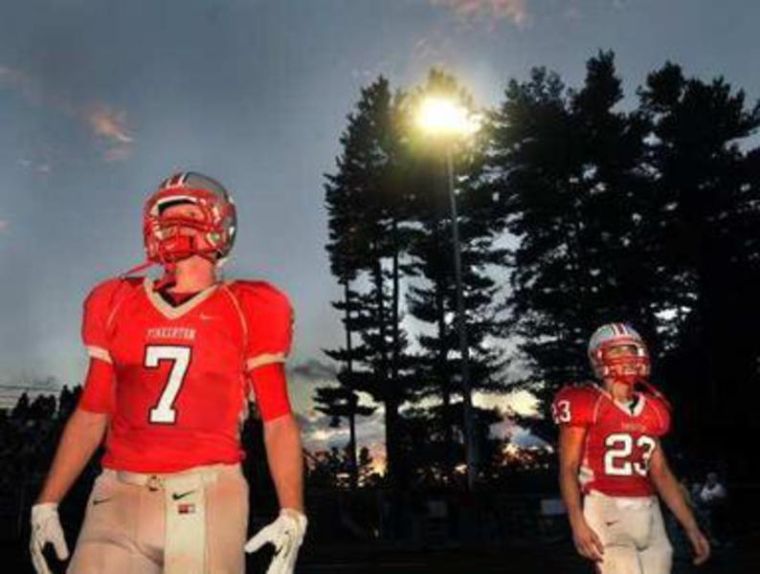 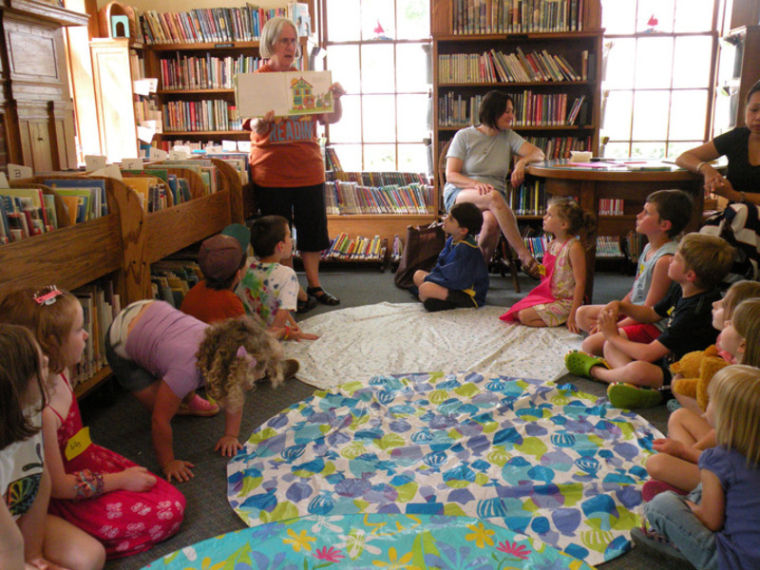 Linda Merrill, director of Taylor Library in East Derry, reads a story. The library was threatened with closure when the town administrator wanted to eliminate its funding. 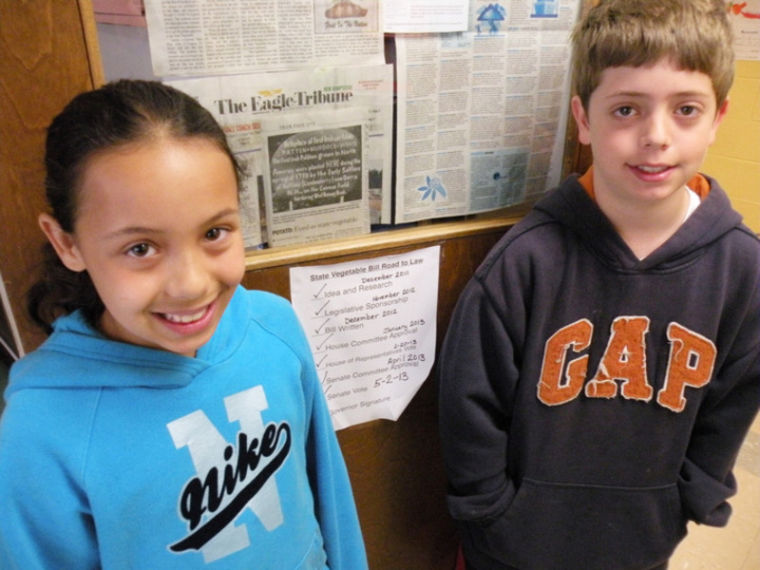 Derry Village Elementary School fourth-graders Olivia Pavao and Peter Barden stand before a display of students' efforts to have the white potato named the state's official vegetable. They succeeded. 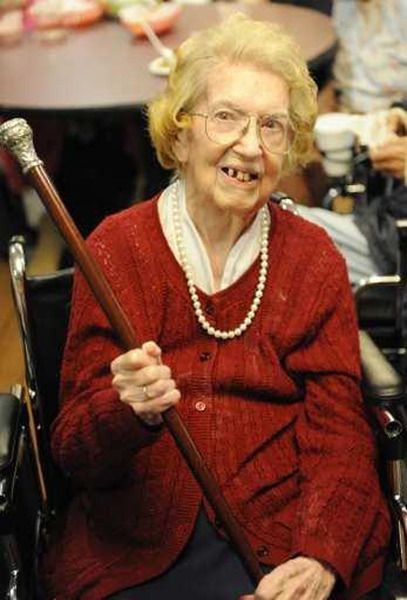 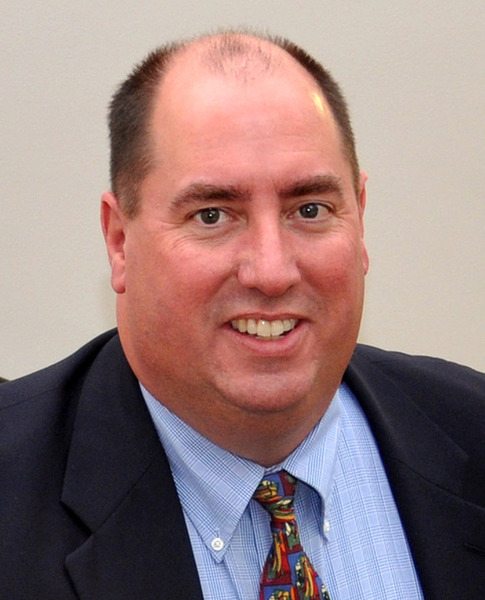 Linda Merrill, director of Taylor Library in East Derry, reads a story. The library was threatened with closure when the town administrator wanted to eliminate its funding.

Derry Village Elementary School fourth-graders Olivia Pavao and Peter Barden stand before a display of students' efforts to have the white potato named the state's official vegetable. They succeeded.

DERRY — The year brought new faces to the Town Council, many split votes and divided meetings, and a former town administrator in trouble with the law.

Volunteerism was out in force during tough times, while businesses and organizations remained committed to helping those who struggle all year long.

Derry found a new Boston Post Cane recipient and almost lost a beloved library. The farmers market went off on its own, finding a new location in East Derry after splitting ties with the town. A local football field found enlightenment for the first time and residents took a stand to fight Dumpster Depot moving to Derry.

Here are some of the top Derry stories in the news this year.

He was put on administrative leave July 12, one day after that alleged incident.

The Anderson case kept town councilors tight-lipped for months about what was going on, or what direction they would take concerning Anderson’s relationship with the town.

Most councilors did remain quiet about Anderson details, but some spoke out about how the community was handling the case.

Councilor Phyllis Katsakiores said during that time that many people were concerned that Town Council meetings about Anderson had been held behind closed doors.

“Many think they should be more open,” she said. “They are not happy at all. They think there is just too much secrecy.”

Anderson, who earned $124,962 as town administrator, was awarded more than $40,000 in severance pay by the town at the time his contract was not renewed in October.

Assistant Town Administrator Larry Budreau served as acting town administrator in Anderson’s absence. He was the only person authorized by the Town Council to speak about Anderson. He continues to serve while councilors debate how to search for a permanent administrator.

Anderson is due in court in January.

Three new councilors joined the Derry Town Council in 2013, giving the group a divide when it came to many issues on the table at meetings.

Newcomers Tom Cardon, Al Dimmock and Mark Osborne, along with Council Chairman Michael Fairbanks often became the majority voice when it came to voting on issues like selling downtown property.

Many council meetings grew heated with exchanges between the freshmen councilors and the established senior members Brad Benson, Neil Wetherbee and Phyllis Katsakiores.

A departing councilor’s goodbye gift did not sit well with many residents.

After serving nine years on the council, Brian Chirichiello stepped down this year and received his town-issued iPad as his farewell gift instead of the traditional rocking chair that was awarded in past years.

Former councilor Janet Fairbanks called for Chrichiello to return his gift, saying it’s town property and not something that should be awarded as a farewell gift.

“This is another example of blatant disregard and disrespect for the citizens of Derry by our local town government,” Fairbanks said earlier this year.

The Town Council approved the purchase of 10 iPads last year for councilors to use. The move was designed to cut down on the stacks of paper that traditionally make up meeting agendas and information booklets prior to meetings, and to save time for administrative staff.

When Chirichiello decided not to seek re-election, then-Town Administrator John Anderson said the former councilor asked if he could keep his iPad in lieu of receiving a chair. Chirichiello agreed to pay the difference in price between the chair and the iPad.

Chirichiello said it was a fair exchange.

“Just like every other councilor before me, all retired councilors received a gift of a rocking chair,” he said. “I have two at home so I thought I would ask that the money that would be used for my chair be used for the iPad.”

Chirichiello said he paid the difference and the town cashed his check.

It became official in 2013: The white potato is tops in New Hampshire.

The legislation followed a strenuous campaign led by local Derry Village Elementary School fourth-graders hoping to give the starchy spud its due at the state level.

Prior to the official status, students met with Derry Rep. John O’Connor, who offered lessons on how a bill was proposed and moved through the legislative process.

Derry Village teacher Amy Landry said it was a great lesson for her students to learn and they were excited to be part of the official legislative process.

Not in my backyard

Residents hoping to fight a proposed Dumpster Depot from moving to a facility off Ashleigh Drive put up a fight to halt the plan.

The Planning Board gave conditional approval to the plan in August, but residents began a quest to somehow stall the plan, saying the approval was illegal and Dumpster Depot would cause distress to nearby neighborhoods with smells, trash, and would cause property values to plummet.

Dumpster Depot could bring potentially 350 Dumpters to that land, something neighbors said was wrong.

With petitions and appeals in hand, residents worked hard for many months to find a way to keep Dumpster Depot away from that area of town.

Eventually, the Zoning Board agreed unanimously with an appeal brought forward by a resident group and said the Dumpster plan was not an allowed use in the town’s Industrial III zone. The issue remains on the table.

Anderson deemed the library’s $176,000 budget too much for the town to bear during the 2013 budget talks and said the downtown Derry Public Library could absorb the programs and patrons from the East Derry facility.

The community rallied around Taylor, including a cry for help from 15-year-old Adam Burke who asked town councilors to save his library.

In the end, the library was saved.

Taylor opened its doors in 1878 at the nearby Upper Village Hall and moved to its present location in the 1920s, a small brick building given to the town by Frederick Shepard Jr., grandfather to America’s first man in space Alan B. Shepard Jr.

Derry celebrated its oldest citizen in 2013. Dorothy Greene, 106, was named the recipient of the town’s Boston Post Cane in July. She received her cane in a ceremony at Pleasant Valley nursing center. Greene has lived there for several years.

The cane was given to Greene before a crowd including her family, friends and Pleasant Valley staff.

Town Council Chairman Michael Fairbanks did the honors and gave Greene her cane, a replica of the original Derry cane that is permanently housed at the Municipal Center.

Derry’s Farmers Market moved out on its own in 2013 following the end of the summer season.

The market was held weekly on Manning Street, but after the Town Council voted to drastically drop its financial support of the market, manager Bev Ferrante announced she would be entering a partnership with the Upper Village Hall and the East Derry Village Improvement Society for future markets.

The winter market is now in full swing on the first and third Saturdays of every month. Next summer, the market will continue to be located in East Derry.

Fans of Pinkerton Academy football finally got to watch the Astros run the field under new lights at the stadium. Lights were installed for the first time in 2013, giving football fans a chance to watch home games at night.

Pinkerton was the only Division I Class L school that had no lights on their main football field. The first night game was held Sept. 13 against Manchester Central High School.

Before that, Pinkerton played its home games on Saturday afternoons.

Money was raised through Pinkerton’s “Campaign for Excellence” drive. The lights cost about $150,000. The lights are energy efficient and environmentally friendly, officials said, and now give sports fans a new perspective when it comes to watching fall football in Derry.