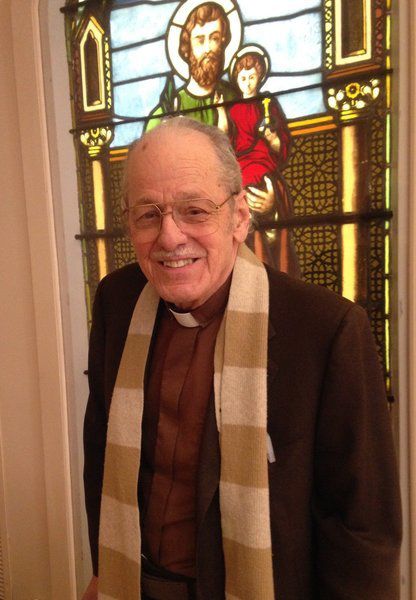 JULIE HUSS/Staff photoThe Rev. Roger Croteau stands near a stained glass image of St. Joseph at Holy Cross Catholic Church in Derry. Croteau is retiring and Holy Cross is closed, but he offers hope for the region and world during stressful times. 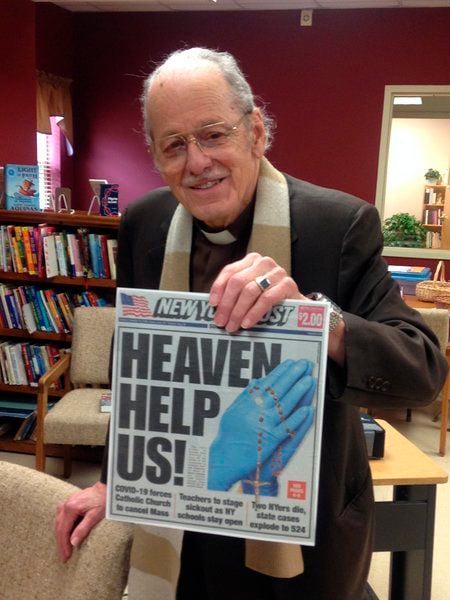 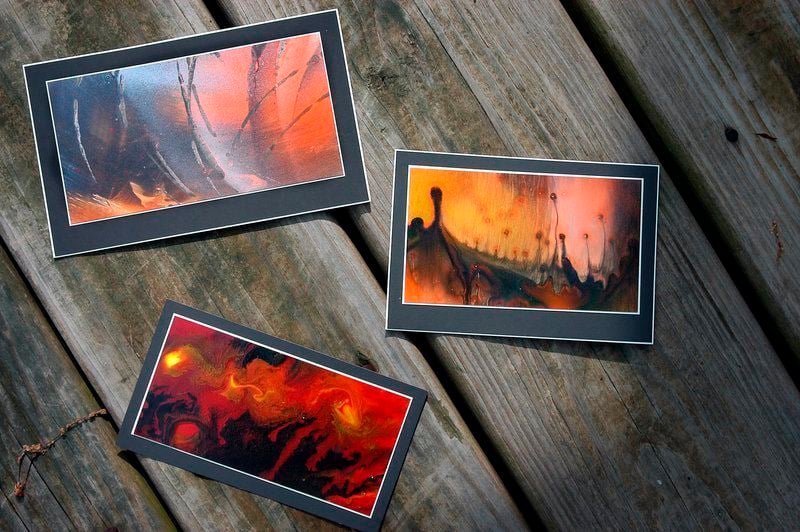 JULIE HUSS/Staff photoThe Rev. Roger Croteau stands near a stained glass image of St. Joseph at Holy Cross Catholic Church in Derry. Croteau is retiring and Holy Cross is closed, but he offers hope for the region and world during stressful times.

DERRY — The Rev. Roger Croteau once told the Derry News that his painting and artwork were a deep look into "some religious contemplatives" with a mystery deep within and a vision not yet clear.

But now the 81-year-old is looking ahead to what might be next for his own vision, with creativity, service and faith topping the list.

Croteau will be retiring after serving Holy Cross Catholic Church in East Derry since the church's inception 20 years ago.

Known by many as an accomplished artist with many works on exhibit around the world, Croteau is talking hope, service and what's ahead once the Holy Cross doors are shuttered for good.

The church remains closed, not only due to the new coronavirus, commonly known as COVID-19, but also due to a faulty sprinkler system, forcing the doors to close earlier this month.

On a recent morning at Holy Cross, only a single church staff member was on site handling some leftover church business.

Croteau walked through the large lower level of the church that morning, showing off tables full of his artwork laid out, geometric air-brushed designs with bold, intricate colors he was offering to his Holy Cross parishioners, a way to share his life's talents and joys while also a way to end two decades of what this parish meant to so many.

Painting since a young child growing up in Lawrence, Massachusetts, Croteau said his family was a strong one, and he learned a lot about art from neighbor friends and by frequenting museums to study the works of the masters.

He filled sketchbooks with his work, and many images are still displayed on the walls of his Holy Cross office, where he is surrounded by symbols of faith, gifts, knick-knacks and stacks of books, and papers. Many framed images are miniature sized, air-brushed with bold colors and all hosting a theme.

"That one is the 'Finger of God,'" he pointed out, adding often art "saved his life." He offered detailed descriptions of how he worked hard to get the water to flow just right in another image.

His artwork has been exhibited in collections all over the United States and Europe and he is proud that he once painted a portrait of President John F. Kennedy for the White House.

Saying art often was a lifesaver as a general thesis of his life, Croteau has had many experiences and challenges with former churches and positions including director of treatment at the Hillsborough Department of Corrections and chaplain and consultant for the Hillsborough County Nursing Home in Goffstown.

He also served as chaplain at the state prison in Concord and served at the Youth Development Center in Manchester among other administrative positions, including a founding member of the New Hampshire Commission for the Handicapped.

His journey to Holy Cross began with a dream put forward by a very dedicated group of people, he said.

"People were meeting in a school," he said. "I met all these great people."

The dream to build a new church on a hilltop in East Derry became a reality, opening in 2000 with Croteau leading his new flock of parishioners.

"It was a joy to be out of jail and work with these people," he joked, referring to his many years working within the New Hampshire prison system.

Two decades later, Holy Cross doors are closed for services, but Croteau heralds its accomplishments, the music, the vast sanctuary where he still films a Mass for parishioners to watch online during these challenging times of social distancing. He is proud of the church, it's beauty inside and out. He is drawn this one morning to stand near the stained glass image of his mother's favorite patron, Saint Joseph.

Before the coronavirus, Holy Cross was scheduled to remain open until after Easter, but would have closed later in April as per town rules about the sprinkler system.

Croteau calls the current challenges in the world a time he believes is God's way of possibly bringing people together, even in hard, difficult times.

"They can focus, they can help other people, we are obedient, caring for the elderly, reforming family life, all these are benefits," he said. "I think God had a big plan. And nobody is talking about politics."

Croteau noted maybe the big picture is all about correcting the world, something needed to bring people together.

His life has spanned countless experiences, challenges and professional journeys, and what's ahead may still be a mystery. But Croteau said God will be leading the way no matter what the journey brings.

He has three large bound scrapbooks compiled by his mother Laura, to chronicle her son's life, experiences and almost everything he accomplished detailed in countless news articles, souvenirs and other mementos of a life well lived.

Croteau can recite a lengthy poem with a moment's notice and often does, saying he has a photographic memory that serves him well when the time is right for some poetry, nearly 100 he says he knows by heart. He shared a favorite on this particular day, verbally offering the verse with hardly a hesitation.

He's not sure what is next but he knows he will be in good hands as he nears retirement.

"You go from day to day, it's the unknown factor. But God and divine providence will lead the way," he said. "I've had the most fulfilling life. I got to do all kinds of things, I was never bored. And I will never stop painting."