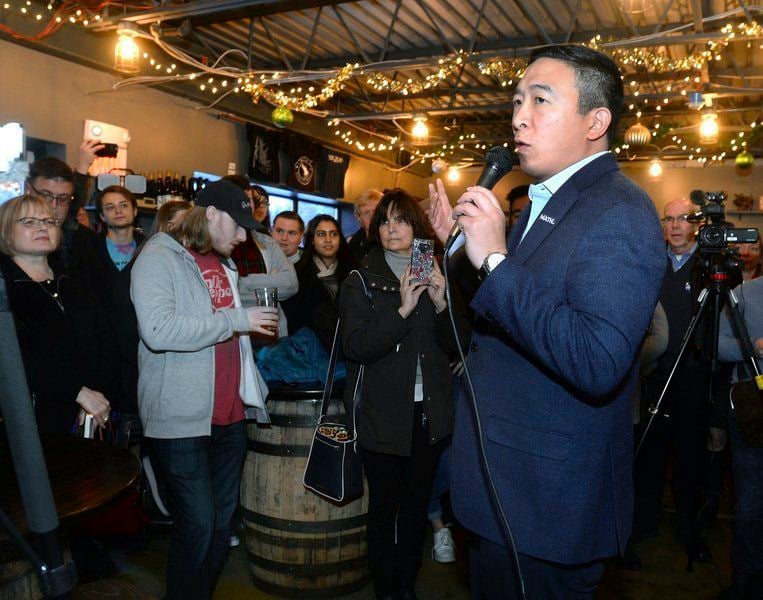 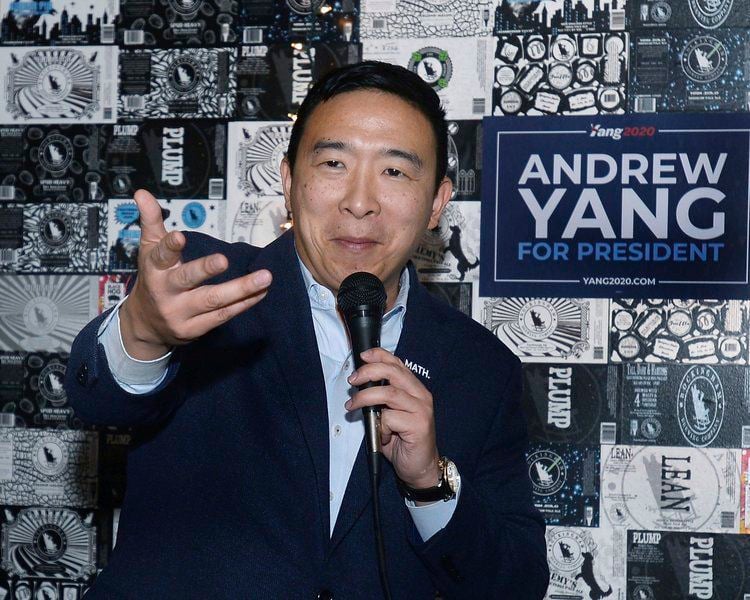 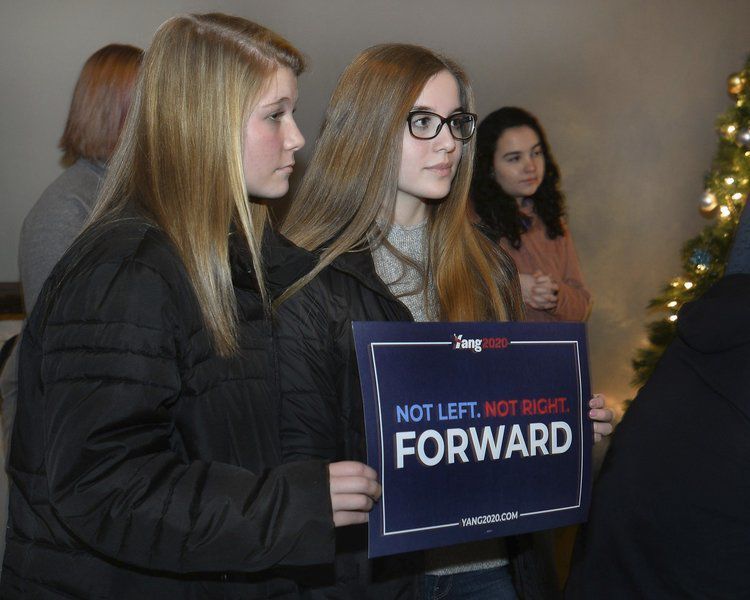 DERRY —The one word slogan was printed on stacks of signs and stickers scattered on a table — MATH — Make America Think Harder.

People crowding into the Rockingham Brewing Company heard that message Tuesday afternoon when Democratic presidential hopeful Andrew Yang came to town, drawing a big number of visitors to the Corporate Park Drive brewery to hear the candidate’s views on ways to make the nation smarter and more respectful.

The Derry visit was one of several stops Dec. 31 for the 44-year-old tech entrepreneur, ending with a New Year’s Eve event in Nashua.

For Yang, being able to stop by a local business made his visit to New Hampshire important. He thanked Rockingham owners Rob and Ali Leleszi for their hospitality.

The couple epitomizes what small business means, Yang said. Rockingham opened its doors in 2015 and celebrated an expansion last summer.

“I love small business,” Yang said. “It’s the lifeblood of every community.”

For about a half hour, Yang spoke surrounded by those tightly filling Rockingham’s tap room, offering a look back on his own personal journey to becoming an entrepreneur and founding his own nonprofit, Venture For America in 2011, working to bring thousands of jobs back to struggling cities around the nation.

For his Venture For America efforts, Yang was honored by the Obama administration as a “Champion of Change” in 2012, and in 2015 he earned an honor as a “Presidential Ambassador for Global Entrepreneurship.”

And now while traveling around the country, Yang said he witnesses states with major struggles, with automation taking over jobs and companies like Amazon and other corporate giants contributing to the closing of stores and businesses, while not paying their fair share of taxes, or none at all.

“The automation wave will tear our communities apart,” he said.

Yang heralded his own grassroots fundraising, raising millions to support his goal of becoming president.

“This is a campaign of the people,” he said, “to solve our problems.”

Yang also spoke of his Freedom Dividend plan — a universal basic income plan that would give $1,000 monthly to everyone over 18 to help spark the economy, while giving families a chance to also put money back in their own communities and businesses.

“With that money in our hands, we can strengthen our communities,” he said.

After ending his comments, Yang remained to sign books, signs and posters and have photos taken.

Derry resident Michael Hughes clutched a children’s book, “If I Were President,” saying he hoped to have Yang sign it for his 3-year-old son Costas.

“We’re trying to get as many (signatures) as we can,” Hughes said. “My wife got my son the book. And it’s good to come hear them speak.”

Others traveled from other states, coming to Derry to hear Yang share his views on the nation, the economy, and other policy ideas that impressed many.

A big fan of Yang, she said he is smart and rises above other candidates due to his real ideas and solutions.

“I think he’s very intelligent,” he said. “He handles all the issues with actual facts.”

For Yang, it’s all about the reasons he feels he is the best choice to win the presidency and beat the current president in 2020. That includes making sure America’s people are taken care of, respected, and valued for their hard work and family connections. It’s also about making smart policy decisions to support jobs and communities.

“It’s been a long few years but it’s about to end,” Yang said. “The opposite of Donald Trump is an Asian man who loves math.”