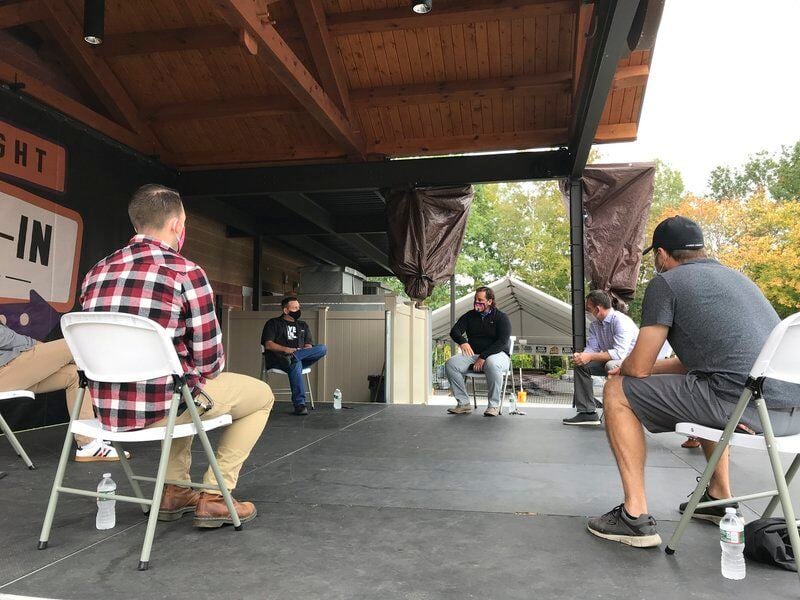 JULIE HUSS/Staff photoThe Tupelo Music Hall in Derry hosted a roundtable discussion recently, with a visit included by U.S. Congressman Chris Pappas, coming to town to hear about all the challenges entertainment venues are facing during the ongoing pandemic. 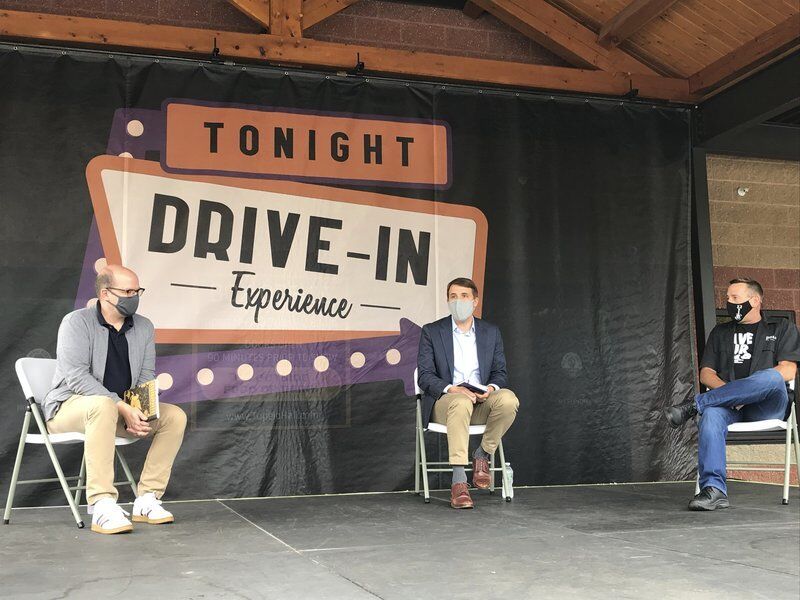 JULIE HUSS/Staff photoU.S. Congressman Chris Pappas, center, paid a visit to Derry recently, joining with representatives from state entertainment venues to hear about the challenges the entertainment business continue to face as the pandemic continues. At left is Matt Cahoon, of Pinkerton Academy's Stockbridge Theatre, and at right is Tupelo Music Hall owner Scott Hayward.

JULIE HUSS/Staff photoThe Tupelo Music Hall in Derry hosted a roundtable discussion recently, with a visit included by U.S. Congressman Chris Pappas, coming to town to hear about all the challenges entertainment venues are facing during the ongoing pandemic.

JULIE HUSS/Staff photoU.S. Congressman Chris Pappas, center, paid a visit to Derry recently, joining with representatives from state entertainment venues to hear about the challenges the entertainment business continue to face as the pandemic continues. At left is Matt Cahoon, of Pinkerton Academy's Stockbridge Theatre, and at right is Tupelo Music Hall owner Scott Hayward.

DERRY— The doors remained closed, and the seats are empty.

That’s what owners and promoters of the state’s entertainment industry continue to face as the pandemic rages on.

And sharing stories about those challenges joined supporters and staff from those industries in a roundtable discussion Tuesday morning, as U.S. Congressman Chris Pappas came to town to share in those stories and hear about the hardships during the coronavirus.

The roundtable, held at the Tupelo Music Hall in Derry, offered Pappas an opportunity to hear first hand what the industry is enduring, from shuttering venues to cancelling shows, having to let staff go, and having no funding to fall back on if rents are due and tickets aren’t being sold.

Pappas also talked about the Save Our Stages Act, a bipartisan bill Pappas co-sponsored that would provide financial assistance to keep independent live music venues across New Hampshire afloat, support workers in the industry and strengthen the wider economy tied to live music venues like restaurants, technical trades and vendors.

Since the ​Save Our Stages Act​ was introduced in July, bipartisan Congressional support has continued to grow. To date, 147 U.S. senators and representatives have signed on as co-sponsors of the legislation, which is aimed at providing relief to independent live venues, promoters and events across the nation that have been shuttered with no revenue and high overhead since March with no timeline for reopening.

In the Tupelo’s case, it’s been a struggle since earlier this year when the pandemic took hold, but owner Scott Hayward said his business has put innovative ideas in place to continue to support the venue, its staff and musicians who want to perform.

That includes a successful summer drive-in musical experience with many sold-out shows performed right in the venue’s parking lot off A Street in Derry.

Shows will continue all this month, and Hayward will then move some events indoors, keeping with safety guidelines and a much lower amount of seats sold.

Hayward is also highly involved in the Save Our Stages effort, saying the state has been supportive of the needs of the performance community.

“But what we had is essentially an entire industry that’s shut down,” he said. “And smaller venues are the breeding ground of all the bigger shows.”

Matt Cahoon is Director of Cultural Programming at Pinkerton Academy’s Stockbridge Theatre and now, when the theatre’s schedule would be full of live performances and concerts, Cahoon said the space is being used for Pinkerton classroom space and a lunch room.

“We gave up all our public performances,” he said.

The Stockbridge has a virtual concert series on tap this fall, Cahoon said.

“We were the first in the industry asked to shut down, and the last asked to open,” Cahoon said, adding it’s all about keeping the public safe, but concerns still arise about the staff and the loss of financial support to keep the venue viable.

Derry Town Councilor Joshua Bourdon said a venue like the Tupelo Music Hall and others around the state also have a direct effect on the economy in communities. He said Derry has worked hard to support businesses like this and help them succeed.

“We see the Tupelo as an anchor,” Bourdon said. “If we lost the Tupelo it would be awful for him, for the economy and set us back years. We need that support from the federal level.”

Pappas said it’s all about supporting the performance venues that not only bring the shows to town, but it’s also a ripple effect that stretches out into communities and their economic success.

“This is all about our economy, our identity,” Pappas said, “This is about our community.”

Hayward said he is thankful that legislators in New Hampshire are hearing the cries of the performance world and it is appreciated.

“It’s going to help,” he said. “It’s frustrating, but getting to tell your story, that’s hugely important”

Pappas said he is hopeful that support will continue to build in a bipartisan way.

“We will find a way to get support,” he said.