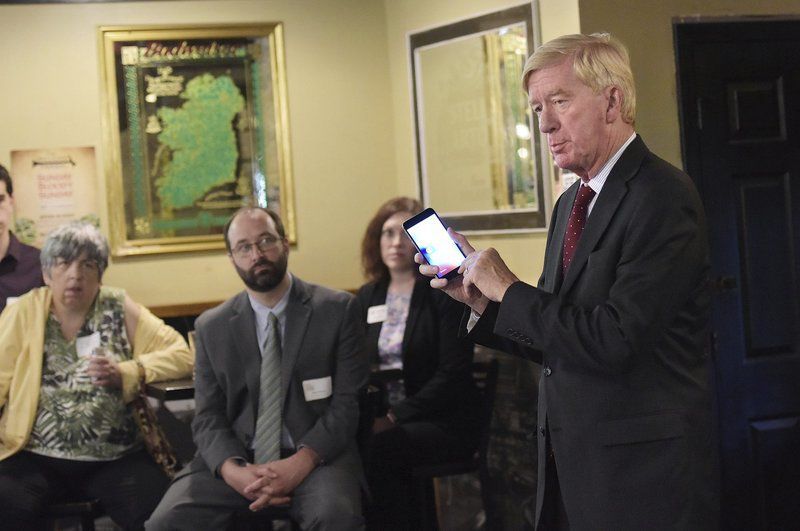 TIM JEAN/Staff photoFormer Mass. governor Bill Weld talks about how we should be able to vote using your smart phone to members of the Greater Derry Londonderry Chamber of Commerce during a visit to downtown Derry. 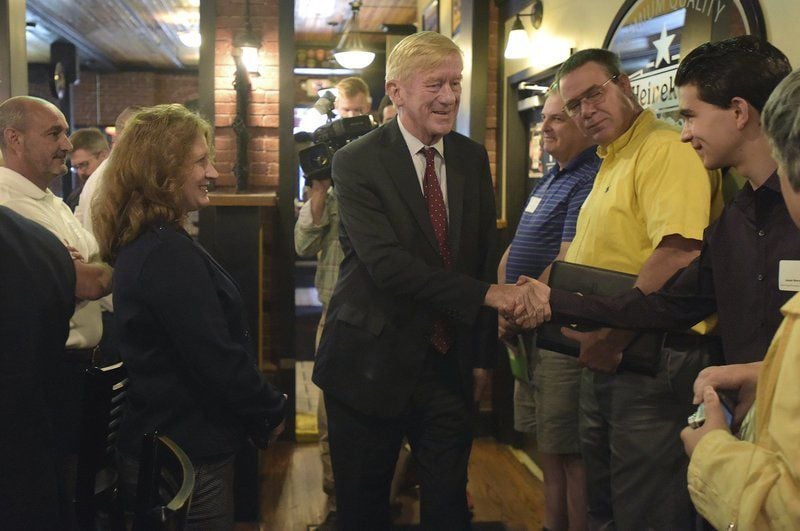 TIM JEAN/Staff photoFormer Mass. governor Bill Weld shakes hands with members of the Greater Derry Londonderry Chamber of Commerce during a presidential forum series. The event was held at Halligan Tavern in Derry.

TIM JEAN/Staff photoFormer Mass. governor Bill Weld talks about how we should be able to vote using your smart phone to members of the Greater Derry Londonderry Chamber of Commerce during a visit to downtown Derry.

TIM JEAN/Staff photoFormer Mass. governor Bill Weld shakes hands with members of the Greater Derry Londonderry Chamber of Commerce during a presidential forum series. The event was held at Halligan Tavern in Derry.

A former governor of Massachusetts hopes to give President Donald Trump a challenging run for the top office in the land.

The event was hosted by the Greater Derry Londonderry Chamber of Commerce, part of the non-partisan chamber’s presidential primary series of events.

Weld, a Republican, is running for president and made his way through Halligan’s downstairs bar area, shaking hands and greeting guests before speaking on why he wants to be president and what his main focus would be for supporting the country and its citizens.

And, if he took office Monday, he said already had a plan for success. Combating the trillions in national debt would make the list.

“Nobody in Washington, D.C. seems to care about that,” Weld said. “It’s irresponsible.”

Weld credited himself for keeping fiscal conservatism in mind, balancing budgets and helping drive Massachusetts out of its “Taxachusetts” label. The Wall Street Journal and Cato Institute also named him the most fiscally conservative governor in the country.

Weld announced his Republican run for the presidency back in April. He was also the vice presidential nominee in 2016 alongside former New Mexico governor Gary Johnson as part of a Libertarian ticket.

Now, as a Republican, Weld said he is concerned about what’s happening in Washington and wants to see change.

The candidate kicked off his chat with his own views on jobs, and how technology is gaining ground but also taking over positions. Robotics, drones, and other technology are now doing jobs once held by humans.

That means people entering more technological fields will need the specialized training to do the work, and those losing jobs to machines and technology will also need the skills.

Another issue Weld stressed is the importance of understanding climate change. The current president sums up his views of climate change in one word, Weld said. Hoax.

“He’s about the only person who thinks it’s a hoax,” Weld said.

Weld not only supports more clean air initiatives, and power sources like wind and solar, he also remains on the side of nuclear power, something he said could provide up to 25% of the power on the grid to supply electricity nationwide.

But with nuclear power comes the lingering concerns and questions about its safety and how to handle waste. But it’s something to consider, Weld said.

As for Trump and his love of the coal industry, Weld said sadly that industry is gone.

“He’s the only person who thinks the future of energy is coal and oil,” Weld said. “I would go in a very different direction.”

Weld also took a shot at the president’s views on immigration.

“I was always proud that we were a melting pot,” Weld said. “Mr. Trump seems to want a lily white nation. I consider that to be un-American.”

The candidate also stressed his views on healthcare and said the Affordable Care Act added 20 million people to the healthcare list, and that was a good thing.

But he supports giving people an opportunity to make their own health decisions, and said a healthcare savings option might work, where people could put away tax-free money to support their costs, like an insurance plan or retirement savings effort.

“Let people take matters into their own hands,” Weld said. “The system could be simplified.”

For those gathered to meet Weld, some said they were impressed. Weld took time during the more than one-hour visit to answer questions.

Lorraine Butler of Derry said she always likes to meet presidential candidates coming through the area, and added as a Medford, Massachusetts, native, she was also interested in hearing what the former Massachusetts governor had to say.

“And I will go hear everybody,” she said.

Charlie Zoeller of Derry he wanted to hear a Republican speak out about what’s going on in Washington, D.C., especially about the way Trump is handling his job.

“And counter to what the current occupant of the White House presents,” Zoeller said. “I’m hoping to see more of those people.”

Zoeller said he has met and heard several candidates speak so far as the presidential primary season moves forward.

“And there are a lot more choices on the other (Democratic) side,” he said.

Steve Dente of Derry said he leans independent but appreciates hearing presidential hopefuls on both sides. Living in New Hampshire also offers a unique perspective and more opportunities to meet the candidates in smaller local settings.

“I’m getting information, and the diversity is amazing,” he said. “And to me, you don’t get this opportunity in any other state. You don’t want to see that go away.”

Weld said he would be spending a lot of time in New Hampshire, hoping to meet as many voters as he can while spreading his messages of change and hard work needed to make the Oval Office successful. He said he is being greeted warmly and many ask him to “keep doing what you are doing.”

“The stakes are high,” he said.