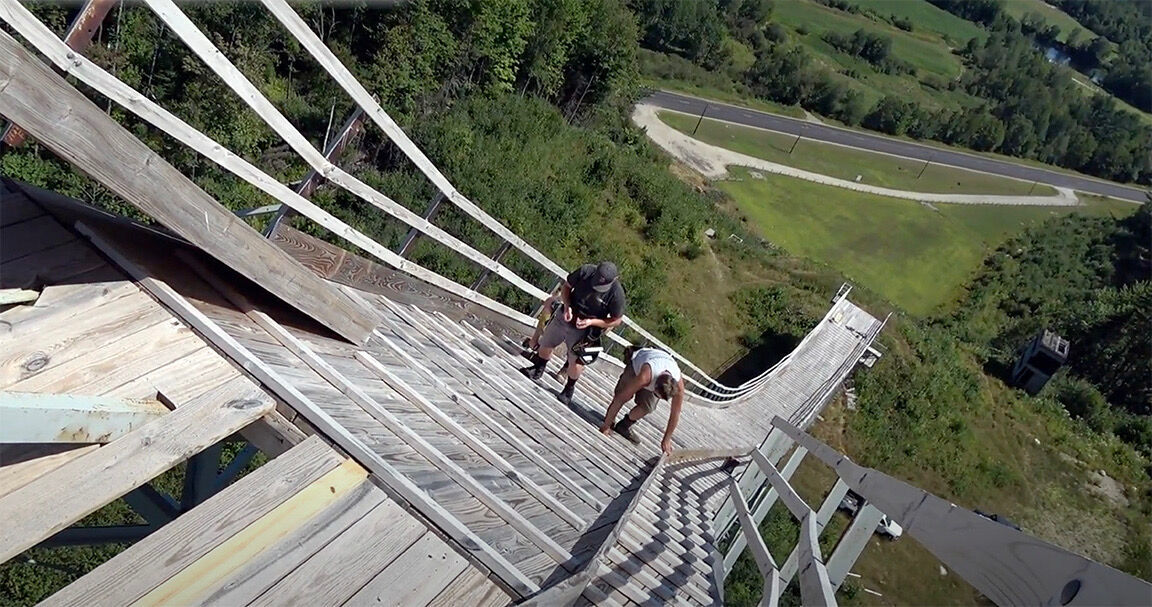 Before and after images of the in-progress restoration Big Nansen Ski Jump in Milan.

Before and after images of the in-progress restoration Big Nansen Ski Jump in Milan.

MILAN — An ambitious effort to restore what once was known as the highest ski jump in the world is progressing in New Hampshire’s North Country, but the project will require additional fundraising to enter the next phase.

The Big Nansen Ski Jump was built between 1936 and 1938 through a partnership between the National Youth Administration, which supplied the labor, and the city of Berlin, which provided the financing. Named for Greenland explorer Fridjof Nansen, the steel-tower structure stands 171 feet high with a 310-foot runway, and it is visible from Route 16 in Milan.

Scandinavians who came to the area to work in the paper mills brought with them a dedication to skiing, and they formed the Nansen Ski Club in 1882. Ski Club member Alf Halvorson led the effort to build the ski jump, which would attract skiers from throughout the world.

Big Nansen was the site of the first Olympic ski-jumping tryouts in 1938. The Fédération internationale de ski (International Ski Federation, or FIS), which had formed in 1924 during the first Olympic Games in Chamonix, France, held its world championships at Big Nansen in 1939, attracting 25,000 spectators. The United States National Ski Jumping Championships took place there in 1940, 1957, 1965, and 1972. The last jumping event occurred in March 1985, and the jump was closed in 1988.

By 2011, with the slope overgrown and the ski jump in disrepair, the state erected a historical marker at the site, and the jump was added to the National Register of Historic Places in 2019 in recognition of its architecture as well as its role in U.S. ski-jumping history.

Meanwhile, a Friends of Nansen Ski Jump group formed and, in 2015, began clearing the property of its overgrowth. With help from the New Hampshire Bureau of Historic Sites, they developed plans to restore the landscape and create a historic park with picnic areas and interpretative panels to present its history to those who were unfamiliar with the importance of the ski jump.

The Nansen Ski Club, now the oldest continuously operating ski club in the country, joined with the Friends to help promote the jump’s restoration and, in the summer of 2016, hired Knollstone Contracting to rebuild the staircase leading up the hill to the jump. They also exposed a terraced seating area below the landing. By December of that year, the crew began the process of re-decking the deteriorated wooden platform and run.

The project caught the attention of former world champion ski-jumper Sarah Hendrickson, whose parents had been star alpine and cross-country skiers at Plymouth Regional High School. With support from energy drink-maker Red Bull, Hendrickson and Anna Hoffman, a member of the USA Women’s Ski Jumping junior team, made runs down the restored Big Nansen in March 2017.

Bringing back the ‘Sleeping Giant’

The Nansen Ski Club received a $250,000 grant from the Northern Border Regional Commission in 2019 to assist in the revitalization of the ski jump. With matching funds through private donations and the state’s Moose Plate, the committee hired CBS Squared, Inc., to help design improvements that would allow sanctioned jumping events to return to the facility.

The New Hampshire Department of Natural and Cultural Resources also hired the local firm HEB Engineers, Inc., to design new code-compliant stairs to the jump structure, as well as to evaluate the ski jump in light of regular use. The firm found that some of the steel members were overstressed and will have to be replaced or reinforced. The state will cover the cost of a new steel staircase to the jump takeoff.

The local committee originally planned to do all the work in one construction season, but with the complexity of the revised plan and the increase in the cost of materials, the group decided to take a phased approach.

After having Nordic USA and ski-jumping coaches help to evaluate eight possible options, the committee selected a plan that provides the smoothest flight and softest landing but requires modifications to both the jump and landing hill. It also requires building a concrete retaining wall at the top of the slope to support what is called a “false knoll.”

The plan calls for two smaller jumps — a “bump jump” made of snow that would give younger skiers a taste of ski-jumping, and a larger “high school” jump for competitions. The committee has received a $40,000 Northern Forest Outdoor Recreation grant to do the small hill work, but the grant requires a 20 percent match from donations and in-kind contributions.

The groups hired contractor Lee T. Corrigan, LLC, to complete the Phase I improvements, at a cost of $315,000, and Corrigan also submitted the low bid for the “small hills” project, so the firm can continue on to complete the 40-meter hill in the fall.

“Both the profile work and the false knoll are so the ‘jumper’ would never be too far off the ground for safety reasons,” said Scott Halverson, grandson of the original flag-bearer, Alf Halverson. “In the ‘old days,’ that was less of a concern, so jumpers upon takeoff would liken it to ‘dropping down an elevator shaft.’ Modern ski jumping is much safer, and precise engineering is involved in every step.”

Halverson said the “small hills” project is separate from the Phase I work being done this summer. Originally, there would have been both a 40-meter and a 20-meter hill.

“The hills were designed by a premier ski-jump designer and the project put out to bid with the bid opening on July 30,” Halverson said. “The bids were much higher than expected, so the project has been reduced to the 40-meter hill alone. Even with this, we have had to broaden our fundraising appeal to close the gap between what we were awarded and what is needed, a shortfall of more than 50k. We have managed to do it with support from the state of New Hampshire and a significant individual donation.”

He said they are still on track for high school competition this coming winter. An event is scheduled for Jan. 23, 2022, as part of the 100th anniversary of the club’s first Winter Carnival.

“The main obstacle is money,” he said. “COVID has wreaked havoc on all budgets and estimates. We’ve been very fortunate to be awarded some grants and have received some generous donations, as well as some help from the state of New Hampshire. We have support regionally and nationwide from groups like New England Ski Jumping Nordic Combined (NESJNC), Eastern Ski Jumping Nordic Combined (ESJNC) and USA Nordic (USANS). We have high school coaches volunteering, chief among them Chip Henry of Kennett and White Mountain Ski Jumping (WMSJ), who has committed to coaching our kids and supervising our events.

Halverson added, “If you drove by or saw pictures of the jump in 2014, you’ll know what a miracle all of this is.”