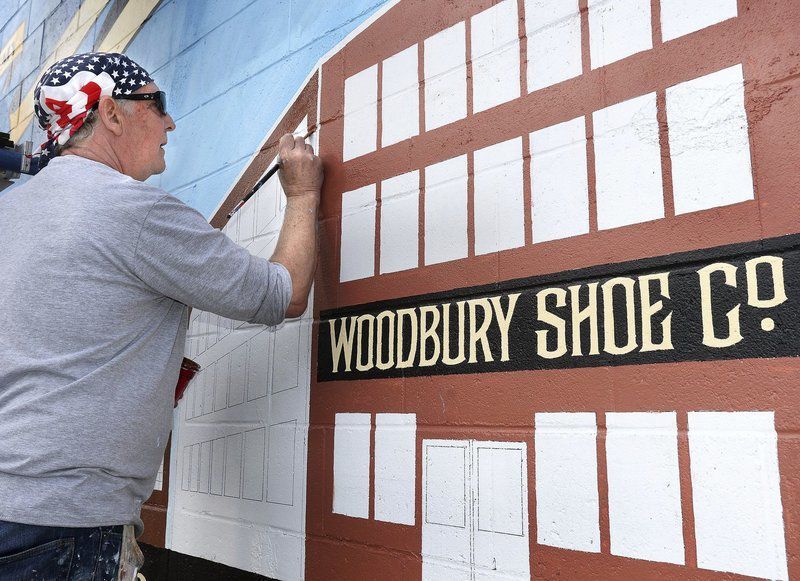 CARL RUSSO/Staff photoArtist Rodney Williams works on the detail of a building while painting the downtown mural now on Broadway in Derry. The completed mural shows the community's history and many prominent buildings and locations including Pinkerton Academy, Taylor Mill and First Parish Church. 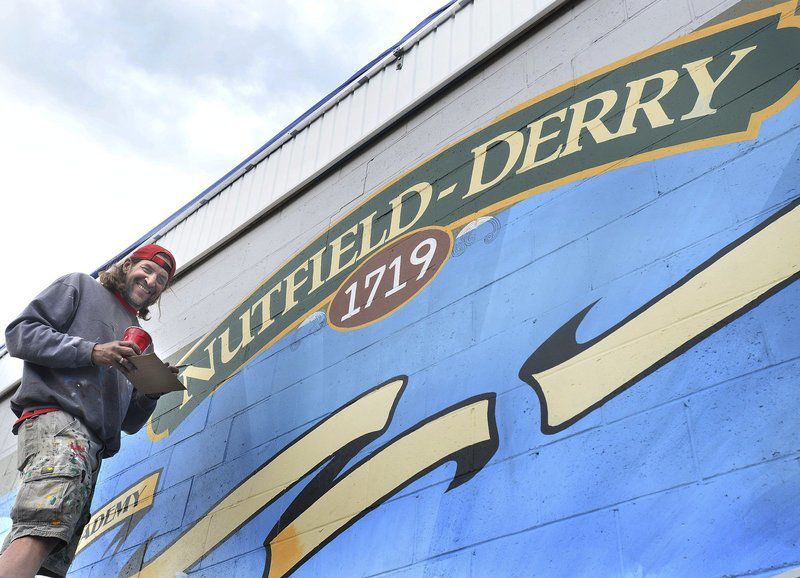 CARL RUSSO/Staff photoArtist Alex Falk works on the very top of the mural now complete in downtown Derry.  The historical mural was painted by visiting artists through the Walldogs mural project.

CARL RUSSO/Staff photoArtist Rodney Williams works on the detail of a building while painting the downtown mural now on Broadway in Derry. The completed mural shows the community's history and many prominent buildings and locations including Pinkerton Academy, Taylor Mill and First Parish Church.

CARL RUSSO/Staff photoArtist Alex Falk works on the very top of the mural now complete in downtown Derry.  The historical mural was painted by visiting artists through the Walldogs mural project.

DERRY — A new mural in downtown Derry puts the town’s history and prominent buildings in the artistic spotlight.

With the help of the internationally-known Walldogs mural movement, artists from all over the country descended upon downtown Derry recently to stage, organize and paint a colorful mural on the side of Cask and Vine at 11/2 East Broadway.

The mural shows Derry through the generations and some of the town’s most famed historical buildings and times, including the original Nutfield settlement in 1719, the beginning of Pinkerton Academy in 1814, and East Derry native Alan B. Shepard Jr.’s first American in space flight in 1961.

This year marks the 300th anniversary of those original Scottish-Irish settlers coming here to find a new home in the land they called Nutfield. Other prominent Derry buildings and places on the mural are Taylor Mill, Taylor Library, Adams Female Academy, the Derry train depot building and First Parish Church.

Last year, a community project — Spudcrows — took off to help support the mural. The scarecrow-like potato heads also pay tribute to the town’s first potato and also gave supporters a fun way to purchase the painted burlap potato face that could be filled, dressed and perched in front of businesses, homes, etc.

Hundreds of Spudcrows were sold last year and dotted the Derry landscape. Hundreds more will be sold this year.

Alana Wentworth, co-owner of Cask and Vine, said the mural will be a boon for Broadway.

“The mural is something we felt was the right thing to do,” she said. “People are spending time downtown because of the traffic on the rail trail, great energy from local businesses. Timing was incredible.”

The mural idea got its start as a way to support downtown public arts projects.

Visiting Walldogs artists started the process last week, putting up the scaffolding and each taking a portion of the mural to work on. The mural was completed over the weekend. Benson’s Lumber and Hardware in downtown Derry donated all the paint, Wentworth said.

Mike Leary of Dover came to Derry as part of the Walldogs mural work. He said community mural painting is quite popular in the Midwest.

Cam Bortz hails from Mystic, Connecticut, and said he has participated in dozens of community mural projects.

“Mostly all over the place,” he said, adding once the mural design is ready on a surface, the artists then come to town and do the final painting.

“It gives us an opportunity to get out of town and work in other environments,” he said.

Alex Falk came to Derry from Chicago and has many years experience in his own sign painting business. The artist said taking part in a mural project has many benefits, not just the joy of sharing painting talents but, as in Derry, getting to see a small snapshot of a community and learning about its past.

“It’s all about the history of the town,” Falk said.

Derry Town Councilor Neil Wetherbee, also an organizer of Derry’s downtown Homegrown Farm and Artisan Market located directly across the street from the mural, said it will give market foot traffic something great to see.

“We are just ecstatic to have this wonderful mural right across the street from our market,” Wetherbee said. “I really think the combination of all these things is what can help breathe new life into a downtown — the market, the mural, Derry Derby Day, Derry After Dark — they’re all things that help make Derry’s downtown unique and vibrant. I think it also inspires more people, both in the downtown and out, to have more pride in things that go on in the community and within the downtown. I think it hopefully gets more business owners on the bandwagon and thinking about creative projects of their own.”

The mural also fits in with Derry’s new cultural district designation in town, an area being earmarked to lead the way when it comes to highlighting the arts, culture, business and other things to attract people here.

The new district leads out in various directions from the downtown to include performing arts centers like Derry Opera House, the Tupelo Music Hall and the Stockbridge Theatre at Pinkerton, while also including areas that may also be ripe for artistic opportunities and growth including locations along the rail trail, the library, and other historical spots.

“We feel the mural is an incredible welcome to the historic downtown and it depicts how Derry became what it is today throughout its 300 years of incredible history,” Wentworth said.