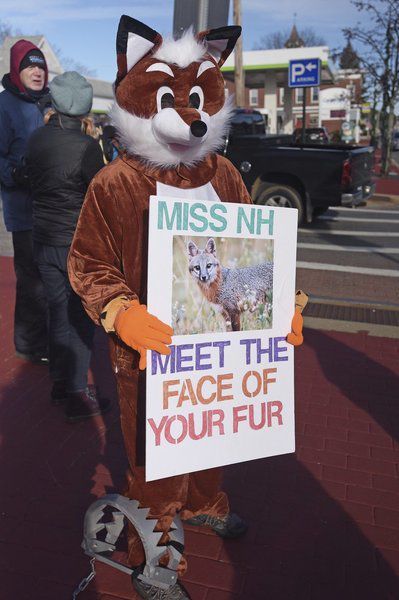 TIM JEAN/Staff photoA protester in a fox costume with a trap on its leg stands with other animal rights groups during a fur protest outside the office of Miss New Hampshire Scholarship Program on East Broadway in Derry. 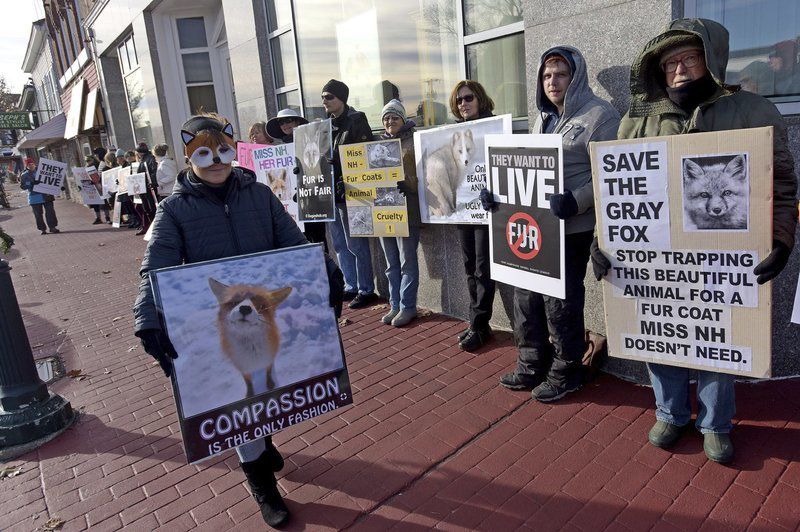 TIM JEAN/Staff photoKristina Snyder, left, a spokesperson for N.H.C.A.R.T., New Hampshire Citizens Against Recreational Trapping and other animal rights groups, led a fur protest outside the office of the Miss New Hampshire Scholarship Program on East Broadway in Derry on Black Friday. 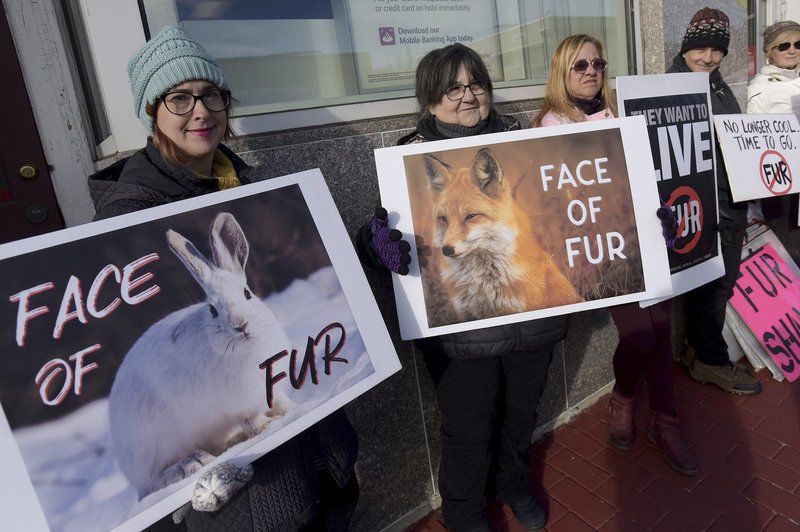 TIM JEAN/Staff photoA protester in a fox costume with a trap on its leg stands with other animal rights groups during a fur protest outside the office of Miss New Hampshire Scholarship Program on East Broadway in Derry.

TIM JEAN/Staff photoKristina Snyder, left, a spokesperson for N.H.C.A.R.T., New Hampshire Citizens Against Recreational Trapping and other animal rights groups, led a fur protest outside the office of the Miss New Hampshire Scholarship Program on East Broadway in Derry on Black Friday.

DERRY — It was the traditional “Black Friday” for some savvy shoppers hoping to find holiday bargains.

For others, it was a day to protest the trapping of animals for fur, targeting one New Hampshire organization that continues to award a fur coat as a major gift.

Every year across the nation, groups participate in Fur Free Friday efforts on the big shopping day after Thanksgiving, encouraging people to say no to fur as gifts during the holiday season.

The most recent protest combined that effort and another taking on the Miss New Hampshire organization.

The protesters lined the sidewalk, holding signs showing trapping photos, and animal images as cars passed by on Broadway, some blowing horns in support while other drivers shouted remarks in opposition. One protester was dressed as a fox, with a trap attached to its leg.

Organizer and animal rights supporter Kristina Snyder said awarding the fur coat to Miss New Hampshire every year is a tradition that needs to stop.

She was among a larger group of protesters early this year standing outside the Stockbridge Theatre at Pinkerton Academy where the Miss New Hampshire competition was held.

Snyder said she met earlier this year with Claudette Jolin, vice president of the Miss New Hampshire organization, saying Jolin was “adamant” that the organization would continue having trappers as sponsors and would accept the fur coats as a top prize for the new titleholder.

The organization has supported the Miss New Hampshire program for about 26 years.

“We are the shepherds of the animals,” Pennell said earlier this year. “We go out and we try to keep the wildlife on an even keel. We have huge success stories of managing wildlife.”

Pennell said the animal activists have information about the state’s trapping regulations and all it involves, but continue to spread their own information that he felt was often misleading.

Bill Haggerty, president/co-executive director of the Miss New Hampshire program, said the Derry office was closed Friday but the organization was made aware of the protest.

He said demonstrations have happened more frequently in past years and the Miss New Hampshire organization respects the right to protest.

“We respect their position regarding trapping and certainly their right to demonstrate,” Haggerty said in an email. “But we do not have any plans to end our almost 26-year relationship with the New Hampshire Trappers Association.”

Haggerty said some information spread by protest groups on social media can be misleading.

And the young women who take the top crown and are named Miss New Hampshire every year are given the option as to whether they wish to accept the fur coat, Haggerty said.

“The Miss New Hampshire Program is about so much more than a fur coat,” he said, adding the program awarded $77,000 in scholarships earlier this year to 29 young women who participated in the competition.

Snyder’s parents, Patricia and John Snyder, came to Derry from Durham to participate in the downtown protest.

They both said their daughter has been a longtime advocate of animals and their safety.

It’s about education and making people aware of what trapping entails.

“We like to educate people, educate about fur and how cruel it is,” she said. “Miss New Hampshire doesn’t need a fur coat. We don’t blame the girl, we blame the organization. They should put an end to it.”

For Snyder, it’s a way of doing something she cares deeply about. She hopes things will change with so much information and social media efforts spreading messages about trapping.

She remains dismayed that the Miss New Hampshire organization continues to accept fur coats from trappers, saying holding on to “such cruelty” is not a sound business decision.

“We support the (Miss New Hampshire) organization, they do wonderful things with scholarships, et cetera,” Snyder said. “Just stop the fur coat and leave the animals out of it.”