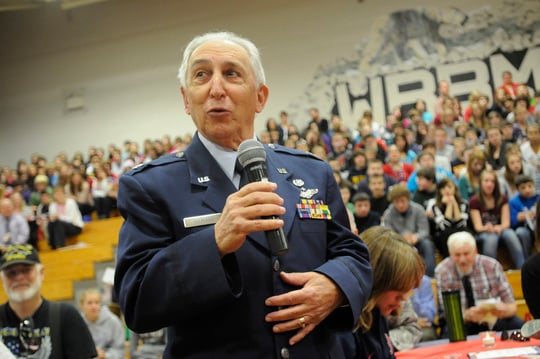 Joseph DiChiaro of Derry, the longest serving veteran at the breakfast with 38 years, shares a story with the students at West Running Brook Middle School Monday morning. 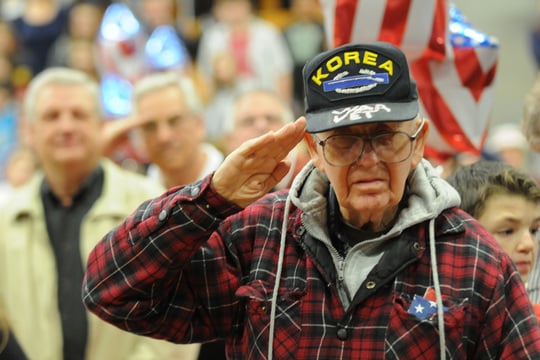 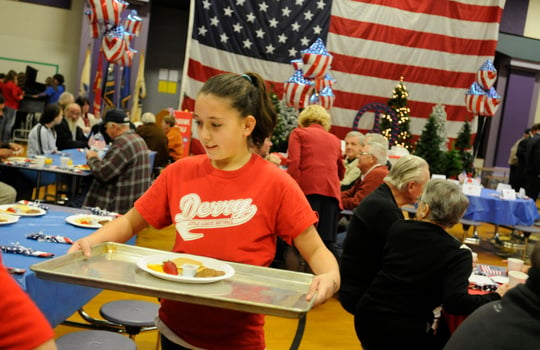 Joseph DiChiaro of Derry, the longest serving veteran at the breakfast with 38 years, shares a story with the students at West Running Brook Middle School Monday morning.

DERRY — A fist clutched tightly over a heart, a tear shed and flags waving proudly from students in celebration.

It was a lesson in patriotism at West Running Brook Middle School Monday when the school hosted its fourth annual "Home for the Holidays" Veterans Breakfast and Salute.

Principal Leslie Saucier welcomed guests and spoke about the symbols associated with Veterans Day and patriotism.

For Nathan Laughton, it was a chance to share breakfast with his dad, Barry, a Vietnam War veteran.

"It's very good to thank our vets with what they've done," the 12-year-old said.

Nathan and his classmates listened to patriotic songs and learned the history of what veterans accomplished in the country's many wars.

A special POW/MIA table was set, sitting alone and waiting for the soldier who never returns.

Other activities included a musical medley of various military service organizations and their respective anthems.

There were a few scattered World War II vets, standing tall when their anthem played.

Others represented the ranks of the Korean War, Vietnam War and Desert Storm.

It meant a lot to be there.

Ken Waite said he appreciated what the students had done. He served four tours of duty in Vietnam and said it was a difficult time.

"If you'd been in my shoes when I got home from Vietnam, you'd understand," he said.

Joseph DiChiaro served 38 years in the military, 32 in the Air Force and six in the Army. This was a special day.

Gov. John Lynch attended the breakfast and told students they should always remember what veterans have done for the country.

"It's important to honor our veterans because they have sacrificed so much for us," Lynch said. "They continue to sacrifice for us for what they did and ask very little in return."

As the ceremony ended, candles flickered for each name of a fallen soldier from New Hampshire. As the names were read, students placed the candles on a peace sign display.

Lynch said veterans should be celebrated every day.

"They continue to sacrifice for us for what they did," he said. "Our veterans here today are our true American heroes."