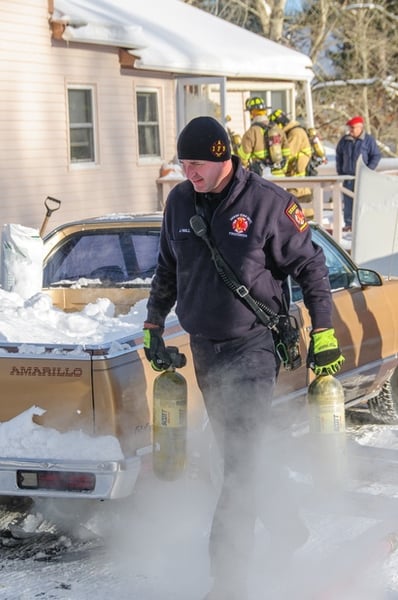 Derry Fire Engine 1 driver/operator Jason Hall carries empty SCBA bottles back to his engine at the scene of a fire Saturday at 5 Mount Pleasant St. Fire officials blamed the fire on the landlord using a propane torch to thaw frozen pipes. 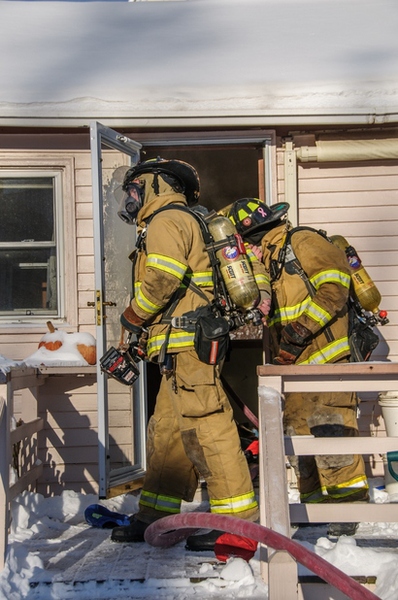 Derry fire Capt. Scott Haggart and Firefighter Tom Small prepare to enter 5 Mount Pleasant St. Saturday morning. The use of a propane torch to thaw frozen pipes is blamed for the fire. Five people were displaced.

Derry Fire Engine 1 driver/operator Jason Hall carries empty SCBA bottles back to his engine at the scene of a fire Saturday at 5 Mount Pleasant St. Fire officials blamed the fire on the landlord using a propane torch to thaw frozen pipes.

Derry fire Capt. Scott Haggart and Firefighter Tom Small prepare to enter 5 Mount Pleasant St. Saturday morning. The use of a propane torch to thaw frozen pipes is blamed for the fire. Five people were displaced.

DERRY — Battalion Chief Jack Webb said he and others at the Derry Fire Department were watching a television program Saturday morning that warned viewers about the danger of using blow torches to thaw frozen water pipes.

“We were actually joking about it before the call came in,” Webb said in an interview. “It’s just something you don’t do. Don’t ever do it.”

But when firefighters responded to the call about a fire at 5 Mount Pleasant St., they quickly learned that the blaze was ignited by the landlord attempting to thaw frozen pipes using a propane torch.

Clement Laplante, of 9 Windham Road, Derry, had picked the wrong way to get the water running in the two-family, century-old home — and it’s going to cost him, according to Webb, who estimated damage to the building at about $20,000.

Fire crews were able to quickly extinguish the fire after knocking down several exterior and interior walls to keep it from spreading. A team from the American Red Cross helped relocate the five adults who were displaced. With the piping and electrical systems damaged, Webb said, the building is uninhabitable until repairs are made.

Emergency crews treated a woman with a history of respiratory problems and transported her to Parkland Medical Center.

No formal action has been taken against the landlord, as the Derry Code Enforcement and Derry Fire Prevention Bureau continued to investigate the fire.

Upon arrival, crews observed moderate smoke pushing from the front of the house, from the rear apartment and from the eaves, according to Webb.

“The structure was a balloon-framed house with an apartment addition on the rear,” Webb noted in his report. “Crews also ventilated the structure while using air monitoring equipment to ensure that all carbon monoxide and hydrogen cyanide (toxic gases found in smoke) were removed from the structure.”

The building was occupied by two families, three adults and two dogs in the main house and two adults in the rear apartment, he said.

“None of the occupants had renter’s insurance or another place to stay. ... The damage of the fire was limited mostly to the structure itself and the occupants were able to recover the majority of their belongings,” he said.

Worse damage was averted by the quick response by his department, according to Webb. Londonderry, Hampstead, Salem and Chester fire departments provided station coverage and off-duty Derry fire personnel were recalled to their stations.

“Fortunately, there were two dispatchers on during this incident, because they had to dispatch 16 calls in Derry, Hampstead, Windham and Auburn that occurred while units were at this fire,” Webb said.

Webb said he hoped the fire would provide a teachable moment for impatient homeowners who have to deal with frozen water pipes — a common dilemma for the frigid winter that the region is now enduring.

“You have to be patient and let the heat get to the pipes,” Webb said. “The safest way to thaw a pipe is to open up any cabinet doors under a sink and put a space heater near by and let it passively warm up. Just make sure there are no combustible materials around the space heater. And crack the faucet to get a little water flowing through. Just let it drip.”

Firefighters responded to the call at 8:49 a.m., and the fire was reported under control at 9:43 a.m.

Derry police and the Salvation Army provided support at the scene.