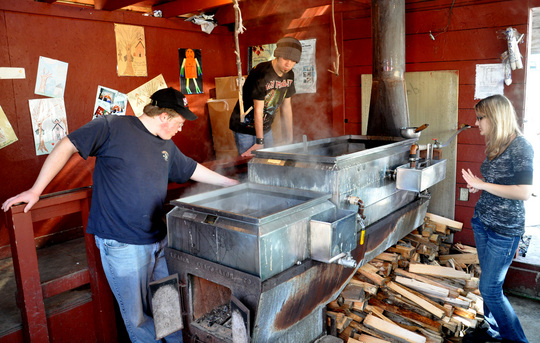 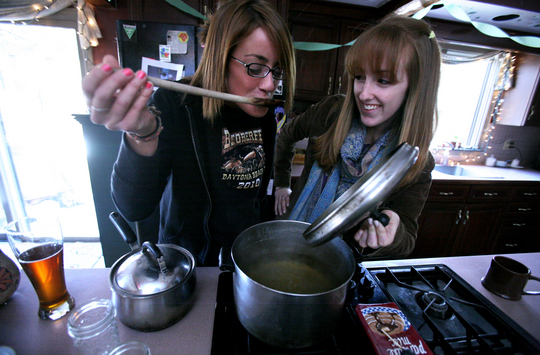 JAN LEE SEEGER/Staff photo Sisters Amy Curtin, 20, left, and Tristen Curitn, 22, test the sap that is boiling down in their kitchen.

JAN LEE SEEGER/Staff photo Sisters Amy Curtin, 20, left, and Tristen Curitn, 22, test the sap that is boiling down in their kitchen.

The sweet woodsy aroma escaping from the small building at the lower end of the Pinkerton Academy campus can't be beat this time of year.

Anyone who loves the sweet taste of homemade maple syrup may appreciate the daily drive of the school's environmental studies/outdoor skills students. They hover over a steamy evaporator in the small sugarhouse, learning about maple trees, sap, boiling times, and the finished product ready to be bottled and enjoyed.

Pinkerton students have spent years perfecting their maple syrup, tapping about 250 local trees with the bright red Pinkerton maple leaf bucket, and watching the sap flow through an intricate maze of tubing leading from one tree to another.

Senior Jeremy Hall stoked the fire underneath the large vat where the sap was boiling and bubbling as a tour group waited patiently outside the small shack.

The operation follows all state standards for boiling procedures and syrup production.

The curriculum is a popular one, according to faculty member James Lyon, who has led the syrup production for three decades.

"We've had a turnaround the last few days," Lyon noted, as earlier in the week the sap wasn't flowing to suit his taste. "Now we have more sap than we've had in 30 years.

This syrup science depends on certain weather patterns and temperatures, Lyon said. With the warmer days of late and still cooler numbers at night, it's a sap success.

On many mornings at Pinkerton, students host tours of their sugar house. Preschoolers from around the area stop by and enjoy a taste of that day's labor.

Once the product is bottled, Pinkerton staff members are happy to purchase the syrup, Lyon said. This year, he estimated production would be anywhere from 60 to 80 gallons, far ahead of last year's 21 gallons.

Sugaring is a good experience for his students, Lyon said. Not only does it give them a chance to learn this sweet craft, but it also hones public speaking skills when the tours come by, and also how to manage a business.

"And most of these kids will never make syrup again in their lives," he said.

The season will continue as long as the sap flows from tree to tube to sap collection area. The ever-sensitive season has been a good one for the Pinkerton producers.

"Many old-timers say when you hear the spring peepers at night, it's over," Lyon said.

In Londonderry, sugaring is a family affair for the Curtins, who tap 12 trees each March on their property.

"We've been doing this for six years now," mom Debbie Curtin said. "We bought the buckets from Hank Peterson."

Peterson is a longtime sugarmaker who owns a sugarhouse on Peabody Row in Londonderry.

Curtin's daughters Amy, 20, and Tristen, 22, help out when they're home from college on the weekends.

"Our oldest daughter, Leah, worked with Hank when she was 15," Curtin said.

"We boil the sap down on our kitchen stove in big pasta pots," Curtin said. "It's just a fun thing we like to do as a family."

She said they usually get just enough sap to make one gallon of syrup which she stores in canning jars.

"It's a precious commodity in our family," she said.