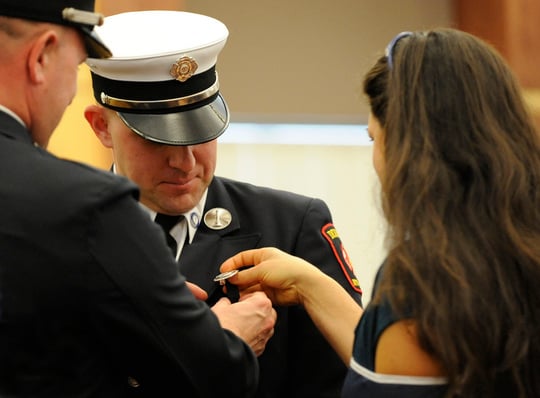 TIM JEAN/Staff photo. Lt. Shawn Haggart of the Derry Fire Department has his badge pin on by his brother Scott Haggart and Katie Harris during a promotion and recruit swearing-in ceremony at the Muncipal Center. 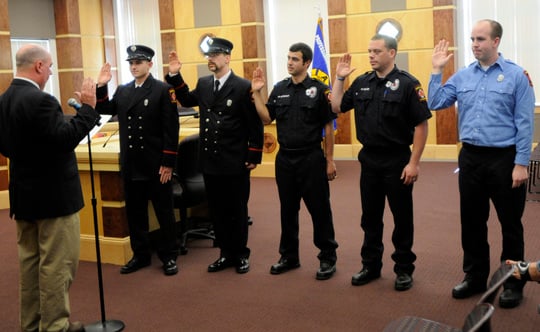 TIM JEAN/Staff photo. Lt. Shawn Haggart of the Derry Fire Department has his badge pin on by his brother Scott Haggart and Katie Harris during a promotion and recruit swearing-in ceremony at the Muncipal Center.

The pinning and swearing-in ceremonies took place at the Municipal Center.

Justin Hart and Jonathan Robertson were sworn in as firefighter/paramedics.

Thomas Beaumont and Donald Delude are new probationary firefighters and Shawn Shattuck is a probationary dispatcher.

"This is one of the most exciting times in my career," fire Chief George Klauber said, "to see new firefighters, new officers and new members of dispatch join us,"

Klauber read excerpts from a letter he received early in his career, saying firefighters are a unique group, a band of brothers, and always looking out for each other.

"No matter where you go or what you do, you are a symbol of the entire organization," Klauber read. "You are now truly your brother's keeper."

In addition to the new recruits, firefighter Shawn Haggart was promoted to the rank of lieutenant.

"Shawn Haggart is one of those people that can impact an organization right down to its DNA," Battalion Chief Michael Gagnon said. "This (promotion ) is a first for Shawn and there will be many more."

Haggart's brother, Scott, is a station captain at the Central Fire Station.

"The Haggart brothers is one of the best catches this organization has ever seen," Gagnon said.

Klauber said all the new firefighters worked hard and will be a great asset to the local team.

"Enjoy your job," he said to the newest members. "You are part of one big family. This has been a great day for the Derry Fire Department."