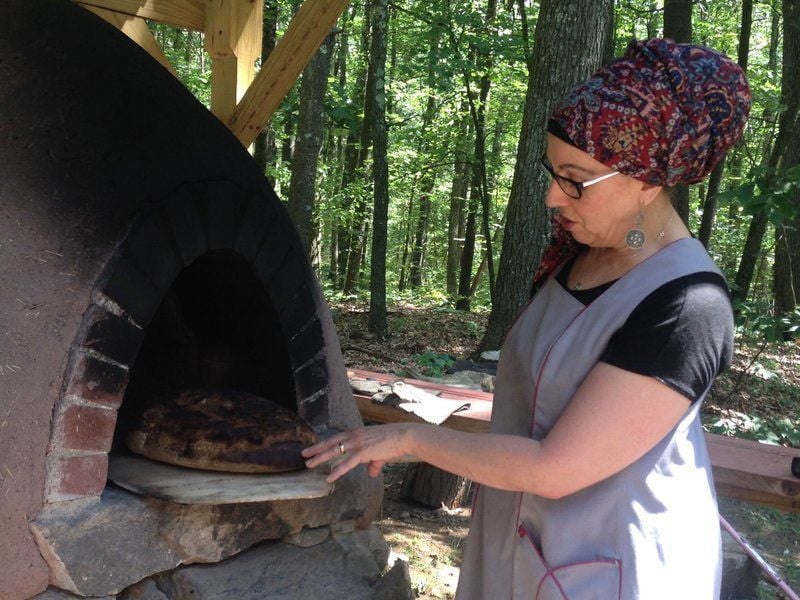 JULIE HUSS/Staff photoCheryl Holbert of Derry bakes bread in her outdoor oven during a recent baking class at her home. Holbert and her baked goods are a regular feature at the weekly Derry Homegrown Farm and Artisan market. 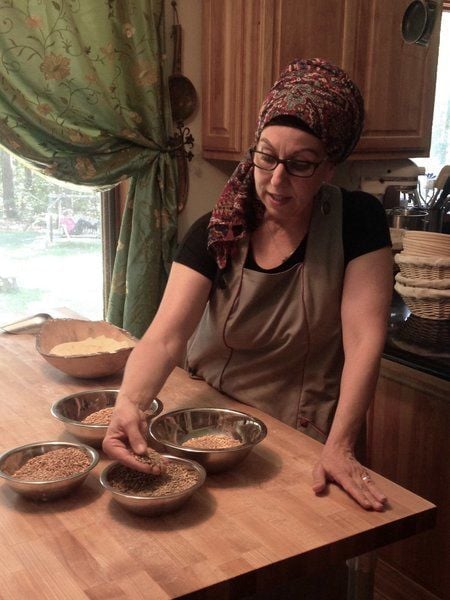 JULIE HUSS/Staff photoCheryl Holbert of Derry spotlights some of the organic grains she grinds in her kitchen prior to baking many types of bread. 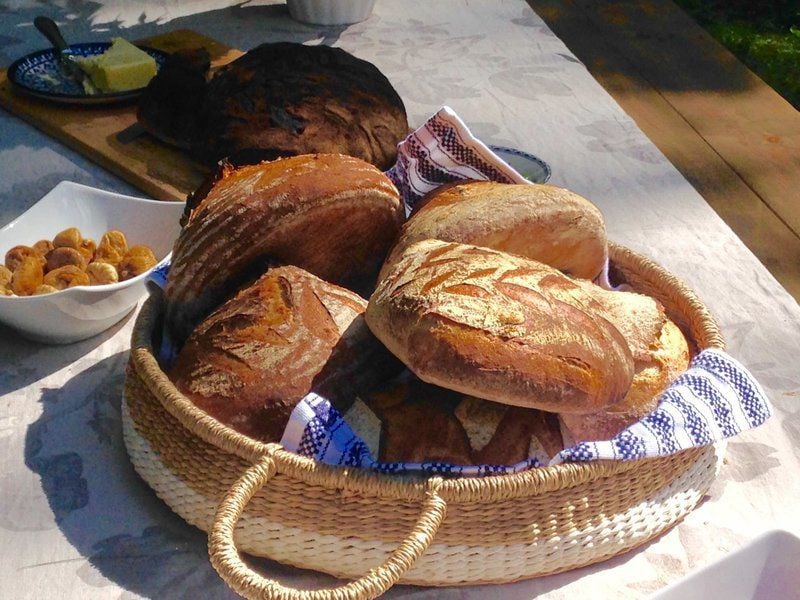 JULIE HUSS/Staff photoCheryl Holbert of Derry bakes bread in her outdoor oven during a recent baking class at her home. Holbert and her baked goods are a regular feature at the weekly Derry Homegrown Farm and Artisan market.

JULIE HUSS/Staff photoCheryl Holbert of Derry spotlights some of the organic grains she grinds in her kitchen prior to baking many types of bread.

DERRY — For Derry baker Cheryl Holbert, bread is her way of life.

Holbert owns and operates her home-based Nomad Bakery LLC, creating loaves of fresh bread made with love and honoring her own family upbringing and traditions that are blended and varied.

Holbert's creative breads, often woven with intricate designs and artistic flair, are a regular weekly feature at Derry's Homegrown Farm and Artisan Market and at other markets and outlets around the region.

She said baking bread is a lifeline, a way to join people over a simple loaf that often has much tradition and culture baked in.

Holbert grew up in New Jersey, born into a strong ethnic family representing many cultures, including eastern European and Persian influences.

"It's a mix, a real melting pot," Holbert said.

"It was so strong in my family," Holbert said. "I wanted to find out about my heritage, and the medium I used was food. I pored over baking books."

Holbert's grandmother was an expert baker, she said, making sure meals had enough bread to join the family together around a table.

"I recall a sense of familiarity and belonging," Holbert said. "The bread my grandmother made, it was how we were going to gather. Bread was like family to me, part of my religious and spiritual traditions, sacred to me."

Holbert met and married her husband Jerry, whose job as an editorial cartoonist led the couple to New England, eventually settling in Derry. Baking took a back burner for a while as Holbert said she explored her own career aspirations as a writer and artist.

"But I always knew how that sense of gathering around the table was a huge thing for me," she said. "The table, it was a sacred place, a family place. All aspects of life are worked out and experienced."

Once she became a mother, Holbert stayed home with her children and the baking began. Bread became her outlet.

"I wanted to make bread at its origin, what it meant to its culture," she said. "I couldn't get enough of that."

Holbert also explored the artistry of not only baking, but creating fiber art creations and wovens. She ran an art outreach program through the Currier Gallery of Art in Manchester, reaching out to refugees in that city.

She said those families were a lot like her own family while growing up, a loving mix of many countries, traditions and people. And food was their language and central to their culture, she said.

Holbert eventually became a "cottage" or home baker, calling her enterprise Nomad Bakery after people began to tell her to sell her breads.

With her children growing up, bread was her way of creating community and serving others in more ways than one.

She sells about 50 loaves every week at Derry's Homegrown Farm and Artisan Market. Holbert's bread is also for sale at the A-Market in Manchester and at Benedikt Dairy in Goffstown.

Holbert also opens her home kitchen on Berry Road to teach classes about baking bread. A recent class on sourdough drew about six students spending the entire day with the baker, eventually creating their own loaves and enjoying a day-end feast of home-baked bread, oils and butter.

That's what Holbert says she strives for — teaching people about the wonderful world of bread, teaching the technique, but also sharing in the final product around a large table where good taste and talk are key.

"That's my favorite part of the class," she said. "I take them through the whole process, and it brings us to the table."

All of Holbert's breads she sells are created and baked in her kitchen oven using organic flours and grains and as much locally grown product as possible. She also has a backyard stone oven she often uses to demonstrate a wood-fired way of making bread.

After the Derry market closes later this month, Holbert may begin a bread club to keep interested customers happy. She will also begin selling her bread at The Grind Rail Trail Cafe in downtown Derry in October.

Her next home class is Sept. 24, a pizza instruction class where she will teach wood-fired techniques along with ways to create unique pizza with fun toppings. Visit Nomad Bakery for information on upcoming classes at nomadbakery.com.

For Holbert, it's not just bread, not just a bakery, but a life experience that she hopes to share with people as they gather around their own tables.

"In that moment, it's something we share," she said. "That is the life of bread."